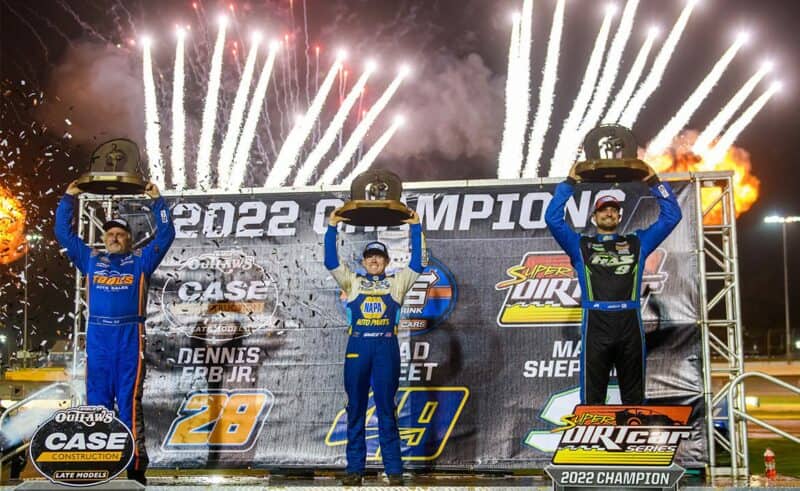 In the highlight feature of the weekend, a top-five finish by Brad Sweet allowed him to clinch his fourth consecutive World of Outlaws title Saturday night in Charlotte. Capitalizing on a pole start, Sweet led the first 10 laps and stayed ahead of points runner-up David Gravel for the rest of the feature, which was won by Donny Schatz. Schatz ended up bookending the 2022 WoO season; he won the first race of the year at Volusia back in February.

In the late model ranks, Jonathan Davenport used the high side of the track to take the lead and run away with a $25,000 win, his second consecutive finale triumph in World Finals competition. The win marked Davenport’s 22nd of the 2022 season and pushed him closer to a $2 million total in annual winnings with a big-dollar trip to Las Vegas still on the schedule for the No. 49 team.

. @dirtvision WINNER: In the Season Finale, it's "Superman" @TheFast49 who claims Victory!! @chrismadden44 took 2nd place, and @DennisErbJr rounded out the Podium! pic.twitter.com/LZen3zJFBt

Erb Jr., Sheppard and Sweet were all crowned champions of the World Racing Group’s three major touring series Saturday night, all three were storylines worth telling. Erb’s title was his first in a national touring series after 30-plus years of late model racing and was universally respected throughout the dirt racing community. And though Erb didn’t win a heat race or feature over the World Finals week, his No. 28 was running up front all three nights the late models were on track. Erb is absolutely a national ringer.

As for Sheppard, his historic run in Super DIRTcar competition got only more distinguished, as he became the series’ first nine-time champion ever as icing on a cake that saw the driver rack up 40-plus feature wins in a campaign that could well garner driver of the year honors from any dirt racing body.

And that leaves Sweet, who was the only eventual champion who actually had a title to clench on the racetrack this weekend. And clinch, he did. Sweet posted top-five finishes in all three World Finals feature and secured a clutch Dash win Saturday that put him in track position to keep Gravel’s final charge for any shot at a points crown at bay. No doubt about it, the No. 49 team was the best in the WoO ranks in 2022.

Schatz didn’t factor into the 2022 title race the way he or Tony Stewart Racing hoped after winning the season opener at Volusia back in February, but ending the season with consecutive feature wins was a surprising achievement.

Carson Macedo may have been the fastest sprint car in Charlotte during the World Finals, but never could capitalize. Macedo lost a sure-fire win Wednesday night to Logan Schuchart after his engine sputtered coming to the white flag. Then on Saturday, Macedo got collected in a dash-race incident involving family member Cole Macedo that took some attention off what was a controversial slide job on Gravel for position.

World of Outlaws regular Bill Rose failed to advance even out of the non-qualifiers race Saturday, having to use a provisional to make the start in Saturday’s World Finals feature.

The worst wreck of the weekend belonged to Anthony Macri Friday night, who not only flipped but then had the carcass of his car run over in the aftermath. Fortunately, Macri was uninjured and rebounded for a top-10 finish Saturday.

. @dirtvision REPLAY: A Terrifying incident early in tonight's Feature Race when @AnthonyMacri7 comes in contact with @Cole_Macedo18 which sets off a series of impacts… Incredibly Macri would Walk Away! #WorldFinals pic.twitter.com/76lUaQ2Yzt

The DIRTcar modifieds had to have a flip count of their own started on the first lap of the first heat race Thursday night, with Keith Flach going for a tumble.

. @dirtvision REPLAY: A Terrifying moment in the 1st Super DIRTcar Heat Race of the evening… @keithflach gets his bumper hooked with Louden Reimert and had a huge impact with the wall. Amazingly, He was unharmed in the incident. #WorldFinals pic.twitter.com/zKKzlZqhzd

Perhaps the ugliest incident of the week occurred after the checkered flag waved on Friday in the C-main, involving Jacob Dykstra and Dylan Westbrook. The video speaks for itself.

Weird one after the Checkered in the C-Main pic.twitter.com/DuC7YAheej

Speaking of music, hearing “Eye in the Sky” play for the DIRTcar and late model features while the sprint cars continued to have their four-wide accompanied by a nondescript guitar riff highlights how ridiculous the “Whiskey Myers” 4-wide salute is. Here’s hoping the band’s “major news” that was teased all week long on DirtVision in November isn’t continuing that program.

The audio on DirtVision Wednesday night was horrendous. In two years as a subscriber I’ve never had such an awful experience on the service. Apparently turning Wednesday into an actual race-day for the World Finals had some practical consequences for the staff putting on the event.

This is a pet peeve at more racetracks than Charlotte, but any track that’s going to use a two-seater racecar for fan rides needs to do the rides before or after the racing program ends. Interrupting features, heats, whatever for those hot laps, especially at a program like the World Finals that runs 6-7 hours a night is ridiculous to put fans in the stands through.

It was announced well before the end of World Finals week that the 2023 finals will again utilize a four-day format, with ticket renewals available throughout the program. This seems like it’ll effectively be the death knell for Cherokee Speedway’s attempts to run a race program in unofficial conjunction with the Finals; the track canceled their scheduled Sunday “Party After the Finals” weeks ago after the 2021 “Party Before the Finals” drew a paltry car count. The track stated they’ll keep looking for a way to make the event work, but asking teams to tow even further south after a four-day residency is a tall order.

This year's "Finals After Party" scheduled for November 6th has been 𝘾𝘼𝙉𝘾𝙀𝙇𝙀𝘿. Post-season festivities & team travel for other events, the event isn't practical for drivers, teams & fans.

We look forward to finding a solution for 2023 & beyond! pic.twitter.com/XvwzfdQBXb

Big-block modifieds entered for the Super DIRTcar Series program of the World Finals.

Super late models entered in the World Finals at Charlotte.

Where it Rated (on a scale of one to six cans with one a stinker and a six-pack an instant classic): We’ll give the weekend a solid four Bud Lights. Two of the three championships being decided headed into race weekend robbed the suspense from much of the World Finals, especially given this was a four-day event that was a marathon. Fortunately the dirt surface at Charlotte proved racy more often than not.

Up Next: The Flo Racing Night in America tour ends its 2022 campaign with a $53,000-to-win feature Saturday night at the Senoia Raceway in Georgia. Coverage can be found on Flo Racing. Shocker.