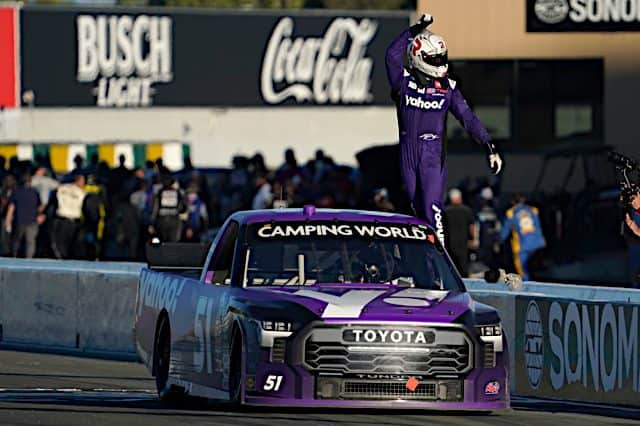 Kyle Busch Motorsports is shoring up its 2023 crew chief lineup, as it announced Nov. 9 that veteran crew chief Brian Pattie will join the organization as crew chief of the No. 51 Toyota in the NASCAR Craftsman Truck Series.

“I’ve known Brian since my early days in NASCAR and he’s one of the smartest and hard-working crew chiefs in all the garage, so to be able to bring a guy of his caliber to KBM is a huge win for our organization,” team owner Kyle Busch said in a team release. ” “He’s been a crew chief under the Chevrolet banner for the last three seasons at the [NASCAR] Cup [Series] level, so his knowledge of the way they operate and what tools and technologies they provide their teams will be very beneficial as we transition to that camp.”

“As a racer, your ultimate goal is to be in a position where you can win races and the opportunity to work with Kyle and the other drivers on the No. 51 truck is one that I just couldn’t turn down,” Pattie added. “I’ve known Kyle since the early 2000s when I was his crew chief for his first handful of Busch Series races and the same determination that I saw from him back then as a driver I’ve witnessed from afar as he’s built the most successful team in the history of the Truck Series.

“I’m very excited for the chance to reunite with him and grateful that he has the confidence in me to come in and help carry on the winning tradition he has established, which I plan to do for many years to come.”

Pattie will take over for Mardy Lindley, who mutually agreed to part ways with KBM after two seasons atop the pit box with the No. 51 team.

The No. 51 will be driven by Jack Wood and Busch in 2023, along with other drivers to be named.