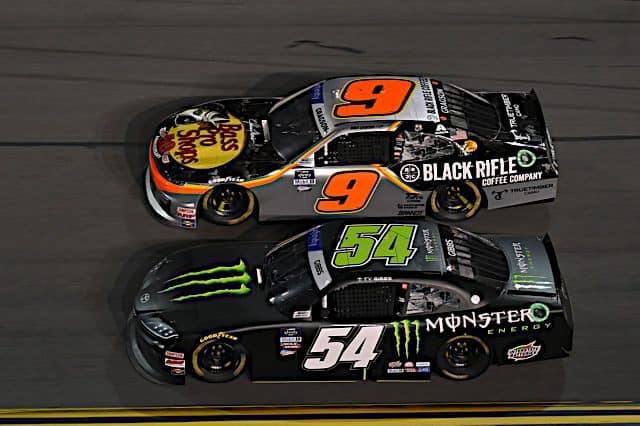 We blinked, and the 2022 NASCAR Xfinity Series was over.

The year was filled with excitement and dominance by three particular drivers. Of the 33 races this season, 20 were won by three drivers: Noah Gragson, who scored eight wins; Ty Gibbs with seven and AJ Allmendinger parked his car in victory lane five times.

For those who aren’t up to speed with silly season for 2022-23, all three of these drivers are expected to be in the NASCAR Cup Series in 2023. Gragson is going to Petty GMS Racing to drive the No. 42 Chevrolet after spending four full seasons in the Xfinity Series, all with JR Motorsports. Allmendinger is sticking with Kaulig Racing, but is trading in his Xfinity Series patch for a Cup Series one when he takes over the Cup No. 16 Chevrolet full time in 2023 after driving it part-time for two seasons. Finally, Gibbs is believed to be the successor to Kyle Busch in the No. 18 Joe Gibbs Racing Toyota, but no official announcement has been made.

Nearly two-thirds of 2022’s race winners are departing for the next level. It’s an understatement to call them each immensely talented.

Since 2019, Allmendinger has scored 13 Xfinity victories (of 15 total career triumphs in the series), including five wins in both 2021 and 2022. Gragson went winless in his 2019 rookie season before scoring two wins in 2020 and three in 2021. He exploded in 2022, leading all drivers with eight wins. Gibbs has 11 victories in 51 career Xfinity starts. They’re all successful and have accounted for 37 wins over the past four seasons.

Who succeeds them in the talent pool? The only direct successors to these drivers announced so far are Brandon Jones and Chandler Smith.

Jones has been in the Xfinity Series full time since 2016. He drove for Richard Childress Racing in 2016 and 2017 but joined Joe Gibbs Racing in 2018, where he had been since. Jones scored his first career win in 2019, another three in 2020, went winless in 2021 and scored a single win in 2022 at the spring Martinsville Speedway race. He has big shoes to fill as he takes over the No. 9 at JR Motorsports for Gragson.

Smith spent 2021 and 2022 with Kyle Busch Motorsports in the NASCAR Camping World Truck Series and previously drove a part-time schedule for KBM in 2019 and 2020. He defects from Toyota to Chevrolet, joining Kaulig Racing and taking over the No. 16 for Allmendinger. Smith will be teammates with Landon Cassill and Daniel Hemric.

Smith’s nine Xfinity starts for JGR in 2022 didn’t yield the best results, but moments of greatness were put on display and sometimes the results aren’t indicative of how the race was for him.

There seem to be two more options for JGR in 2023 — John Hunter Nemechek and Trevor Bayne. Nemechek made three Xfinity starts for JGR and an additional eight for Toyota-affiliated Sam Hunt Racing as he drove for KBM in the Truck Series full time. We know he isn’t driving for the brand-new Toyota-team TRICON Garage in the Trucks full-time in 2023, as he wasn’t a part of the announcement. He nearly won at Richmond Raceway in the No. 18 and had three top 10s for SHR. More often than not, Nemechek has proven he can win in the Xfinity Series.

Bayne had great runs for JGR in 2022 as well. He only finished worse than 13th once and finished outside the top 10 only twice in nine starts. The 28th-place finish at Atlanta Motor Speedway does not tell the entire story of his race, where Bayne spent most of the day in the top 10. Despite running infrequently, he meshed well with JGR equipment right out of the gate.

Could JGR’s lineup consist of Bayne, Nemechek and Smith? That would be a stout group of racers. Although JGR will probably have one all-star car again like the No. 18 was this year.

We already know that Big Machine Racing signed Parker Kligerman to drive the team’s single entry full time in 2023. At Texas Motor Speedway in May, Tyler Reddick scored the team its first-ever victory. Reddick demonstrated several times that the No. 48 Chevrolet has the speed to contend for top 10s and wins regularly.

Throughout 2022, the Power 12 teams consisted of full-time drivers from JRM, Kaulig, Richard Childress Racing, JGR and Stewart-Haas Racing. RSS Racing’s Ryan Sieg was on an island on his own for most of the season between the Power 12 teams and the rest of the midfield. But Reddick proved Big Machine Racing is more ready to get into the mix with the powerhouse teams.

Kligerman brings that readiness and experience to win. He’s done it in the Truck Series the past several years with Henderson Motorsports. With Kligerman driving the No. 48 full time in 2023, BMR has joined RSS Racing at the upper echelon of the midfield.

Then there’s Hailie Deegan. Where does she end up? She’s still a Ford driver, but her Truck team is no longer with Ford. Does she stay in Trucks with a different Ford team, or does she make the jump to Xfinity with a Ford team there? Does Stewart-Haas roll out a second car for her in NXS, or does she drive for SS Greenlight Racing, who she made her debut with this year?

Many people have doubted Deegan’s abilities as a stock car driver, as she did not produce the expected results in her Truck Series career. However, in her first Xfinity start at Las Vegas Motor Speedway last month, she piloted her car to a 13th-place, lead-lap finish. She told NBC Sports post-race that she felt she could move around much more than the Truck Series. Maybe she’s one of those drivers where the aerodynamics of a stock truck doesn’t click with them, but a stock car does.

Of course, let’s not forget how strong Sam Hunt Racing looked this season, particularly when Nemechek, Smith or Jeffrey Earnhardt were driving. Smith is no longer available, but SHR could be a viable landing spot for Nemechek. He’s had several strong runs with the team over the past two seasons. Earnhardt has also had strong showings with the team, albeit not as often as Nemechek, but is still far better than others. Like Big Machine Racing, SHR has shown playoff-contending speed but can’t join the top echelon of the midfield with BMR and RSS Racing without a full-time driver.

Compared to recent seasons, the Xfinity Series in 2022 was one of the deepest fields of drivers and teams. 2023 could be just as competitive, if not more. Depending on how off-season signings turn out, we could see a couple more cars possibly added to the list of regular contenders. With rookies like Sammy Smith and Chandler Smith joining the series full time and veterans such as Kligerman and Nemechek also in the mix, the 20-win void that the three Cup-bound drivers leave will have no shortage of potential drivers to fill the gap they’ve left behind.