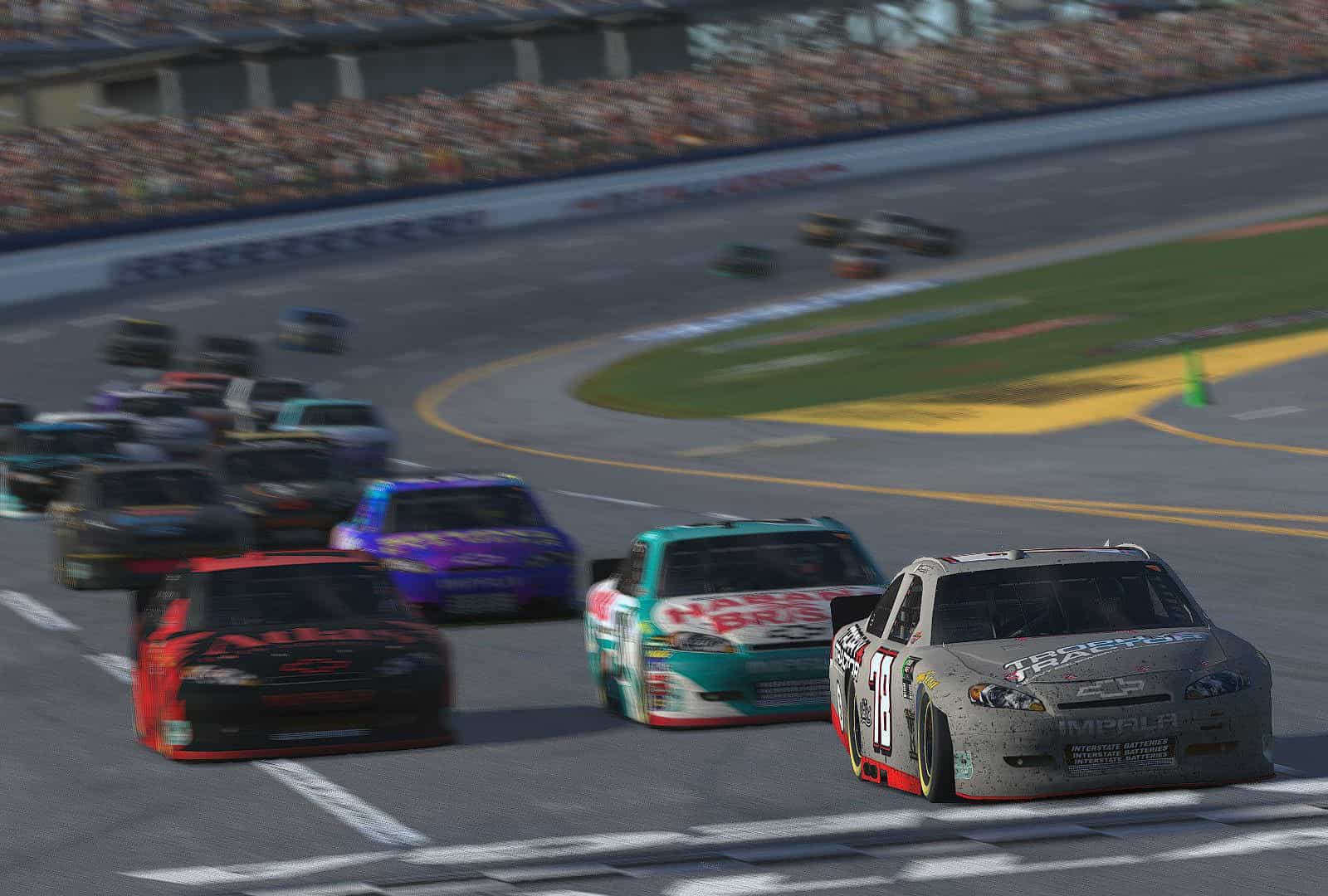 This MNR Review is presented by Monday Night Racing.

The Interstate Batteries Monday Night Racing Pro Series kicked off its first race of season six on Monday, Nov. 7, with Garrett Smithley taking the victory in the Car of Tomorrow at virtual Talladega Superspeedway.

In case you missed the broadcast, you can check out the full race here, as well as the race recap from Frontstretch‘s Brandon Hauff. Also, head on over to the Frontstretch YouTube channel for the post-race show.

There was quite a bit to take from the Proceller8 300, from Smithley getting back in virtual victory lane, to newcomers making a splash, to reigning MNR champion Presley Sorah’s strong finish. Let’s take a deeper look into these and what we could expect from future events this season.

Smithley claimed the win after staying mostly behind the frontrunners all evening. On the final restart, he saw an opening and took the lead from David Schildhouse.

It was Smithley’s first win in the league since July of last year and the fourth of his MNR career. It’s also one that was not easy to obtain, as he had to avoid multiple crashes, including one in the last two laps. Additionally, he had to get around Schildhouse, who appeared to have control of the race before the last restart.

It was a bit of relief for Smithley, as he will now race for the title when the playoffs begin in January.

As for Schildhouse, he seemed to have carried over some momentum from last season after winning at Homestead-Miami Speedway in the season five finale in August. He was up front early and often, taking turns for the lead with Adam Cabot and others throughout the race. He overcame a speeding penalty and found his rhythm with the Cup Series’ Car of Tomorrow, showing he’ll once again be a championship contender this season.

Like Schildhouse, season five champion Sorah also maintained momentum, on paper at least. Sorah finished fourth, overcoming a lot of bad luck. From missing his pit stall to getting caught up in incidents, it looked like Sorah was not off to a great start in defending his title. However, he persevered and threaded through the final crashes to take home a top-five finish. If he keeps this up, he’ll be a championship favorite once again.

2. What About Some Other Series Regulars?

NASCAR Xfinity Series driver Anthony Alfredo found himself battling for the lead in the last half of the race. He first went side-by-side with Schildhouse with about 44 laps to go. Later, Alfredo and Collin Fern fought for first place, though Fern wasn’t able to maintain the momentum. Fern got caught up in an crash that saw Will Rodgers tumbling on the track. Then, Alfredo himself ended up in a big wreck with less than 16 laps to go.

It may have been a tiring night for Fast Pasta, but like Sorah, Alfredo fought through adversity and took home a eighth-place finish. He showed exactly why he was in the hunt for the championship with Sorah in season five.

Another returning driver, Ryan Vargas, also joined the frontrunners around the halfway mark. He led multiple times before eventually falling back with older tires. Though a 14th place isn’t what Vargas had hoped for, it’s still a worthy effort in a field of 42 cars. Plus, Vargas showed that he can lead some laps and be a contender at a place that they’ll return to at the end of the regular season (albeit in a much different car and package).

The MNR newcomers were visible from the start, as Chase Cabre earned the pole position. Unfortunately, Cabre was caught up in an incident with Bailey Turner later in the race. Cabre ended up 22nd, two spots further back than fellow MNR rookie (and Camping World Truck Series driver) Christian Eckes.

It was a rough outing overall for the rookies, with Connor Barry being one of the first to get in a big wreck. Barry, who is the 2022 iRacing Off-Road World Champion, retired early from the race with too much damage; his fast repair was gone even earlier.

Several motocross/supercross racers also joined the series this season, including 2020 AMA 450MX champion Zach Osborne, who was the next rookie to retire early. Osborne bounced off the outside wall and then ran into the inside wall, ending his night with about 56 laps left.

Another motocross rider, Joey Savatgy, ended up 37th. Let’s just say the COTs weren’t kind to the two-wheel riders Monday night, especially since it was run at the 2.66-mile Talladega with speeds exceeding 240 mph.

Lastly, Natalie Decker finished 38th after dropping out of the race. Like the other newcomers, she was involved in a few incidents that caused a lot of damage to her car.

Can the rookies bounce back next week at Twin Ring Motegi? Maybe; after all, Cabre did show that he has speed. Of course, he also has more iRacing experience than some of the other rookies. It will be interesting to see how well the drivers will adapt to the different tracks and cars this year.

Needless to say, at Talladega, there’s usually a lot of crashes (except for the fall NASCAR Cup Series playoff race this year, but that’s another story). Combine a racetrack like Talladega with the COT, and you’ve got drivers with a handful in the draft. Oh, and these cars don’t have restrictor plates on them, so they go upwards of 240 mph. That’s insanely fast, so no wonder why we saw so many crashes and incidents.

Though there were some crashes in much of the first half of the race, there were very few cautions for these. This was likely because the race was so long regardless, at 300 miles. Plus, at the time, the field was broken up into several packs, so some of the wrecks were far away from the leaders.

As the race and intensity wore on, the cautions started coming essentially right after every restart. It seemed almost like a wreck-fest in the last half. There was even a crash in the last two laps, despite the race ending under the green flag.

The lack of consistency in calling for the yellow flags in this race was a bit odd from race control. Apparently, some of the drivers didn’t like some of the calls by race control either. It was a new team calling the race, as previous administrator Josh Mendoza had left at the conclusion of season five. However, it was announced Tuesday (Nov. 8) that Mendoza will return as race control next week.

5. How Will This Race Compare to the Regular Season Finale?

The regular-season finale is Jan. 3 at the same venue, but this time with the Next Gen cars. There will probably be a lot of wrecks in that race as well, since the cars will be slower and closer together. However, there may also be times when the cars will just run in a line; in this case, pit stops under green flag conditions could be troublesome for the rookies and other drivers not used to it.

The intensity will really be ramped up that time at Talladega, with just one last shot to win before the playoffs start. It’s similar to NASCAR having Daytona International Speedway as the Cup Series regular season finale; it’s always exciting to see cars run in a pack with any driver having a shot to steal a last-second playoff berth.

However, why not go to a place like North Wilkesboro Speedway? There’s eight regular season races this season — do a quarter of them really need to be superspeedways? Short tracks can be exciting, too, and they could use the older cars for it. If the series wants to stand out more, it should consider making the last race before the playoffs either somewhere different or someplace less random and less of a wreck-fest than a superspeedway.

Here’s the rest of the schedule: