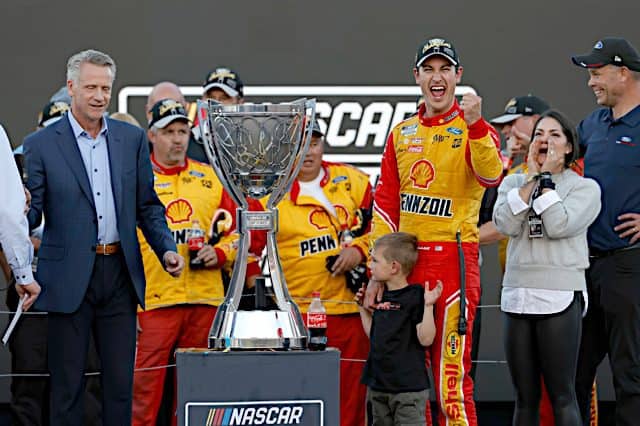 Who would have won [the Cup Series championship] in the Winston Cup Format? Something tells me it would not have been Joey [Logano]. – Clyd, YouTube

Well, I hope that “something” also tells you Powerball numbers, because you’re spot-on. According to Twitter user @NWCS_Standings, if the traditional Winston Cup points format (used between 1972-2003) were still in place, Hendrick Motorsports’ Chase Elliott would have taken home the big trophy despite his mid-race tangle with Ross Chastain in the Phoenix Raceway finale.

In fact, the Georgia driver would have locked up his second Cup Series title merely by starting the final race in Phoenix.

Or wait — technically his first, since Kevin Harvick would have been the champion in 2020 had that season run according to Winston Cup points. And actually, it wouldn’t be Harvick’s second either …

Hot take alert: it doesn’t matter. At the end of the day, there’s only one 2022 NASCAR Cup Series champion, and it is always and forever going to be Logano and the No. 22 team.

Is that really fair, since Elliott and the No. 9 crew were the best in the sport throughout the majority of the season?

Yes, it’s fair. They all knew the rules when they signed up, how many points each position is worth and when winning a race is all that matters. If you want to see a series without that confidence, just look at F1’s (accidentally) title-deciding Japanese Grand Prix and try to tell me NASCAR is the inconsistent one. Everyone’s working from the same rulebook, but when it comes to the championship, to quote Ricky Bobby’s favorite movie, there can be only one.

Or maybe Lightning McQueen said it best: “one winner, 42 losers.” (Damn, remember the days when there were 42 losers?)

It’s commonly-repeated in YouTube comments sections that had there never been a Chase for the Cup, Jeff Gordon would be a seven-time champion, and Jimmie Johnson wouldn’t be. Frankly, I’m not so sure.

If Chad Knaus and Johnson didn’t need to prioritize the last 10 races of the season every year after 2004, they wouldn’t have. But when prioritizing the last 10 races was what the format demanded, they were far, far better at it than anyone else.

If there’s one thing to take away from the fact that the champion has won the season finale every year since 2014, it’s that championship-caliber teams rise to the occasion and meet the points system where it is. No matter what the Dawsonville Pool Hall tweets, Logano is the only true champion of 2022. Nice try, Elliott , you’ll get ’em next year.

Is the playoff system silly? Yes, absolutely. I’d support a return to a full-season format as much as the next person, and, dear reader, I won’t try to argue that nobody would tune in to Phoenix if the title had already been decided. A NASCAR race is a NASCAR race, even with the championship already decided.

But I still don’t think it’s worth considering these alternate-history points calculations as anything more than a fun gimmick for novelty Twitter accounts. To that point: if NASCAR used F1 or Mario Kart 8 points, Chastain would have been the champion.

Final 2022 Cup Standings with F1 points (2022 format with no FL) after Phoenix. Ross Chastain would clinch his 1st title under this format with a 3rd place finish in the finale pic.twitter.com/obbInRsNJM

Will NASCAR be consistent with its penalties next year? – Aaron Elijah Colyer, YouTube

I’m fairly confident in this answer, and I’m sure it’s the one you’re expecting: no.

Even other rules have been unevenly applied: Noah Gragson and William Byron got post-race penalties for intentionally wrecking rivals at Road America and Texas Motor Speedway, respectively. Bubba Wallace earned a one-race suspension at Las Vegas Motor Speedway, and Carson Hocevar and Ty Gibbs both got the benefit of the doubt.

"I'll give him the penalty if he comes back to me."- Denny Hamlin after contact with William Byron costs him spots under caution in Texas. pic.twitter.com/Hc6MNkII86

But the thing is, how would you rule consistently?

Well I, for one, would be a lot harsher on intentional crashes and more lenient on last-lap yellow-line violations. You, dear reader, might take the old “have at it, boys” approach. Who’s to say which of us is right? And then, once we’ve spent a few months issuing penalties according to our personal directives, what happens if the fanbase wants to see things handled differently? What happens if drivers start using a loophole, like claiming that spinning someone under caution doesn’t count as wrecking?

Then the rulings change, OK. But now that’s inconsistent! The very thing we set out to avoid!

Now, I’m not a sports guy. I’m such a racing freak that once the F1 season ends on Nov. 20, I’m going to retreat into the world of Forza Horizon until the Rolex 24 brings me out of hibernation. But even I know that a little bit of bickering about refereeing is a critical part of the sports-fan experience. Why should NASCAR be any different?

And again, comparing it to F1, where the teams openly lobby the sanctioning body about penalizing other teams and negotiate the terms of their own penalties, NASCAR comes off looking pretty damn good.

Instead of focusing on consistency, NASCAR’s emphasis when it comes to penalties in 2023 has to be with an eye toward improving driving standards across all three series. With safety concerns still hanging over the Gen 7 car, (and Hocevar’s broken leg in St. Louis reminding us that there’s risk even in the old-style racecars) this off season I’m not asking NASCAR Santa for more consistent penalties, but more effective ones.

Blah, blah, blah. Why does this issue always come up when only certain drivers win the CUP? Logano if memory serves one year a long time ago the “Points Leader” but lost by 3 (I believe, don’t beat me up) due solely to the old fossil Morgan Shepard at Loudon. Many moons ago…..

Come on kb, a lot of us bitch about the format the entire season every season no matter who wins because it’s so stupid.

I KNOW. I AGREE! I am not bitching about this format it was the one prior. Gotta brush up on my specifics, but I do have them somewhere stored many moons ago in my brain, because it made me nuts at the time.

This guy is all over social media with the “chart” as if he hit on something “new”. LOL. Usually, a fan boy saying his guy was “robbed”. This current champ was “robbed” YEARS AGO because of Loudon by 3 points. And if memory serves, he would have been champ the following year if the “old” format was in place, not the new win you’re in. Again, if memory serves. The point I was trying to make. Have a nice off season. Hopefully next season will be worthy of our time.

I’m totally fine with ignoring who NASCAR calls its “champion” when the format they use is absurd, easily manipulated, reliant on chaos for entertainment value, and disregarded on occasion via “playoff waivers” or whatever. I used to easily remember who won the championship each season because it was a season long battle and the contenders were clear. Now it changes minute to minute every race. I think it matters less who NASCAR crowns and much more who the fans view as the greatest drivers. The old Winston Cup format still aligns pretty well with those views, so I’m fine using it to differentiate between “official champion” and “true champion.”

The fact that there is comparison between the two POINT systems should tell everyone how ludicrous the changes have been.

There’s no point in comparing different points formats because drivers will race differently under each system.
Remember in 2006 when Tony Stewart won 4 races on fuel mileage because he wasn’t in the Chase. He wouldn’t have done that during the regular season.