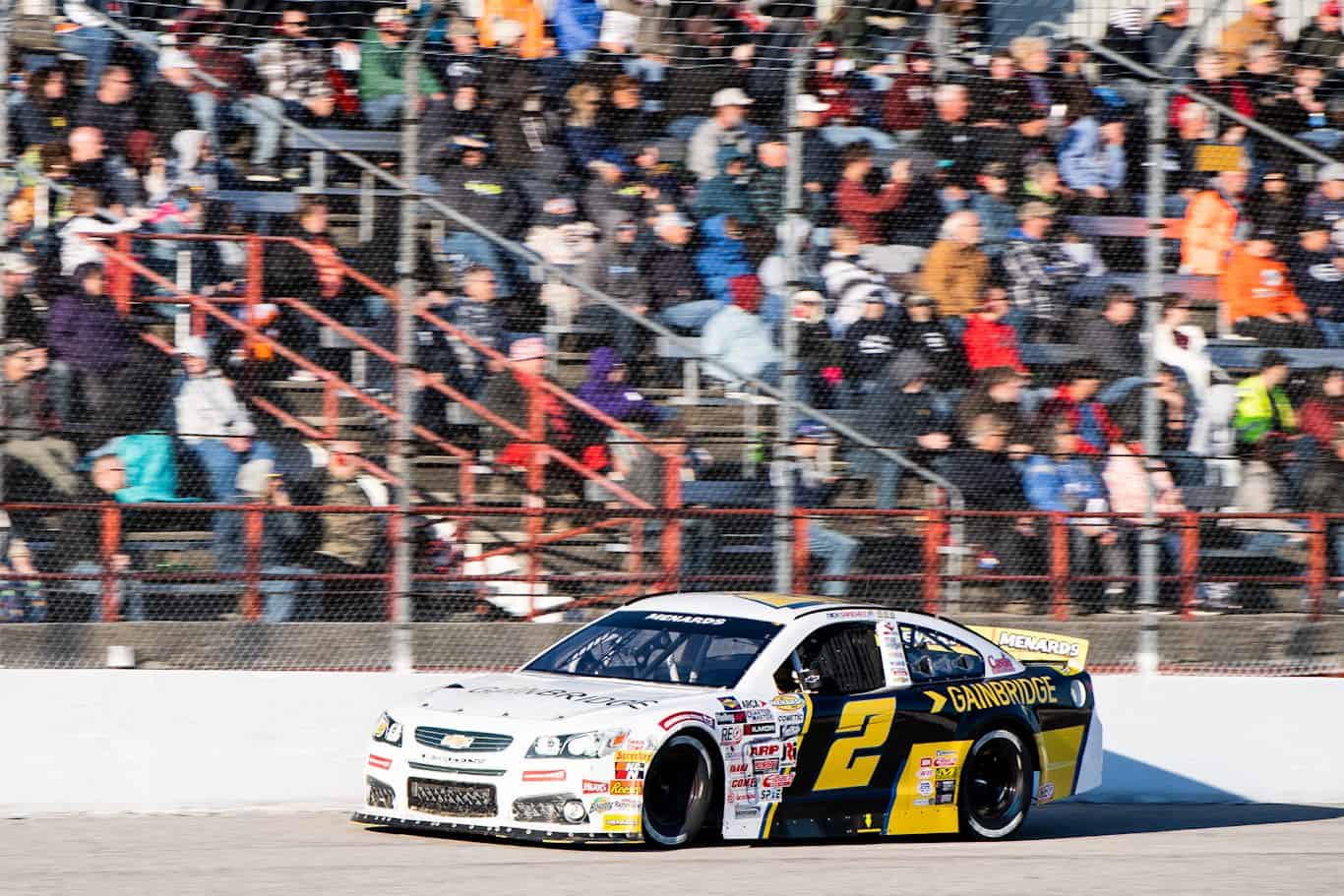 Nick Sanchez, driver of the #2 Gainbridge-Max Siegel Inc Chevrolet, races during the Shore Lunch 200 for the ARCA Menards Series at Toledo Speedway in Toledo, Ohio on October 8, 2022. (Luke Hales/ARCA Racing)

All three ARCA series crowned their own champion, each driving for a different manufacturer. In the main ARCA Menards Series, Nick Sanchez piloted his No. 2 Rev Racing Chevrolet to the championship at Toledo Speedway. In the ARCA Menards Series East, driving the No. 18 Kyle Busch Motorsports Toyota, Sammy Smith captured five wins en route to winning back-to-back championships. Jake Drew drove his No. 6 Sunrise Racing Ford to victory lane four times as he claimed his first career West title.

With the ARCA seasons complete, eyes turn to 2023. To highlight the 2022 season and look forward to 2023, Frontstretch ARCA editor Mark Kristl spoke to ARCA Communications Director Charlie Krall about some of the storylines, top-performing drivers, and what lies ahead for the series next year.

Mark Kristl, Frontstretch: What grade would you give the 2022 ARCA season, especially the main series?

Charlie Krall: I am obviously very biased, so I would give us a high grade based on several different factors. I think our car count was up dramatically over the course of 2022. The competition on the racetrack was good. We had a couple of good competitive races, we had young hotshot drivers who have made their names [known], which is exactly what this platform is supposed to do. We checked all the boxes we needed to check and while I do not want to get pinned down to an exact letter grade, I give us very high marks for 2022.

Going into our final race and having a legit chance that there could be a change in the points leader, then Sanchez had some problems in practice and he did not make it on the racetrack in his No. 2, then Daniel Dye had his issues in the race, those are the types of stories that we just hope for every year before the season even starts. It makes for a lot of work to keep track of who’s running where in those final few races of the season and make sure our TV partners are updated with correct as they run point standings. But it’s a lot of fun and we’re here to create memories and drama for race fans.

Kristl: Who was a breakout star?

Krall: We had a few breakout stars this season. Our champion Sanchez had a terrific year. He’s not one who wants the spotlight pointed at him. He’s a very quiet, introverted guy, but he did all his talking on the racetrack. He had a great year, was very consistent, took advantage of his time in this platform and learned what he needed to learn and came away with a championship.

You cannot overlook Smith. In 25 starts in the ARCA platform, including combination races, and he had 10 wins in 2022. That’s amazing! He is a two-time East series champion, he was fourth overall in the ARCA points despite missing four races and he led his team to the owners’ championship. That’s a spectacular season.

Out west, Jake Drew absolutely has been a breakout star the past couple of seasons and he deserves to have some spotlight shown on him as well.

Kristl: Who surprised you as an underachiever?

Krall: It surprised me that Dye did not win a race. That was the only thing missing from his accomplishments this season. He had a chance at a couple of them. At Talladega Superspeedway, he was leading when he was involved on the last caution flag so he did not win there. Of course, at Berlin Raceway, he dominated and should have ended up in victory lane there too.

Dye’s incredibly talented and a youngster so he created some drama of his own off the racetrack. He certainly learned some valuable lessons about adulthood.

Kristl: ARCA had three odd end-of-race procedures, at Talladega, Pocono Raceway and the Illinois State Fairgrounds. Has ARCA learned anything about those for 2023?

Krall: At the Springfield Mile, we were in the process of saying five laps to go when that accident happened. We never are going to say, “Hey, the race is over,” without giving the teams or fans a heads-up. With there being that time crunch at Springfield, which there is every year, when that accident happened, there was no chance that the race was going to get restarted with how long it would take to clean it up. So, the race, unfortunately, ended right then and there.

Pocono was [due to] darkness and again, we gave the teams a heads-up where we said, “Hey we have 10 laps to go or until the next caution flag.” We had a half-hour red flag in that race and we ran out of daylight. What can you do? There are no lights there and we cannot race in the dark.

Of course, the Talladega situation again had another long red-flag period. We were the opening of a two-race day for the racetrack. Our race sadly was the preliminary race and the main act was yet to come so if something was going to be off schedule, it was going to be us.

We never want to have a race end early, be it by rain, a circumstance on the racetrack, darkness, etc. In those three circumstances, it did not work to do that [end it at its scheduled distance].

As a series, we will race whenever the racetrack and our TV partners say they want us to race.

See also
What We Know About The 2023 ARCA Schedule

Kristl: Michigan International Speedway will host ARCA on a Friday in 2023, a change from 2022. Is that a response to hopefully prevent the race from being cut short?

Krall: That’s a packed race weekend where there’s Xfinity, Cup, and us so it is a very busy track schedule and while I know they would have loved to save some money on not opening the gates on Friday, there just was not enough time or daylight to have three series on the racetrack and have two of them practice, qualify and race on the same day. We are very flexible and we want to be the series that is easy to work with. The Friday will be a little less hectic of a day for our teams and it should, in theory, guarantee they will get all the allotted track time.

Kristl: At Mid-Ohio Sports Car Course, Rev Racing drivers were penalized for pitting for tires outside of the break. Why not change the rule to allow teams to pit for tires whenever they want, be it during the race break or another time as long as drivers pit once before 10 laps to go?

Krall: The reason we do the race break procedure that way is our teams have asked us to save them from themselves. If we don’t help them, teams will spend thousands of dollars traveling pit crew members to come to the races for 30 seconds worth of work. So, what we did, to help them is we came up with this break procedure where the only time to change tires is under the break. It eliminates the need to have a specialized pit crew flown in, and it saves that cost, but the only way to make that work is if that is the only time teams can change tires without a penalty. If we made your proposed change, why have the break?

What happened at Mid-Ohio, and we told the teams the procedure ahead of time, is at the break, teams can switch tires, including rain tires. After the break, you can go from rain tires to slicks or vice versa, based on racetrack conditions. Sadly, Rev violated that and it got penalized. That’s a shame because their drivers were in a position to have a pretty good day.

Kristl: ARCA introduced the Performance Seed Dirt Double in 2022 to go along with the Sioux Chief Showdown, General Tire Speedway Challenge and CGS Imaging Four Crown Championship, all extra money bonuses via certain criteria within the main ARCA season. Are there plans to add any more bonuses and will the Dirt Double return in 2023?

Krall: We actually will be simplifying some of those going forward. I would love for the Dirt Double to come back. It will be sponsor-dependent. It generated a lot of attention and we did get a couple of takers who would not have been there otherwise if not for that bonus. We will make a run at bringing that back next year but we will have to wait and see how that plays out.

Regarding any further race procedure changes such as whether to implement the NASCAR overtime policy on races, Krall said he doesn’t forecast any. “While we are owned by NASCAR, we are operated by ARCA and they [NASCAR] have allowed us to be a standalone company.”

Krall: The Chevrolet Camaro will probably be approved, hopefully sometime in 2023 as they have started the approval process for the Camaro body. Toyota still runs the Camry in Cup so it is up to them on how they want to run their branding in this platform.