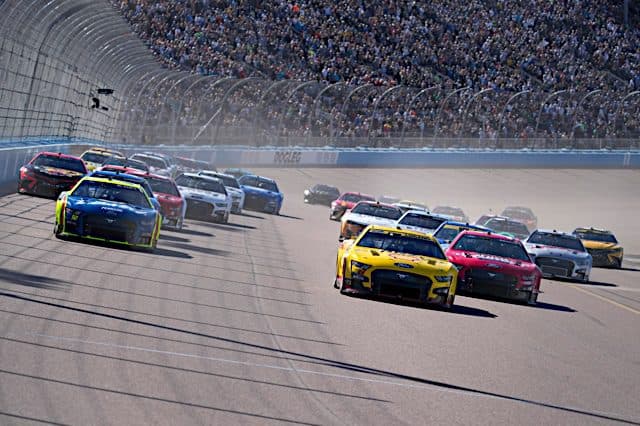 The 2022 NASCAR season came to a close this past Sunday (Nov. 6) outside of Phoenix.

While the Camping World Truck Series race finished with a late restart and an up-for-grabs battle between three drivers, the Xfinity and Cup series crossed the line with a bit of an anticlimactic ending. The Cup Series, which had featured 19 different winners, watched as all the drama that had been built through the opening race at the LA Coliseum turned into a beatdown by a driver claiming his second championship with a top organization.

That Joey Logano, age 32, notched his second title is not a huge surprise. Finding a home at Team Penske after being released from the team that gave him his start, Joe Gibbs Racing, has given a glimpse at the talent Logano was supposed to possess. His four full years at JGR look bad, as his best points finish came in his second Cup season, 2010, when he was 16th. When he parted ways with JGR after 2012, he had scored only two Cup wins and looked more like a never-will-be than a future star.

Now, after 10 years with Penske, Logano has notched 29 more wins and both of his championships. His confidence, cockiness, brashness, talents, and racing acumen have found a nexus, and there is little reason to expect that he will suddenly flounder or go winless. If anything, only now might he be rounding into form.

For Logano, that’s fantastic. For many of us, this past Sunday’s championship race came with a bit of a dud. Logano’s dominance at a track where passing looked limited tells much of the story. However, it should be recognized that every other team had just as much opportunity to put together a race-winning car, but his team just did it better.

The beatdown, more notably, is the more challenging factor. Not that Logano demoralized the other three championship contenders, but rather that no one really seemed able to make a move to do anything that would have changed the outcome. That his closest competition came from his teammate Ryan Blaney says more about how far out front Penske was than anything about the other drivers.

That is the challenge here.

It is impossible to script late-race heroics, like when the field seemed to gift Jimmie Johnson his seventh title by leaving him a lane to drive through on the final restart at Homestead back in, um, 1938, or really 2016 (it just seems so long ago at this point).

Watch it again and smirk. It’s not the overtime restart that did it; the win came when Kyle Larson, Kevin Harvick, and Kyle Busch all treated Johnson as though he were a radioactive alien sent to rip out their motors.

The striking thing is that statistically, the past three Championship races at Phoenix look good. Consider these elements the lead changes and number of drivers:

The most recent championship race looks out of place in comparison, and there is a good chance that the switch to the new car has something to do with this anomaly.

Comparatively speaking, the last two title-deciding races at Homestead-Miami Speedway look like this:

When looked at together, lead changes and number of drivers that led seem to equal out and Phoenix does itself well.

Perhaps it is the dominance of one car at a track that makes the difference here. Look at how the numbers stack for the winner of the race as far as laps led:

At Homestead, neither Logano nor Busch reached 50%, while Elliott almost hits the mark (six laps shy), and Logano easily does.

So does NASCAR have a Phoenix problem?

If you talk to some who follow the sport, NASCAR never should have moved the championship from Miami. The venue had turned into a classic title-deciding track with its progressive banking and finishes under the lights. In some ways, it had become iconic.

Phoenix has never reached this elevated status. Some might say that by visiting the track in the spring that some of the luster is removed. That idea is in play as Miami stands as a track that sees NASCAR action just once a year, and the novelty of the visit is part of the allure. Perhaps Phoenix as being a special place is part of the question, even if the track is outside of Phoenix. Then again, Homestead-Miami Speedway is really in Homestead, over 20 miles from the latter part of the name. Both cities regularly host Super Bowls, so they know how to host a party.

The thing that comes to mind when watching clips from Homestead versus Phoenix is that it all comes down to speed. In that regard, Phoenix just looks a little slow. Being a flat track, corner speed is down, which may make driving it more difficult and a better decider of talent and car, but it also does not give the visceral image of speed. For a sport built upon notions of going fast (thanks, Ricky Bobby), the Phoenix track evokes none of this feeling or imagery.

These thoughts are not a push to put Homestead back as the championship site (though certainly not a bad idea) but rather a recognition of the reason for why people may feel, well, flat, after sitting through 312 laps of racing in the high desert. A change would be lovely but may not be in the offing any time soon, so for now, fingers crossed that the engineers and crew chiefs figure out a way to make this new car more competitive on those tracks with less banking.

I preferred the Homestead track for the final race. I still think that is the best of the 1.5 mile tracks.
The new car has neutered the short track races, so it’s no surprise that no one could pass at Phoenix.
And I should remind you that Johnson was out to lunch and almost lap down at one point in the 2016 championship race. Carl Edwards was driving comfortably to the win until NASCAR threw a BS caution, bunched them up for a late restart. On the restart the other three contenders sustained damage as they jockeyed for position. That left Johnson as the last contender with an undamaged vehicle. He won by default. That championship was, without a doubt, the most questionable of all the championships run under this format.

I’ve always felt that if Edwards had stayed in his lane and not moved down he would have come out of turn two in the lead and won the title. But Brian would have seen more “debris” on the track to give Johnson another shot at one of his seven gift titles.

“It is impossible to script late-race heroics”

Too bad Brian The Brilliant never realized that and his sycophants are keeping his vision going.

Old Phoenix fits into the history of NASCAR and tradition, and the bulk of the fan base like Jed Clampett driving a Covette. NASCAR owns Phoenix and needed to get a crowd out there. The sport began in Florida and Homestead is an excellent location. Miami is a vibrant city with a very diverse culture. You can reach all ethnic groups, the city understands tourism, fans can visit Disney World before or after, has the beach, can catch a cruise. But, that makes too much sense for the spawn of the disaster who moved the Southern 500 to Fontana.
But you cannot take away the work the Penske team did under the watchful eye of Paul Wolf, the excellent strategy, the Doug Yates power. Blaney showed it was preparation and Joey is a great driver, haters need to understand that. People didn’t like Jimmie Johnson either. Joey slayed the field.
Now, if adults with some real education were running the sport, trial is over, and move it back to Homestead.

Has there ever been a good NASCAR race at Phoenix, NOPE! It was designed as an INDY CAR track before NASCAR’s band of idiots changed and ruined it for open wheel but it has sucked forever as a stock car track. NASCAR is run by idiots!!!