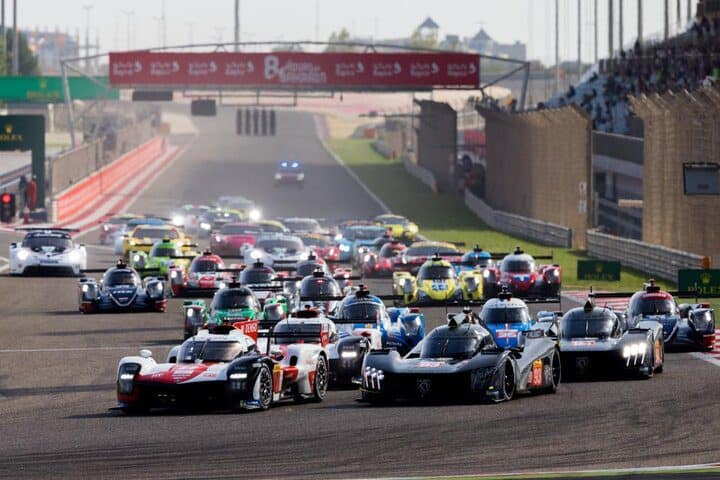 Toyota GAZOO Racing’s No. 7 of Mike Conway, Kamui Kobayashi and Jose Maria Lopez took an easy win Saturday (Nov. 12) in the BAPCO 8 Hours of Bahrain, the final race of the FIA World Endurance Championship season. It is the team’s second win of the year and fourth for Toyota as a whole.

Entering the race, the championship was a dead heat between Toyota GAZOO Racing’s No. 8 of Sebastien Buemi, Brendon Hartley and Ryo Hirakawa and the grandfathered LMP1 Signatech Alpine of Nicolas Lapierre, Andre Negrao and Matthieu Vaxiviere. However, the Signatech squad struggled with pace for the entire weekend, leaving the championship battle mostly uncompetitive.

The Peugeots were once again very quick. The No. 93 Peugeot 9X8 with Paul di Resta at the wheel was very strong early on, hassling Buemi for the overall lead before dropping back. Unfortunately, Peugeot’s chances at a great finish ended when the transmission turned traitor. The No. 93 started losing gears and fell way down the order. Eventually, the car was retired from the race.

The No. 94 Peugeot was plagued by electrical issues. The car stalled multiple times on Loic Duval, forcing him to pull off and completely reset the car.

The effective pass for the win occurred on lap 96 early in the fourth hour. Here, Conway was able to get past Hartley shortly after a round of stops. Once out front, Conway pulled away from his teammate, to the point that the only time that the No. 7 was out of the lead for the rest of the race was due to pit stop sequences en route to the win.

The No. 7 Toyota won by 45.471 seconds over Buemi, Hartley and Hirakawa. The Signatech Alpine ended up third, two laps down at the finish. The No. 94 Peugeot of Duval, Gustavo Menezes and Nico Mueller ended up six laps down in fourth.

The second-place finish for Buemi, Hartley and Hirakawa was enough for them to win the title by five points over Signatech Alpine. The eight-hour race length means that the event was worth 150% of normal points. Normally, finishing second to your rival’s third-place finish would have been a three-point difference. An additional point was added on by virtue of Hartley winning the overall pole.

See also
Beyond the Cockpit: Eric Foss on Developing With Mazda & Why Murillo Racing Is the Place for Him

In LMP2, RealTeam by WRT’s Ferdinand Habsburg started on pole, but lost his advantage on the first lap to United Autosports’ Filipe Albuquerque. Early on, the two United Autosports entries dominated. However, Team WRT’s No. 31, with Rene Rast at the wheel, slowly rose into contention.

On lap 72, halfway through the third hour, Rast took class lead away from Phil Hanson. From there, Rast, Sean Galael and Robin Frijns were able to pull away to take their third win of the year and second in a row.

Team WRT’s margin of victory was 49.264 seconds over United Autosports’ No. 23 of Oliver Jarvis, Alex Lynn and Josh Pierson. JOTA Sport’s No. 38 for Antonio Felix da Costa, Roberto Gonzalez and Will Stevens was a lap down in third, followed by Prema’s Lorenzo Colombo, Louis Deletraz and Robert Kubica. RealTeam by WRT’s Habsburg, Rui Andrade and Norman Nato were fifth.

Da Costa, Gonzalez and Stevens only had to finish sixth in order to win the title. A third-place finish was enough to claim the championship by 21 points over Team WRT, with United Autosports’ Jarvis and Pierson in third.

In GTE-Pro, the championship battle was between the No. 51 AF Corse Ferrari of James Calado and Alessandro Pier Guidi and the No. 92 Porsche of Michael Christensen and Kevin Estre. Calado and Pier Guidi entered Bahrain with an 11-point lead and ran well early on. However, the No. 51 Ferrari lost fourth gear in the sixth hour, a very important intermediate gear.

Sure enough, Fuoco and Molina were able to dispatch of Corvette Racing’s Nick Tandy in the sixth hour and slowly progress up to the class lead. They were able to hold on to take the win by 50.826 seconds over Corvette Racing’s Tandy and Tommy Milner. Porsche’s Christensen and Estre were third, while the No. 91 Porsche of Gianmaria Bruni and Richard Lietz ended up fourth after a last-minute pit stop for fuel.

Pier Guidi was able to nurse the No. 51 Ferrari home four laps down to his teammates, but that was enough to give himself and Calado the GTE-Pro championship by three points over Christensen and Estre.

GTE-Am saw the Iron Dames Ferrari shared by Sarah Bovy, Rahel Frey and Michelle Gatting dominate much of the race. However, the team got behind the drive-time requirements late in the race. That necessitated a driver change to Gatting on their final stop.

The slower final stop allowed Team Project 1’s Mikkel Pedersen to take the class lead in the No. 46 Porsche 911 RSR-19. Once out front, Pedersen was able to pull away to give himself and teammates Matteo Cairoli and Nicolas Leutwiler their first win of the year.

The race ended up being a one-two finish for Team Project 1 as Ben Barnicoat was able to get past Gatting for second with a little more than 10 minutes to go, then drove away to claim the spot for himself, Gunnar Jeannette and WEC debutant PJ Hyett, 15.665 seconds behind their teammates. The Iron Dames ended up third, then TF Sport’s Henrique Chaves, Ben Keating and Marco Sorensen. Northwest AMR’s Paul Dalla Lana, David Pittard and Nicki Thiim were fifth.

The fourth-place finish for TF Sport was good enough for Chaves, Keating and Sorensen to win the GTE-Am title in their Aston Martin by 23 points over Northwest AMR. Of note, this is the same car that Chaves rolled at Monza off of a sausage curb at the Variante Della’Roggia.

It’s easy to win when the cars illegal.