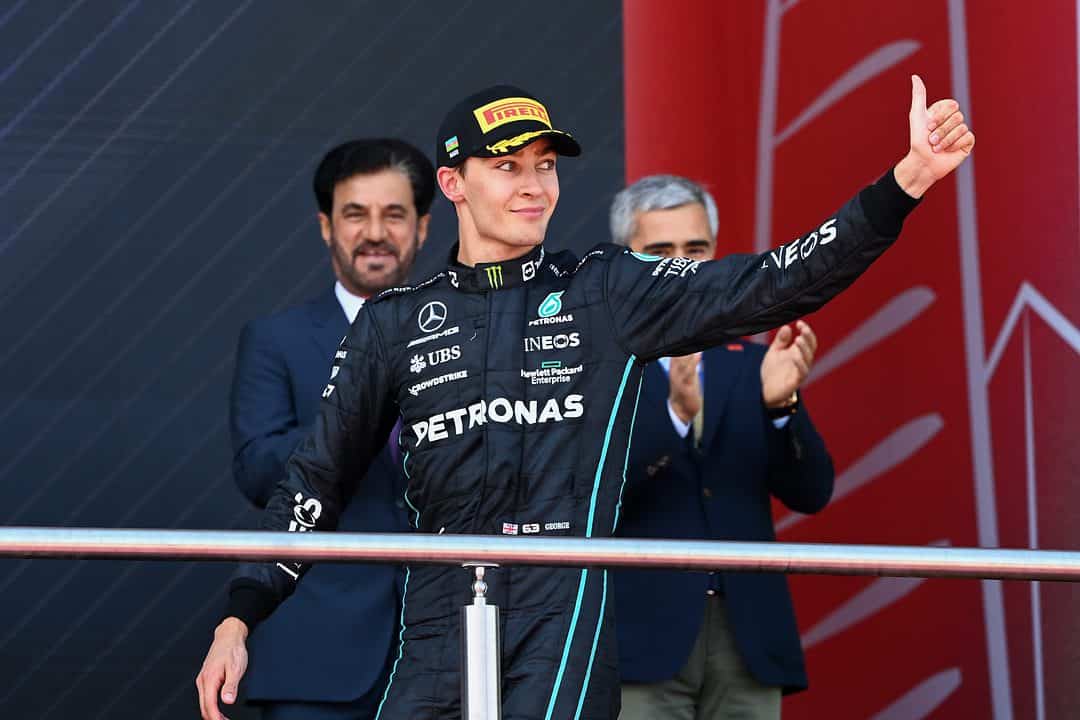 “What an amazing feeling,” Russell told Felipe Massa after the race.

“This race was a really tough race; I felt in control. Lewis was super fast and then when I saw the safety car I thought ‘Oh, Jesus. This is going to be a really difficult end’ and he put me under so much pressure. But so happy to go away with the victory.

Hamilton indeed proved to be Russell’s only serious competition on the day, and gave merciless pursuit to his teammate over the race’s final 12 laps. Hamilton was unable to come within one second of Russell to utilize DRS and challenge for the win, the final margin of victory remained just over a second.

The Ferrari pair of Carlos Sainz and Charles Leclerc followed Russell and Hamilton to the flag for a third and fourth place finish, respectively. Fernando Alonso managed a relieving fifth after starting from 18th on the grid owing to a penalty accrued after contact with his teammate Esteban Ocon during Saturday’s Sprint Race.

Following Alonso were the Red Bull pair of Max Verstappen and Sergio Perez who both struggled to match the pace of Mercedes and Ferrari throughout the weekend.

The race opened with chaos as Friday polesitter Kevin Magnussen and Daniel Ricciardo made contact in turn 8, eliminating both drivers from the race before the first lap had been completed.

Ricciardo and Magnussen collide in the middle sector 😱

They're both out of the car and appear to be OK, but the same can't be said for their cars#BrazilGP #F1 pic.twitter.com/6VKUHlmnLn

Racing resumed following a six-lap safety car period, where Verstappen and Hamilton immediately made contact in turn 2, earning Verstappen a five-second time penalty to be served during his next pit stop. Verstappen suffered front wing damage while Hamilton continued on without issue.

Hamilton drops to P8, while Verstappen pits for a new wing#BrazilGP #F1 pic.twitter.com/NgJvnjMMD1

Five corners later, Lando Norris and Leclerc made contact in turn 7 which sent Leclerc firmly into the tire barriers, though the Monegasque was able to continue on and later rally to challenge his teammate for a podium finish. Norris acquired a five-second penalty for the incident just as Verstappen had.

Norris later triggered the final safety car of the race on lap 52 when his McLaren lost power and came to a stop in sector 2, requiring track marshals to move the car to a safe location.

Wills clashed within the Red Bull team as the laps wound down when Verstappen vehemently defied team orders and held sixth place to the line, perhaps fatally undermining Perez’s challenge for second place in the championship in the process.

The final race of the F1 season will take place on Sunday, Nov. 20, at the Yas Marina Circuit in Abu Dhabi. Coverage will begin at 8 a.m ET on ESPN.