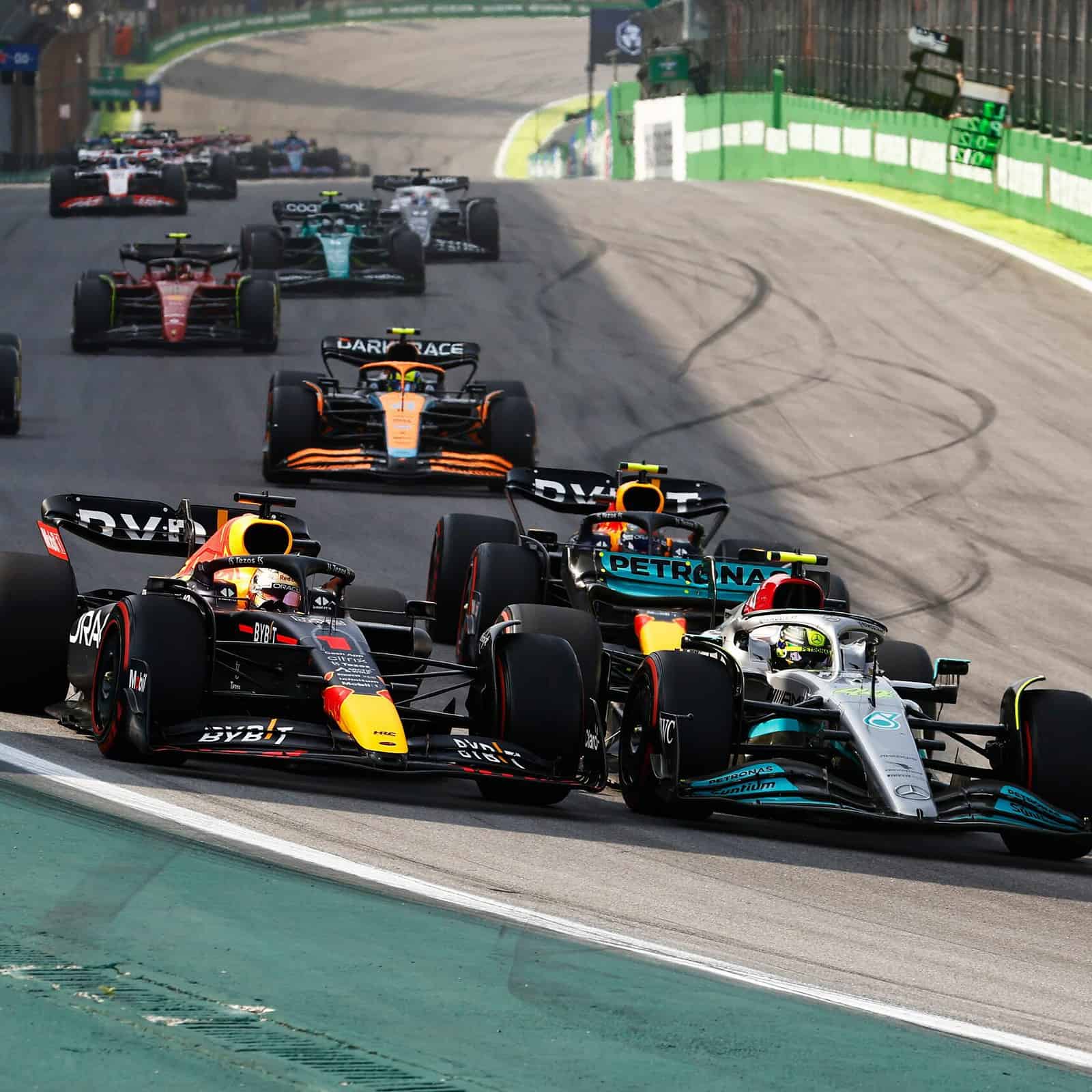 Yes, it is Sunday, Nov. 20, 2022. But on lap seven of the Sao Paulo Grand Prix at Autodromo José Carlos Pace, you’d be forgiven for thinking you were re-living 2021.

As sprint winner George Russell led the field to the first of two safety car restarts, third-place Max Verstappen got the jump on second-place Lewis Hamilton into the first turn.

Verstappen pulled his Red Bull to the outside of the No. 44 in the first of the Senna esses, edging ahead by a hair through the center of the turn. As the track twisted right again, Hamilton swept back around the outside, the Mercedes pulling ahead by the slightest of margins.

Both aimed for the apex of turn two. Neither yielded. For the second time in as many years, Verstappen and Hamilton made controversial contact in the first sector at Interlagos.

The view from onboard, as Max and Lewis come to blows 💥#BrazilGP #F1 pic.twitter.com/2TRaFJFzO8

Both drivers tumbled down the order, but by turn four it became clear. The Mercedes was largely unharmed; the Red Bull’s front wing was shattered. As Hamilton began his more-or-less straightforward recovery drive to second place, car No. 1 dropped to the rear of the field.

But Verstappen’s day wasn’t nearly over. A blistering 10-second nose change from the Red Bull pit crew sent the World Champion back on track way behind the rest of the pack, with only a similarly crash-damaged Charles Leclerc for company. In clear air, the RB18 soon caught the pack and began passing cars.

To add insult to injury, on lap 17 the Dutchman was given a five-second penalty after F1 stewards determined he was responsible for the earlier collision.

The 34-time race winner wasn’t happy with the decision, asking the team over radio, “where did they expect me to go?”

Then, Verstappen lost additional time on his second pit stop at lap 24, a 10-second total including the penalty dropping him back behind the midfielders he’d worked so hard to pass.

No matter. The season’s dominant driver came back through the pack again, moving into the points on lap 41 with a DRS-assisted move on Mick Schumacher.

Leclerc is up to P9, with Verstappen now in P10, as both recover through the field 👀#BrazilGP #F1 pic.twitter.com/YSc7qYr8K9

But once again, the cruel hand of fate dealt Verstappen a low card. Shortly after receiving service on pit road for the third time, the second safety car of the afternoon froze the field, stranding him once again on the margins of the points.

But in a recovery Chumbawumba can be proud of, the two-time World Champion forced his way through the bunched-up pack one final time.

On lap 62 he dispatched four-time champion Sebastian Vettel into turn one. A lap later he put one on both Esteban Ocon and Valtteri Bottas to move into the seventh position.

On lap 67, as his Red Bull teammate Sergio Perez faltered on aging mediums, the Mexican pilot waved him through to sixth.

In the end, Verstappen couldn’t catch either Leclerc or Fernando Alonso, finishing the Sao Paolo Grand Prix in sixth place, despite the urging of his engineers to let Perez back through on the final straight.

“I told you already last time,” Verstappen fired back, ending a weekend chock full of intra-team conflict the way it started. “You guys, don’t ask that again … I gave my reasons and I stand by it.”

Perez, in the midst of a battle for second in the championship with Leclerc, was equally unhappy with Verstappen’s decision, telling his engineer “it shows who he [Verstappen] really is.”

Perez over the team radio after Verstappen didn't let him past 😳 pic.twitter.com/piL9ZI54HJ

With Perez and Leclerc even on points, the championship runner-up will be decided as Verstappen fights to extend his single-season wins record next time out, as the 2022 F1 season concludes at the Abu Dhabi Grand Prix, Sunday Nov. 20 at the Yas Marina Circuit. Coverage begins at 8 a.m. ET on ESPN

I’m a huge MAX fan but he should have given his place to Sergio today. Take one for your team mate and for the team. Especially when it changes nothing for your year. Winning is #1.
Humility is #2.