“This place is super fun, car is super fun,” Cabre said post-race. “Green-flag pit stops made it interesting, to say the least.”

This win locks Cabre into the playoffs later this season. It is also his first-career MNR win.

New Track to Most

While Twin Ring Motegi is one of the most well known tracks outside of the United States, it was brand new to some Monday. Certain drivers had never made a lap at the track on the sim, creating a challenge throughout the race.

It has been quite a few seasons since the league visited Motegi, so there were still some drivers in the field who have experience at the track. However, that race was run with an IndyCar model, not a stock car.

The ARCA Menards Series cars on iRacing are not exactly similar to what one sees in real life. These cars are modeled more like what the Gen 4 NASCAR Cup Series car were, which were the old ARCA cars before the series switched to the Gen 6 a few years back. They still race very well, especially at shorter, flatter tracks like Motegi.

As expected, a very competitive field took to the track all night long. Inexperience for many goes a long way in the league, especially when many are learning the track and car combination at the same time. Some mastered it quicker than others, and that showed all night long.

James Bickford started on pole with a time of 36.521 seconds, a bit off Corey Heim, who was fastest in practice.

Two early incidents within the first 10 laps led to Cabre leading the opening stint of the race, proving he would be one of the cars to beat all race long. Polesitter Bickford fell outside the top 10 early on with some handling struggles.

The first round of pit stops took place under caution on lap 30, which shuffled the field. Joey Padgett and Collin Fern led the field to the restart on lap 33. Fern maintained his track position until the next caution eight laps later, while defending champion Presley Sorah took the race lead during that short run.

Cabre retook the lead just after halfway from Sorah and stretched out to a solid lead. Passing proved to be very difficult all night long, but Cabre made it look easy after falling back to about sixth after the first round of pit stops.

The final round of green flag stops began with about 30 laps, fuel strategy coming into play near the end.

Fern attempted to win on fuel mileage, but Cabre got by on fresher tires with six laps to go — and never looked back.

Full results are shown below. Frontstretch’s own Michael Massie had a much better race this week, finishing 28th, on the lead lap. 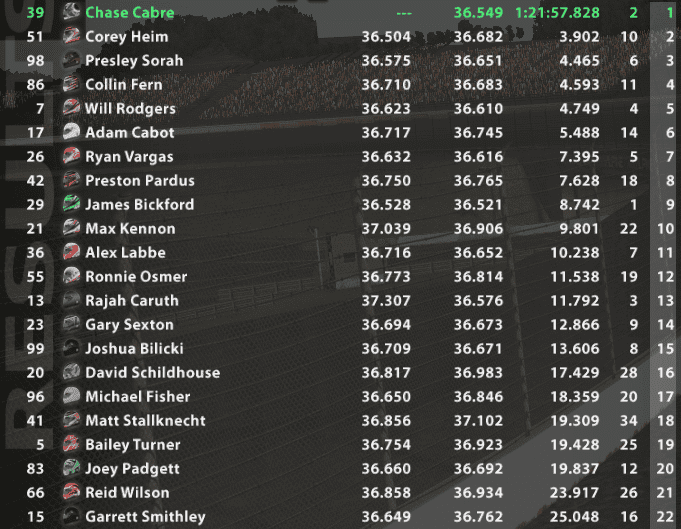 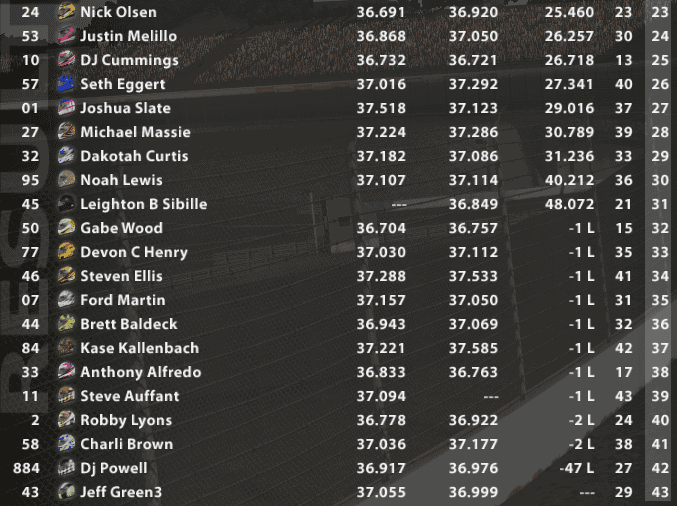 Tonight’s race was mostly a story of track position. It was extremely hard to pass, which is typical of any flat track in the sport. With the ARCA cars not having much power, it was difficult to get any sort of run off the corner, meaning all passing had to be done primarily on entry.

Viewers of the series have seen it before, but never count out Fern when it comes to fuel mileage races. He won Atlanta Motor Speedway last season to clinch a spot in the Championship 4 the same way, by stretching his fuel further than anyone.

But look out for Cabre. He has experience on iRacing, and he has plenty of talent when it comes to the sim side of things. He will be strong all season, regardless of where this league races. Tonight was only the start of what should be a strong season.

The next race of the season will take place next Monday night (Nov. 21) at Daytona International Speedway with the Mazda MX-5 cars. Coverage begins at 8 p.m. ET on Twitch.tv/podiumesports.

Head over to our YouTube channel for the post-race show between Michael Massie and myself as we recap all the action.