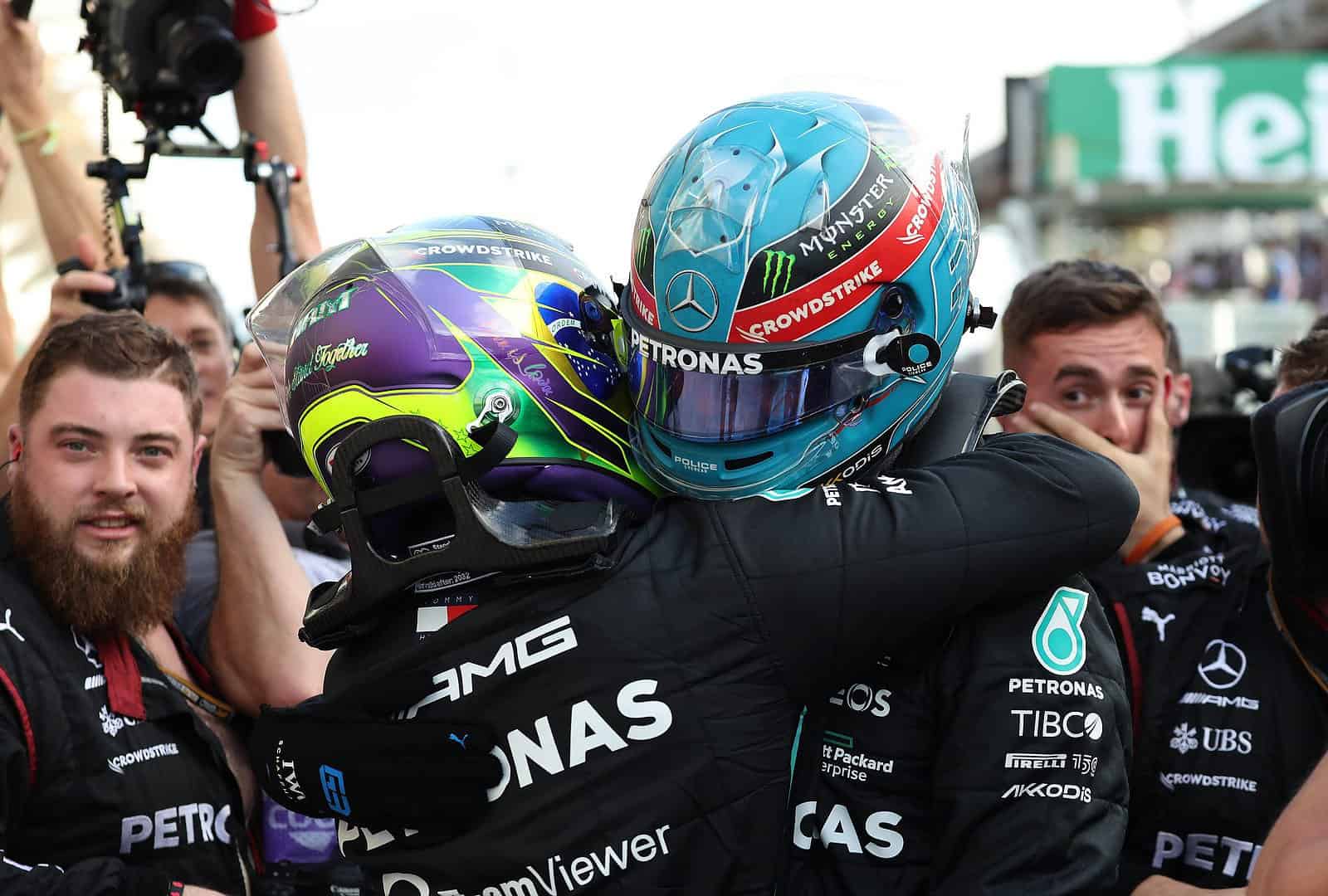 George Russell won the Sao Paulo Grand Prix on Sunday (Nov 13), his first win in Formula 1 and the first win for Mercedes in 2022.  Russell earned the win during the sprint race on Saturday, giving him the pole for Sunday’s GP, and made good, opening with a clean start and rolling from there.  He managed the race like a veteran and crossed the line with his teammate Lewis Hamilton in second.

Carlos Sainz led a Ferrari three–four, as both drivers faced challenges during the GP to assist in trying to hold off Mercedes in the constructor’s championship.  Sainz had brake issues early in the race, while Charles Leclerc recovered early from being tagged and spun to take fourth.  Ferrari lead Mercedes by 19 points (224–205) heading into the season finale in Abu Dhabi.

Fernando Alonso put together a stellar drive after starting 18th, owing to a collision with his teammate Esteban Ocon in the sprint race, and recovered to finish fifth.

Max Verstappen earned sixth after another episode in his ongoing drama titled: Lewis & Max, Max & Lewis.  Fans had thought the series canceled this year as Hamilton has been unable to keep up with Verstappen, but with Mercedes improvements, the two are now able to resume filming the critically lauded production.  Will Abu Dhabi provide another climatic ending for the two drivers??  Stay tuned.

Valtteri Bottas scored ninth; his second consecutive points finish after 10 races without such a finish (a string that includes four DNFs).  Lance Stroll earned the final point of the race, putting together a decent effort after his disappointing effort in Mexico two weeks ago.

The first lap began with a clean getaway by Mercedes teammates George Russell and Lewis Hamilton.  Things looked to be drawing into form as drivers sorted their positions until turn nine when Daniel Ricciardo first tapped and then punted “pole sitter” Kevin Magnussen.  (Magnussen had stunned on Friday by earning pole but started the GP in eighth after finishing in that spot in the sprint race on Saturday.)

What a weekend–to go from earning his first pole, being the first Danish driver to earn pole, and grabbing Haas F1’s first pole, Magnussen found himself standing against the barriers waiting to get back to the paddock.  He wound up waiting until the finish before being able to. Racing has incredible highs and lows.

Friday's hero watches on from the infield 💔#BrazilGP #F1 pic.twitter.com/pQJFJUCISn

The safety car came in on lap six, setting up a clash between Max Verstappen and Lewis Hamilton on the restart.  Naturally, the two drivers did not disappoint in putting together another incident in what has become a history littered with them.

Of course, any time these two are around each other, red mist seems to fill their brains and they become some obstinately confused about what they are doing that reason, skill, and talent are forgotten in thinly veiled rage.  Twitter and social media will react accordingly.

Half of #F1 twitter when Lewis Hamilton and Max Verstappen interact in any way shape or form pic.twitter.com/wCtQ0ubzxd

Verstappen’s post-race interview included this wonderful concession on sportsmanship, acknowledging that he, well, pretty much crashed into Hamilton on purpose and he was happy to cost Hamilton the race win.

Did he just openly admit to ruining Lewis’ race on purpose? “It cost him the race win and me 5 seconds”

This guy has no sportsmanship at all.
pic.twitter.com/fwHWsfAtMB

For having claimed two straight titles, making such an assertion is not only peculiar but speaks of bad form.  Hamilton dropped to eighth while Verstappen came in for a stop and fell to 17th.

Shortly thereafter, Lando Norris and Charles Leclerc decided that he too needed to add to the day’s storylines and got together.

A huge collision for Charles Leclerc… but amazingly, he recovered to fourth! 😱#BrazilGP #F1 pic.twitter.com/rAcCTSxfTZ

Leclerc joined Verstappen in the back after grabbing help from his team in the paddock and returned in good form.  The race then fell into a calmer procession, with teams beginning pit stops in the late teen laps and continuing through the early twenties.  Hamilton had rebounded to third by lap 21, Leclerc up to 15th, and Verstappen into 12th.

The driver who looked to be putting together an incredible drive was Carlos Sainz, who had pitted because a visor tear-off had clogged a brake duct. By lap 26, he recovered to fifth, as Hamilton led the GP, having yet to pit.

With Hamilton pitting, Russell resumed his position in the front with Perez and Sainz trailing.  Hamilton, having pitted 13 laps after Russell, started grabbing fastest laps and was charging from fourth.

By lap 50, Russell led with Sainz in second, and Hamilton charging again in third.  Lando Norris parking his McLaren because of a gearbox issue shuffled the ending of the race, bringing out first a virtual safety car and then a safety car, bringing the field together and making for a suspenseful conclusion.

Russell felt no need to play into the narrative and kept Hamilton behind, enjoying the clean air from an open track in front of him.  With Hamilton crossing the line in second, Mercedes notched its first one-two finish since the Emilia Romagna GP in 2020, November 1, 2020.

The sport needs more winners.  In 2022, 22 different drivers have driven in the 21 races thus far.  After Russell’s win, only five drivers have stood atop the podium.  Verstappen has collected 14 of the wins, Leclerc 3, Perez 2, Russell 1, and Carlos Sainz 1.  To say that the sport is top-heavy is an understatement.  Rather, to say that one team has ruled seems to be more appropriate.  Having Mercedes, itself once the evil empire, score a win is a hopeful realization that a team other than Ferrari might be able to take the fight to Red Bull next year.

Seeing other drivers hoist the big bottle of champagne helps to promote the idea that there actually is a chance for different winners.  Some thought that parity might be part of this year’s story with the introduction of the new car and budget caps implemented, but instead, the richer organizations just got better at managing their advantage, and the top three teams have distanced themselves.  Russell’s win may not come as a wild outlier, but it does offer the semblance of hope that a team can improve.  Think back to the middle of the season and how errant Mercedes looked, and there is reason to think that teams like McLaren, Alpine, and Aston Martin should be able to luck their way into a win.

Top job to Russell for earning his first win, an accomplishment that appears to be the beginning of a career that should be filled with them.

If the Sao Paolo GP needed drama, Max Verstappen was here to provide all of it.  Not content with winning last and this year’s driver titles and helping Red Bull win the constructor’s title in 2022, Verstappen also needed to play the heel for this race.  His tete-a-tete with Hamilton may be one thing but his unwillingness to allow his teammate Sergio Perez to pass him on the final lap so that Perez may have a chance to finish second in the driver’s standings is a whole other level of ass clownery.

On the cool-down lap, after being asked to let Perez go multiple times, Verstappen responded by saying: “I told you already last time, you guys don’t ask that again to me, OK? Are we clear about that? I gave my reasons and I stand by it.”

While F1 is certainly an individual sport in most respects, it is also a team sport.  Giving Perez the spot would have been a decision beneficial in keeping a steady garage and maintaining morale.  Having Perez respond by saying that the move shows who Verstappen really is, provides the type of material that can be divisive and lead to troubling consequences.

Perez over the team radio after Verstappen didn't let him past 😳 pic.twitter.com/piL9ZI54HJ

That ESPNF1 Twitter followed with this message offering a glimpse at how Perez has helped Verstappen previously, offers evidence that teamwork is a vital element in the sport.

A reminder of all the times Perez helped Verstappen last season 👀 pic.twitter.com/8wWDNqRogU

With two races left in his F1 career, Aston Martin failed to do its best to help Sebastian Vettel score a point in his final trip to Brazil.  While many behind him pitted for tires, A-M left Vettel on track with old tires and unable to defend himself from Alonso, Ocon, and teammate Stroll.  The four-time champion deserved better as he reaches the final laps.

Lewis Hamilton fans stuffed the ballot box and gave him the title of driver of the day.  That’s nice.  To think that George Russell should be deprived of the award is baffling.  Any driver earning their first win should be given the title by default.  Even though he started from pole, avoided any trouble, he remained composed during the late restart and drove away for the win.  Russell has proven himself to be every bit the talented driver that Mercedes expected after promoting him from Williams and there is reason in thinking that he will be the face of the organization when Hamilton retires–whenever that may be.

George Russell gave his academy-award-winning speech by saying, “On the in-lap, all of these memories came flooding back, starting off with my Mum and Dad in go Karting, going through and all the support I’ve had from the rest of my family, my girlfriend, my trainer, my manager. The likes of Gwen, who first gave me the opportunity to get on the program with Mercedes, and James Vowles and Toto. I can’t thank everyone enough.”

Max Verstappen offered these words about the GP later, saying We’ve discussed internally as a Team the matter between Checo and myself and have moved on as a Team. If he needs the help and there is a chance to help him in Abu Dhabi, then I will be there, and I will of course support him. We’re fighting for first and second in the Drivers’ Championship, so we’ll work hard to achieve that.”

Carlos Sainz enjoyed his podium finish stating, “We managed to stay focused, picked up the pace again and were fast during the entire race. We reacted to every challenge today and the boys did great pitstops. We brought home the best possible result for the team and we look forward to racing again in Abu Dhabi for the last time this season. Congratulations to George on his maiden win. He’s had a good weekend and he deserves it.”

Note – Russell scored an additional point for setting the fastest lap of the race. Gasly received a five-second time penalty for speeding in the pit lane.

The Max and Sergio thing reminds me of the Ty Gibbs and Brandon Jones incident.