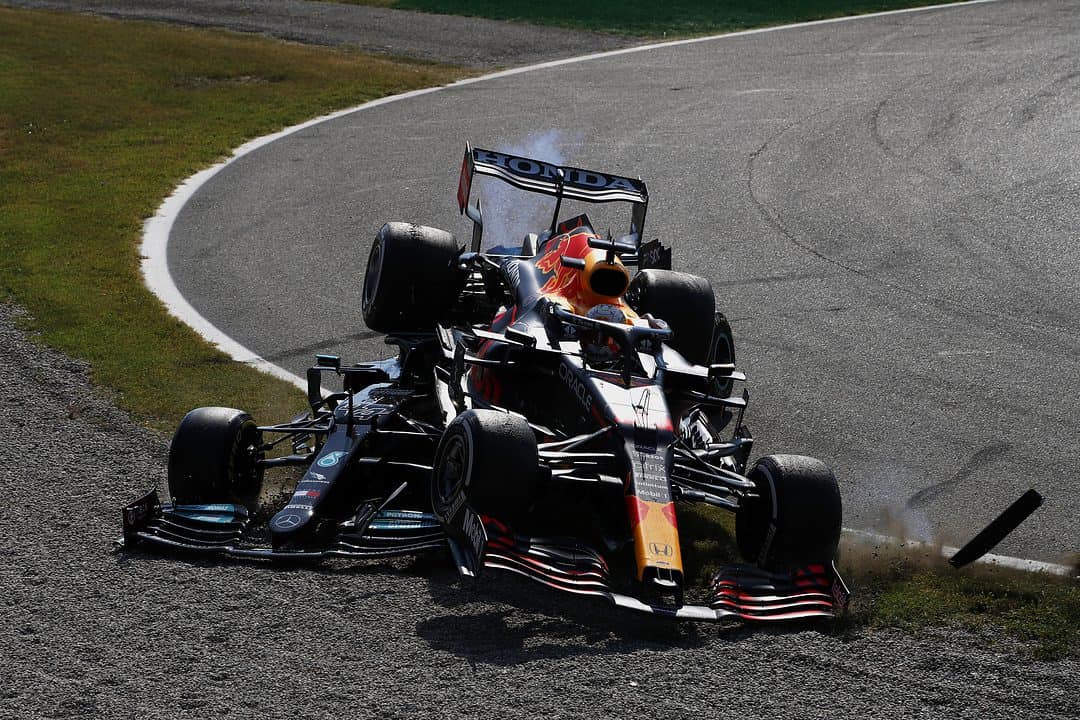 Max Verstappen wound up atop Lewis Hamilton in this crash at the Italian Grand Prix, Monza, 2021 (Photo: LAT Images via Mercedes AMG F1)

This time last year, the Formula 1 community was up in arms about a borderline penalty call from the FIA in response to contact between Max Verstappen and Lewis Hamilton at the Sao Paulo Grand Prix.

Well, the more things change, the more they stay the same. At the 2022 Sao Paulo Grand Prix’s lap 7 safety car restart, Verstappen got the jump on Hamilton entering the first turn, pulling his Red Bull to the outside. Crucially, while Verstappen momentarily pulled ahead, by the time the two entered turn 2, Hamilton was back in front — barely.

So after the two came together, it was Verstappen handed down a five-second penalty by the stewards.

Motorsport.com reported that, in the official FIA verdict, it was noted that “Hamilton could have left a bit more room,” ergo Verstappen was “predominantly” and not “wholly” to blame for the collision. They ultimately reached the decision they did due to the fact Verstappen over-drove turn 1 to gain position on Hamilton, therefore his shallow entry to turn 2 was not “safe and controlled.”

Max Verstappen said he didn't think Lewis Hamilton "had any intention" of leaving him space in their Brazil GP clash 🤺⁠
⁠
What did you think of the incident? Tell us your thoughts in the comments 👇⁠#F1 #Autosport #BrazilGP pic.twitter.com/PuO28VuQ8Y

“To be honest, I went around the outside and I immediately felt [Hamilton] was not going to leave space,” Verstappen told Sky Sports after the race. “I just went for it, he didn’t leave me space, so I knew we were going to get together. It cost him the race win, for me it gave me five seconds.”

After calling the clash “no racing incident” over the radio, Hamilton only followed up post-race with: “You know how it is with Max.”

Well, there are two sides to every story.

Here is the official language from the FIA’s overtaking guidelines, released ahead of the 2022 season to clarify their procedures in assessing penalties such as the raft that affected last season’s title battle in the closing three races:

Interestingly, there is a divergence in the guidelines when it comes to overtakes on the inside versus the outside of a corner:

“When considering what is a ‘significant portion’ for [sic] an overtaking on the inside of a corner […] the stewards will consider if the overtaking car’s front tires are alongside the other car by no later than the apex of the corner.”

“When considering what is a significant portion, for [sic] an overtaking on the outside of a corner […] the stewards will consider if the overtaking car is ahead of the other car from the apex of the corner.” (Emphasis mine).

What’s the significance here? Well, lurking in the fine print: if someone is to your outside, you can legally run them off the road. If they are to the inside, you can legally run them off the road in certain conditions, hence Verstappen performing the mid-race calculus that a risky move would cost Hamilton more than him, and just going for it even if he “knew” a collision was likely. And thus Hamilton holding position and lobbying over the radio for Verstappen to be penalized.

Maybe it’s fitting that Verstappen comes out on the wrong end of this questionable call, since it was another questionable call last year to not penalize the Dutchman on lap 48 of the same Grand Prix for a similar defense on his bitter rival.

To quote a soon-to-be-retired Grand Prix racing legend, “what are we doing here, racing or ping-pong?”

F1’s stewarding culture has created this embarrassment. Instead of passing other cars straightforwardly, the supposed greatest racing drivers in the world just stick their cars where they don’t belong and hope that the long arm of the law comes down on the other guy. It’s embarrassing.

Hamilton and Verstappen collide at Turn 2!

They are both out of the race #ItalianGP 🇮🇹 #F1 pic.twitter.com/6uuh7NhfZ4

And I say this with the utmost respect for the skill of the F1 grid and these two in particular. Hamilton and Verstappen are probably the two best racecar drivers in the world right now, and yet (to paraphrase Professor McGonagall) whenever there’s trouble, it’s always these two.

Verstappen is instructed to give the place to Hamilton, but they make contact 😱#SaudiArabianGP 🇸🇦 #F1 pic.twitter.com/QnRaWoaYzP

Yes, Ayrton Senna said famously, “if you no longer go for a gap that exists, you are no longer a racing driver.” It’s the catchphrase that launched a thousand terrible iRacing accounts. But it’s also a perfect explanation for why we have to go through this nonsense every time Hamilton and Verstappen are racing each other.

Senna said that to explain why he threw his McLaren up the inside of Alain Prost’s Ferrari on the first turn of the Japanese Grand Prix in 1990. The collision eliminated them both, handing the World Championship to Senna. It was intentional gamesmanship, payback for Prost’s championship-winning crash in the chicane the year prior.

More accurately, the quote should read “if you no longer go for a gap that [sort of] exists [and hope the other guy gets the worst of it], you are no longer a [Formula 1] racing driver.”

This is what Senna was known for in his time! Yes, he was unbelievably fast on a single lap, but it was his merciless re-writing of the rules of engagement that paved the way for Michael Schumacher, Hamilton and Verstappen to take no prisoners on their way to World Championship glory.

And so here we are, once again talking about time penalties and intentional contact and what the meaning of ‘is’ is. I’m tired of it.

Now comes the part where I offer a solution, but I’m afraid this time my solution is incomplete. To start, I would update the FIA’s directive on overtaking to this:

(Yes, I’d change the spelling of “tire” and “maneuver,” but that’s beside the point)

These new guidelines would put to end confusion about when it’s appropriate to crowd another driver off the track so long as they’re to the outside, while still allowing egregious dive-bombs to be given the penalties they deserve. In this case, I think eliminating all the stuff about the position relative to the apex, leaving the stewards more leeway to decide penalties, would be beneficial. Every corner of every track is different, every overtake is going to be different, and there’s no way to devise a set of rules that covers all of them fairly. To paraphrase former Supreme Court Justice Potter Stewart: I might not be able to define dangerous driving, but I know it when I see it.

Of course, it would be best to have one group of stewards the whole season to go along with this. That’s a conversation for another time.

But this solution is inherently incomplete because this problem is one of culture. So-called gentlemen’s agreements are a thing of the past. And I don’t blame teams or drivers for ignoring them. After all, finding loopholes in the rules is part of playing the game, but when the rules are written in such a way that encourages drivers to play penalty chicken instead of making a clean effort to overtake, things need to change.

Forcing the leading car to concede more space to the car behind might feel a little less fair, sure, but if it’s in the rules and applies to everyone equally, that’s fair enough for me. Just please, no more of whatever this is.

Hey – why not just paint in lines for lanes and everyone needs to stay in in them? The real solution – to stop pretending that in F1 the cars are actually racing each other rather than doing a 2-hour ish time trial and just send them out one by one by themselves (shortest time wins.. yay!) – obviously isn’t possible. Let’s face it – everyone involved would rather just get the first two laps out of the way to safely get into the 2 hour drama of the possibility of “the undercut or overcut” – so just line them up single file to start and get on with it. Max didn’t do any complicated calculus in the thousandth of a second he had to decide – he’s the number 1 guy in the sport with nothing to lose – of course he is going for it. I watch a lot of F1 events – and occasionally a race breaks out – but it is rare. BTW- always fascinated by the “greatest driver in the world” stuff… why is it that one of the two greatest drivers in the world driving for a powerhouse cannot win a single race? If it’s Mercedes’ fault for being behind, that obviously means any talented open wheel guy sitting in the best car that year is now the greatest driver in the world.

Makes you wonder how many wins Jimmie J would have if he drove for Carl Long!

Funny, but makes a good point!

Tom B
Reply to  WJW Motorsports

Nice post. Makes sense.
I always believed if I’m ahead I can race anywhere I want to. It’s up to the guy behind to find a way to pass. Obviously not wrecking himself!
Can you imagine NASCAR having to race using Formula One guide lines to pass cars?