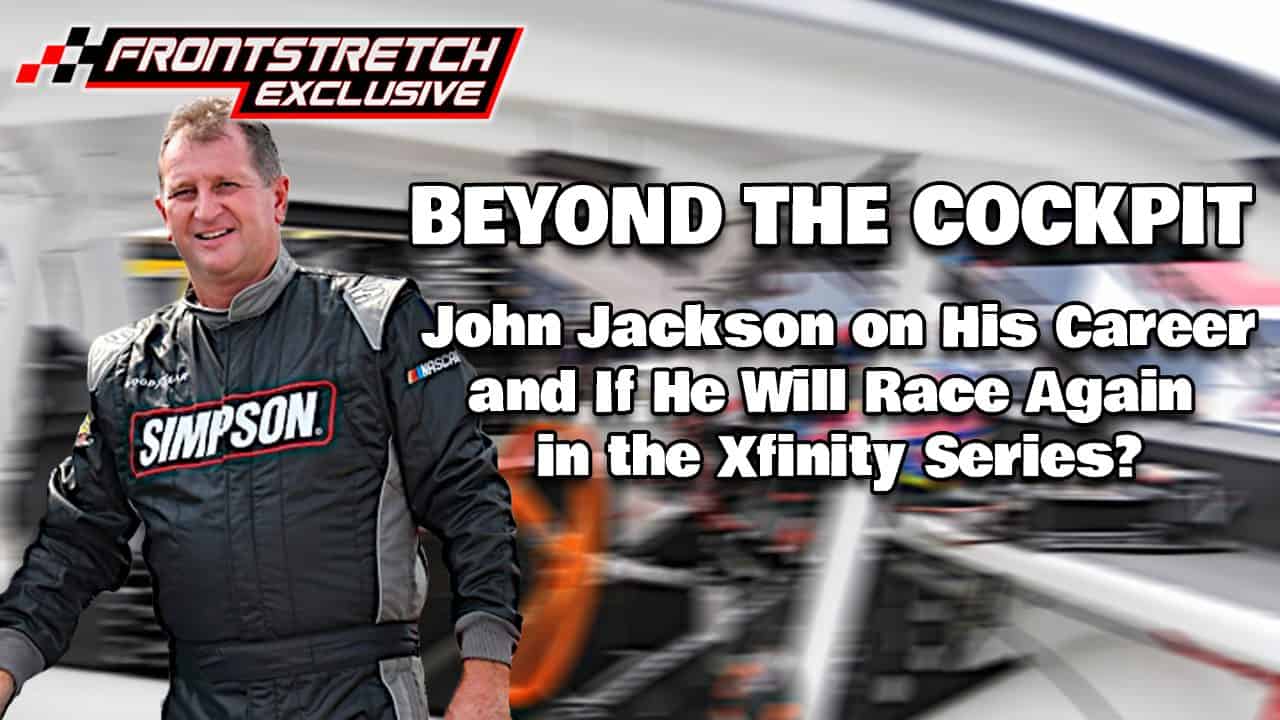 John Jackson has made 52 starts between the NASCAR Xfinity Series, NASCAR Camping World Truck Series and ARCA Menards Series throughout his career.

The majority of Jackson’s starts came behind the wheel of trucks or cars fielded by Mario Gosselin’s team, DGM Racing, and Carl Long’s team, MBM Motorsports. One notable thing about Jackson is his cars typically had James Carter Attorney on them as the sponsor.

Now, Jackson can be seen in the garage, running around and trying to get the next thing that MBM needs for its Xfinity cars.

Frontstretch‘s Jared Haas caught up with Jackson at Homestead-Miami Speedway. You can watch the interview on YouTube or read the transcript of the conversation below.

Jared Haas, Frontstretch: When did your interest in racing start out? Because you were on a completely different continent.

John Jackson: When I was born and raised in Scotland, I enjoyed racing, and I would go watch my dad, watch my friends race. It was kind of something that was in my blood and enjoyed it. It was a lot of fun.

[I] moved over to the U.S. [and] started a business and needed to make some money. Obviously, racing is expensive, so it took me a little while to get it figured out. When we did some pure stock racing at DeSoto Speedway, that was a lot of fun. I wanted to go faster, [so I] got us a late model, went faster and just kind of progressed from there to there.
See also
Waid's World: Dale Earnhardt's Christmas Parade With a Nervous Driver

Now, I got the bug, so it’s all good. I haven’t had a lot of fun. I don’t know that I’m going to be back in the seat behind the wheel. But it’s fun doing what I’m doing now, because I’m kind of a part of a bigger situation to where we could get some younger drivers and get some development stuff going.

Haas: When did you move to the United States?

Jackson: I have been here for 35 years. It was when I was a little whippersnapper.

Jackson: Well, Mario [Gosselin] used to race late models, and he [used to race in] the Hooters Pro Cup [Series]. He was an hour from my house, so it was just another Florida racer.

We got friends, and he had a couple of kids, and my kids are about the same age. When it was my weekend to take care of the kids, we’d go over to the race shop, and the kids would play. They would ride around on go-karts and have fun with Mario’s kids, so they all grew up together.

And then Mario helped me out a little bit with the late model stuff. We just kind of progressed; we got some ARCA cars, [and] we got some trucks. We did a little bit of Truck racing. That was a fun one.

Haas: One of the other partners that has helped you throughout your career, it is on your shirt, is James Carter. How did you get to know James Carter and get him involved with racing as well?

Jackson: James and I have been friends for a long time. He’s from my town, so we’re local. We hang out and do stuff together. He also raced at DeSoto Speedway so we had a long relationship. He’s been tagging along with me ever since I started.

[Carter is a] super nice guy. Anytime you got an issue, he’s more than happy to help out. He’s always there for me when I need something. Good guy to have on my side.

Haas: What is one racing moment, even in the lower series, that you wish you could change? Obviously, you can’t tempt the racing gods, but what’s one moment you’d want to change?

Jackson: Well, I had a lot of fun running late models locally, but it was just more fun when we got to the bigger tracks to go a lot faster.

I think the one thing I would have liked was the race [2008 ARCA race] at Talladega [Superspeedway] when we were leading with about three or four to go. We had a tire go down. That was tough. We restarted the race a bunch of times and led the race for a long time. It was fun, but it is what it is. You know, sometimes, things happen for a reason.

Haas: What would you consider your greatest racing accomplishment?

Jackson: I don’t know that I really have any specific memory that’s my greatest. I enjoy [racing], bringing people to the racetrack [and] having fun. Let the people come that’s never been behind the scenes in the garage, sitting on the pit box and doing the fun stuff. It gives me joy to see other people have joy that can’t come and do this.

Haas: You said you haven’t been in the driver’s seat in a while. What are you specifically doing with MBM Motorsports on a weekend basis?

Jackson: I do a little bit of everything [from] organizing the food for the guys, running the tires, do the tire work, so just hustling. [I’m] doing whatever it takes to make it all work. Sometimes, we’re coming up with sponsorships.

As far as getting back behind the saddle, I don’t know. Competition is pretty tough now. It’s hard. I did all this because it was a hobby for me, not because I wanted to be a racecar driver or a career. But, it was just fun to do. I’m all about fun. We’re not here forever. We’re not promised tomorrow. Make the most of the day.

Haas: Obviously, you don’t have any interest in getting back behind the wheel. But one thing I got to ask is, say Carl Long would full-on support having you behind the wheel and he lets you pick one racetrack that you want to race that you haven’t been at, what would you pick?

Jackson: I had lots of fun doing the road course races. I did a little bit of Mid-Ohio [Sports Car Course]. I have done Road America a couple of times. I’ve tested a little bit at Watkins Glen [International]. The road courses are a lot of fun.

But, I think Talladega [and] Daytona [International Speedway] are probably the most fun because it’s kind of anybody’s game. It’s just hard to survive the race to the end.

The last time I raced Daytona, we rode around the back, thinking, well, we’re waiting for the big one, and it never happened. About time to go, we got in the draft and got in the mix. It was a lot of fun.

I just don’t really think there is any particular racetrack that [I] would be like, ‘Hey, this is on my bucket list, and I gotta go do it.’ I just enjoy going and doing it. Just getting the opportunity to do it here and there is awesome. There are only 38 guys [in the Xfinity Series] who get to do it on the weekend, and I was one of them for a little while.