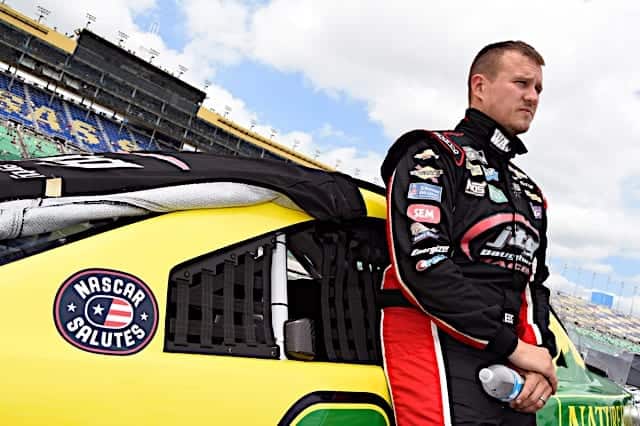 Toward the end of the 2022 NASCAR Cup Series season, talk grew about the uncertainty of exactly who would be driving Stewart-Haas Racing’s No. 41. Gene Haas wanted Cole Custer to continue driving the car, but Tony Stewart preferred to give the team’s reserve driver, Ryan Preece, the ride instead.

Preece is now the driver of the No. 41 for 2023, while Custer will be demoted to the NASCAR Xfinity Series for the team.

This is the right move for SHR. Custer has underperformed since taking over the No. 41 from the departing Daniel Suarez prior to the 2020 season, and a change has been necessary in the No. 41 camp for a while.

Custer dropping to the Xfinity Series instead of being ride-less altogether is also the right move. Custer has proved as recently as 2022 that he can still wheel an Xfinity car. At Auto Club Speedway in March, Custer took his No. 07 SS-Green Light Racing Camaro to victory lane during his part-time series schedule with the team, Custer’s 10th win in the series.

See also
Ryan Preece Driving SHR No. 41 in 2023, Cole Custer Back to Xfinity

The truth is that Custer was not ready to be promoted when he was. Despite a decent amount of Xfinity wins prior to moving up, he could have used at least another season, maybe two, there to fully develop him.

But being moved up isn’t really his fault. Custer was an unfortunate victim of being a part of the series’ Big 3 in 2019, which consisted of himself, Tyler Reddick and Christopher Bell. When Bell and Reddick were both promoted in 2020 to Joe Gibbs Racing and Richard Childress Racing, respectively, it only made sense for Custer to also move up with them.

Unlike the other two, though, Custer has had a rather forgettable stint in the Cup Series, aside from a win at Kentucky Speedway in 2020 and winning the 2020 Rookie of the Year by default. His lackluster performance over three years is ultimately what cost him his Cup ride. Even with dad Joe Custer serving as president of SHR, there was no stopping Stewart from getting his way – after all, he is 51% owner of the team.

In Custer’s defense, not only did he not seem ready for promotion, SHR also didn’t have anyone else in the pipeline to move up at that time. Chase Briscoe could have taken the seat, but before Briscoe himself had a season-long duel with Austin Cindric in 2020 for the title, he had only two wins to his credit: the Charlotte Motor Speedway ROVAL in 2018 and Iowa Speedway in 2019. He hadn’t found the success that Custer had in the Xfinity Series, leading Custer to be the one to take over for Suarez.

Much like moving on from Suarez to Custer, it was time for SHR to make the swap for Preece. With Preece being ultra competitive in all of his NASCAR Camping World Truck Series starts in 2022, as well as moments of promise in his select Xfinity starts, his signing as a reserve driver for SHR made him the obvious choice over promoting its Xfinity regular, Riley Herbst, or rushing another young driver up to Cup too quickly. Stewart probably isn’t going to take that chance again.

See also
Riley Herbst Back With SHR in 2023

If Custer has the same speed he did in 2019, he will immediately contend for wins in the Xfinity Series, if not a championship. If he can put together a good season (maybe two), he might be able to find himself back in one of SHR’s Cup cars with Kevin Harvick and Aric Almirola seemingly nearing retirement.

As for Preece, expectations shouldn’t be set too high early in the season. His experience in a Next Gen car is not enough for him to immediately be expected to compete for wins. However, Preece is a fast learner, and an even faster driver (at least in the lower series). And although Custer finished low in points the last two seasons, the No. 41 is definitely a more competitive car than the JTG Daugherty Racing Nos. 37 and 47 that Preece used to drive, and he will use that to his advantage.

It’ll be a fresh change to hear broadcasters call out the No. 41 competing for top-10 positions on a more frequent basis.

Well, if Tony is into making necessary changes these days; underwhelming, underperforming Aric A. should be shown the door or demoted too! But, for some reason the company who shall remain nameless wants him (out of all the talent out there) driving for them. A great mystery. So, the house isn’t cleaned completely yet.

Almirola brings funding, Custer did not. Smithfield (or any sponsor) does not make business decisions based solely on a drivers winning or not winning.

Find someone willing to pay millions of dollars for you to drive and you could be a Cup driver yourself kb.

Not sure Preece is any more prepared than Custer was. Tony might better start a modified team and put him in that car.