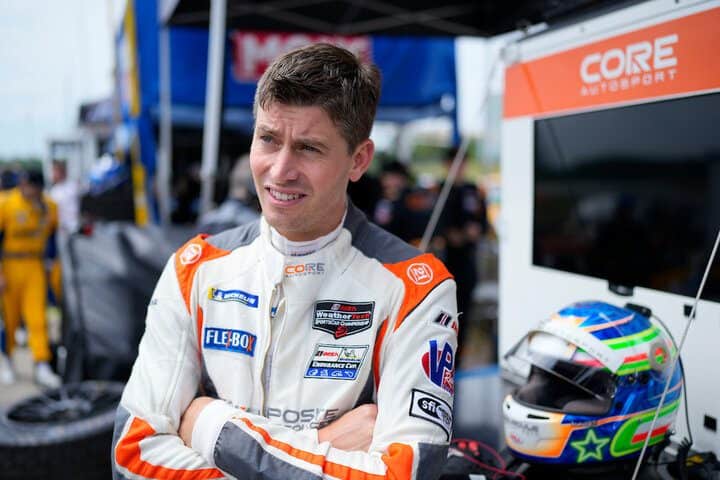 Meyer Shank Racing with Curb-Agajanian revealed their full-season driving pairing for the 2023 IMSA WeatherTech SportsCar Championship Friday (Nov. 18). Tom Blomqvist was previously announced as returning to the team for his second full-time season. He will be joined by Colin Braun, who will move back up to the top class in the series for the first time since 2019. They will be joined at Daytona by NTT IndyCar Series series regulars Helio Castroneves and Simon Pagenaud.

“I am incredibly excited to be joining Meyer Shank Racing for the 2023 season,” Braun said in a press release. “MSR were tough competitors back in my Grand-Am days and setting the Daytona speed record with them was really special. Seeing what Mike [Shank] has built from the outside has always been impressive. You can see the passion the entire team has for racing and their drive to win is really motivating.

Braun will replace Oliver Jarvis in the No. 60 Acura ARX-06. Jarvis plans to race in 2023 for United Autosports in the FIA World Endurance Championship alongside Blomqvist and Josh Pierson.

Braun comes to the team after spending most of the past decade with CORE autosport. The Rock Hill, S.C.-based organization announced last week that they are shutting down.

All but four of Braun’s starts in the IMSA WeatherTech SportsCar Championship since the merger of the American Le Mans Series and Grand-Am have been in CORE Autosport equipment. In 79 IMSA starts, Braun has 15 class victories and has won three championships. With teammate Jon Bennett, Braun won the 2014 and 2015 PC class championships and just wrapped up this year’s LMP3 championship in October at Michelin Raceway.

In IMSA’s top flite, Braun has two full seasons of experience. In 2018, he came within only a few minutes of winning the title in an ORECA 07-Gibson before falling back in the closing minutes of the Motul Petit Le Mans and finishing second in points. 2019 in a Nissan DPi was not quite as successful as he and Bennett ended up 10th in points.

Bennett revealed recently to SportsCar365.com that Braun getting the Shank deal is one of the major reasons why he chose to close CORE Autosport. The team was going to continue in LMP3 until Braun got the call.

Prior to his time with CORE autosport, Braun attempted to race in NASCAR. He ran full-time in the NASCAR Camping World Truck Series for two years (2008 and 2009). In 53 starts, mostly for then-Roush Racing, Braun scored one career victory at Michigan in 2009 and finished fifth in points.

After Roush Racing shuttered their truck program, Braun and sponsor Con-Way Freight moved to the then-NASCAR Nationwide Series. The season was a struggle as Braun crashed out of seven races and had to share the car with Matt Kenseth and Brian Ickler. He had five top 10s during the year, but got released at the end of the year.

Officially, Daytona will not be the first time that Braun will have raced for MSR. His only previous start for the team came in the 2009 Rolex 24 at Daytona, alongside Ryan Hunter-Reay, Oswaldo Negri Jr. and Mark Patterson. The team finished 16th in the Daytona Prototype class after dropping out with electrical issues.

The speed record that Braun refers to occurred back in 2013. At the time, the team raced a Ford-powered Riley DPG3 chassis that was powered by a more powerful version of the Ford EcoBoost V6 engine that was eventually used in the Ford GT program. The Riley chassis was modified to remove downforce. Braun was able to get the Ford EcoBoost-branded car up to an average speed of 222.971 mph at Daytona International Speedway over a single-lap to set an all-time record. Additional records were set for both 10 kilometers and 10 miles from a standing start.

Asked by Autoweek at the time how the high speeds felt, Braun stated it was “like we were really hauling the mail.” That was before the fastest speeds were set.

I had no idea CORE Autosport was based out of Rock Hill. Their shop is 5 min away from my moms house. Who knew!