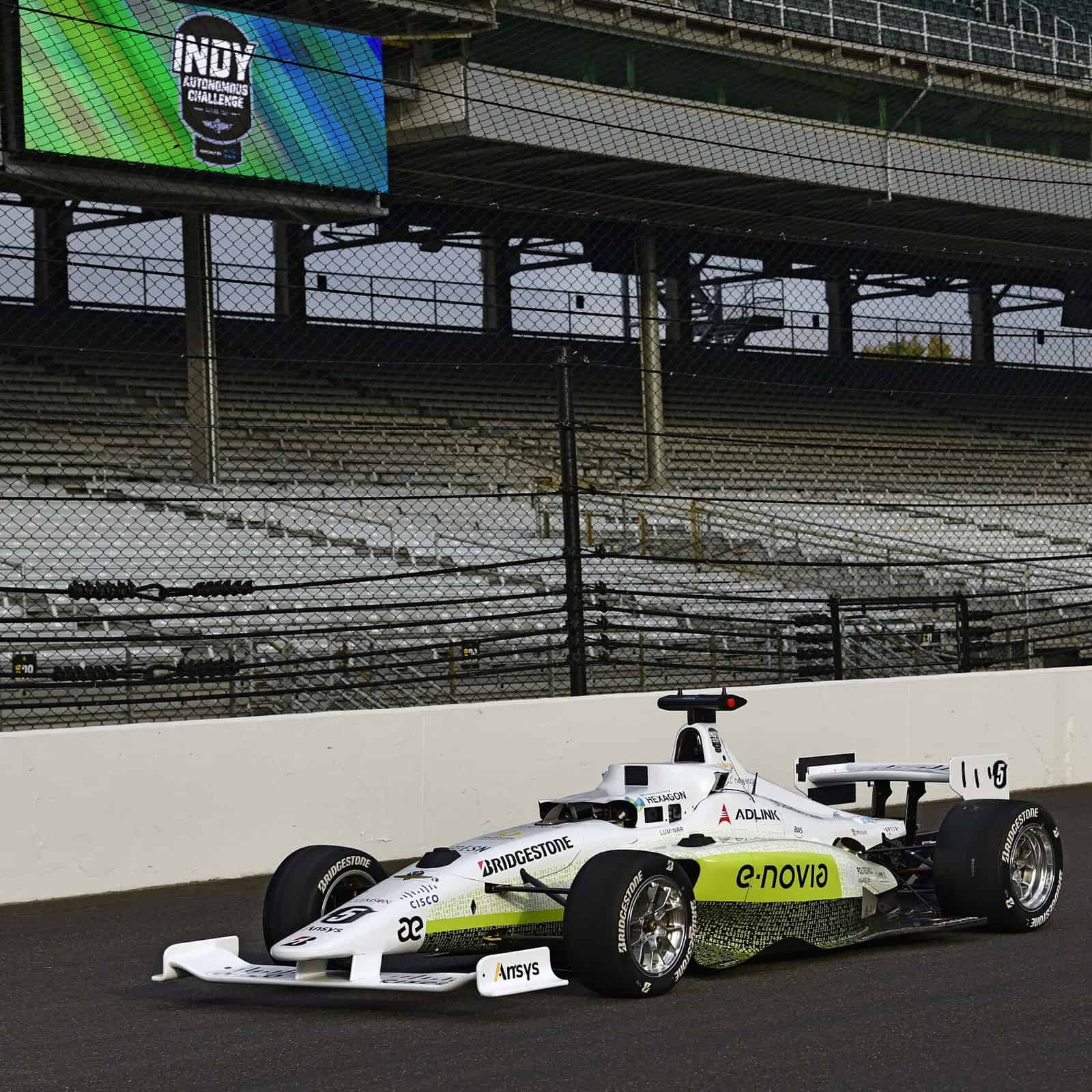 IAC, which began in 2020 and saw its first on-track action at Indianapolis Motor Speedway in the summer of 2021, asks university teams from around the world to write software for nine Dallara AW-21s, autonomous racecars based on an Indy NXT (formerly Indy Lights) chassis. With only IAC race control allowed to communicate with the onboard supercomputers during events, the series sees truly autonomous driving on some of the world’s fastest racetracks.

Instead of a traditional race format, IAC competitions see teams compete in heats, with two cars on track at a time executing controlled passing maneuvers at increasing speeds until one of the programs reaches its limits. Two such events, one each at Texas and Las Vegas Motor Speedway, have gone off without a hitch, despite extremely low track temperatures at Texas forcing race control to severely reduce speed.

Mitchell told the press, including Frontstretch, that the series’ next target is to have driverless cars safely executing passing maneuvers at over 180 mph at Las Vegas on Jan. 7. And then?

While he was tight-lipped on which venues will see exhibitions in the new year, he was confident in the ability of the software and hardware to adapt to a whole new driving discipline.

IAC teams, including two-time Challenge winners the teams, PoliMOVE (formed by PhD and Masters students at University of Alabama and Italy’s Milan Polytechnic), can rely on the AW-21’s exhaustive array of sensors: three solid-state LIDAR units, three RADAR units, six optical sensors and six GPS units, to accurately locate vehicles on track to within a fraction of a centimeter. In partnership with longtime series sponsor Luminar, across 2023 the IAC will be updating its fleet of AW-21s with production-spec Iris LIDAR units, the same units that will be used in Volvo’s EX90 passenger vehicle.

Thankfully, the Dixons and Kanaans of the world have nothing to fear – at least not yet.

“One of the missing senses is the sense of touch,” Mitchell explained.

“That’s a problem for automation in general [and] particularly for autonomous vehicles at very high speed. There are some things that we do to try to understand … the vehicle dynamics and stability, but a lot of these are model-based, not sensor-based … that technology is still something the industry is working on … our lack of that feel is a real blind spot.”

That is to say, despite advances in optical sensor technology, the most accurate way to tell how a car is handling is still by a flesh-and-blood driver’s highly sensitive rear end. Besides, turning faster lap times than your favorite drivers isn’t the IAC’s end goal.

“The biggest value for a human-driven racecar is in integrating some of these [autonomous] systems for safety … [IndyCar and Formula 1] are always looking for ways to make things safer, and looking at ways of having these kind of [autonomous] systems operating in the background, giving the human driver all of the control until … the human driver is incapacitated [or] trying to navigate through smoke when they can’t see anything, having these kind of systems turn on would make that driver safer.”

Even if autonomous technology never finds its way to the cockpit of a top-level racecar, the highly-advanced track models and simulations used to train AI drivers could also be used by race teams with human drivers to find those extra thousandths of a second. The large volume of data and machine-learning analysis of IAC teams’ telemetry could work its way over to the pit walls of IndyCar. And that extremely accurate GPS technology?

“We do have regular interactions with [Formula] 1,” admitted Mitchell. “The main thing we’ve discussed is the localization of vehicles.”

Yes, if IAC race control can know the location of cars down to fractions of a centimeter, that means F1’s stewards could use the same technology to fairly dispense penalties for track limits violations. But despite this reporter’s interest in the subject, Mitchell’s goal isn’t to improve the competition or stewarding of traditional human-controlled racing series.

“Our [final] goal … is to help win hearts and minds. There’s a lot of questions about autonomous technology: when is it going to be ready? Why am I seeing autonomous vehicles that are doing things that I can do myself? So, showing people an autonomous racecar capable of doing something that … everyone standing in this area, unless you’ve been a racecar driver can’t do safely, showing that they can navigate a real [racing] line like a human racecar driver … is really important.”

From streamlining to carbon-fiber construction, semi-automatic gearboxes to active suspension, open-wheel racing has always pushed the boundaries of what’s technologically possible. While autonomous driving is still very much in an experimental phase, testing the technology under the controlled environment of the racetrack, buoyed by the pressure of head-to-head competition with glory and prize money on the line should really be nothing new.