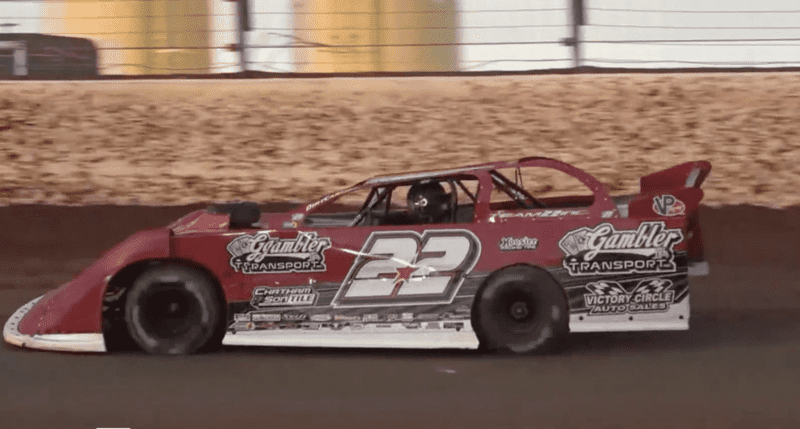 Payton Freeman emerged the only real winner of the Hunt the Front Southern Showcase, prevailing in a demolition derby at Deep South Speedway Sunday (Nov. 20).

Well, Sunday’s feature definitely wasn’t worth the 24-hour wait after Saturday’s scheduled race date was rained out. In a rough and tumble feature that mangled the field, young gun Payton Freeman scored the biggest win of his career, holding off Brandon Overton to win $22,000 in the Hunt the Front Southern Showcase feature.

🏁 @PaytonFreemanF1 Is the cream of the crop at Deep South Speedway! He takes the Hunt the Front Southern Showcase!

In a race plagued by yellow flags, the deciding lap in the 50-lap feature came on lap 26. Joesph Joiner, who had pounced from third to take the lead on the opening lap, had lost the lead to Overton before spinning in turn 4, drawing the caution while heavily damaging Spencer Hughes’s machine. Under that same caution though, Overton had to pit from the race lead with a flat tire, handing the point to Freeman.

From there, it was Freeman’s race to lose, and he didn’t. Navigating a treacherous set of bumps in turns 1 and 2, Freeman hit his marks just close enough to keep Hughes and Overton at bay. Though Overton stormed back to third and “drove the last 10 laps as hard as he could,” the high side of the track never came in and allowed Freeman to prevail on a final two-lap run to the checkers.

The win does provide major momentum for Freeman, who was recently signed by GR Smith to take over his Gambler’s Transport late model that plans to run a national touring schedule in 2023 (the ride was occupied by Ashton Winger for much of 2022).

It wasn’t worth money as much as Garrett Smith’s triumph in the Dirt Track World Championship last month, but for Freeman the Hunt the Front Southern Showcase victory may be every bit as valuable. Despite receiving very obvious aid both from Overton’s mid-race flat tire and a narrow racing groove, Freeman had every opportunity to miss his marks and hand Overton another big win, but he didn’t. Major score to close out 2022 for the No. 22 team.

Hughes finishing third without a right side on his racecar speaks for itself.

Hunt the Front’s own Jesse Enterkin grabbed hard charger honors in the Southern Showcase feature, going from 24th to ninth in the race. And this was a rebound after Enterkin suffered a suspension failure and went for a ride during hot laps.

👉 Whoops! Hot Laps are finishing up at Deep South Speedway for the Southern Showcase!

In what was the only preliminary feature of the evening that could pass for a clean race at Deep South, Mobile, Ala.’s Chad Robinson made a textbook pass for the lead of the factory stock feature with two laps to go. However…

Robinson then proceeded to overdrive turn 2 on the white-flag lap, allowing Brandon Harris to take the victory.

There likely wasn’t a driver in the Hunt the Front Southern Showcase feature field Sunday night with more laps around Deep South Speedway than Bo Slay, but that didn’t stop him from slapping the wall during qualifying, getting caught up in at least one of the multi-car pileups and suffering multiple flat tires during the feature.

Joey Moxley blew an engine while running in a transfer spot during the first heat race Sunday and missed the feature.

Regional modified ace Todd Neiheiser made a 450-mile haul from Saturday night’s racing program at Volusia Speedway Park to Deep South on Sunday to tag the back of the $2,000-to-win modified feature, only to get caught up in a demolition derby. Four yellow flags flew in the first two laps, preventing Neiheiser from moving forward, then a lap 4 wreck collected his No. 72 car.

Arguably the longest haul of any driver was Rusty Schlenk in the Southern Showcase super late model feature. But despite Schlenk being no stranger to big wins (he scored the $33,000 Wood Tic at Merritt Speedway in Michigan last summer), Schlenk was collected in multiple pileups before drawing his own yellow flag on lap 26 after stopping on track in turn 4.

There may not have been a more unfortunately named race than the Hunt the Front Southern Showcase. Seeing the yellow flag fly 11 times in a 50-lap event hardly screams Showcase.

The #southernshowcase isn’t looking so showcasey down at the @DeepSouthspeed. Looks a lot like the #sc400 @FMSpeedway last night on @FloRacing. Tough weekend to go racing…

Sunday’s race marked the first super late model feature I’ve ever watched at Deep South Speedway, which felt a lot like watching races at Cherokee Speedway. And no, that’s not a compliment. Cherokee has a well-documented track record of cars running close to each other without a prayer of actually making a pass.

Can’t help but wonder why it was necessary to split a 27-car super late model field into four heat races. Three nine-car heats is a nice round set of numbers and would have shaved time off a race program that felt at times like the 24 Hours of Loxley, Ala.

I wasn’t at Deep South Speedway Sunday, but even from 900 miles away I was confused as all get out listening to the track PA describe how the super late models were to line up in turn 2 for qualifying, then turn 4 for heat races, then in turn 4 but not strapped in for the feature, etc. What’s more, the PA got it wrong at least once.

If there was one positive from Sunday’s Southern Showcase feature, it was race officials adhering to a rule that they were not allowed to pull fenders off racecars under caution. It’s one thing to allow drivers to stop and have officials check their cars for damage or rubs, but preventing said officials from actually touching/augmenting racecars in competition is a huge gray area that’s present in too many racing series coast to coast.

Where it Rated (on a scale of one to six cans with one a stinker and a six-pack an instant classic): The Hunt the Front Southern Showcase scores two skunky PBRs that have been sitting forgotten on the floor of the pickup all season long. Credit to the HTF crew for putting on a big-money race late in the year and at a track off the beaten path for super late models, but this one was sorely lacking in execution, with a yellow-filled feature on a track surface that never widened out.

Up Next: Thinkin’ Dirty heads west for the finale of the 2022 USAC National Midgets season, the Turkey Night Grand Prix at the Ventura Raceway in California. Coverage of the $10,000-to-win event can be found Saturday night on Flo Racing.