*Sprint Cup: Sandbag Central At The Beach?* No, I’m not talking about the soft stuff your NASCAR favorites will be tanning on the next two days, enjoying a well-deserved break at Daytona before practice starts up midweek. I’m looking at strategy, in particular during Saturday night’s Sprint Unlimited that could cause a different look to Sunday’s Daytona 500.

During this weekend’s race, while Kevin Harvick led the most laps it was clear Matt Kenseth had the fastest car. For most of the first segment, his No. 20 Toyota remained in command up front, blocking any challenges while the field struggled to simply stay attached. But as rivals realized Kenseth was a favorite, they also recognized he suffered from a paralyzing disadvantage: both his Joe Gibbs Racing teammates were sitting in the garage, out of the race and unable to help. That left Harvick and company choosing to railroad past during the third and final segment, booting Kenseth from first place on Lap 62 to the outskirts of the top 10.

*Come back every Thursday, to the website to get Jeff’s advice on who to pick for your team, all season long and see if you can beat your favorite staff members! More special announcements about this league to come.*

Daytona is just around the corner, so it’s time to rev up that NASCAR fantasy engine again. When it comes to playing fantasy sports, we all like to think we have some inside secret, or maybe some unique idea that can shoot us to the top. We like to think we know more than the other people we’re playing against.

But having played in many a fantasy league in many a sport (baseball, football, basketball, hockey, NASCAR) more often than not, having success is more about not making the huge mistake than coming up with a sleeper pick who comes up big consistently. So whether you are in league that limits drivers to a certain amount of races for the 36-race season (Yahoo gives drivers nine) or a where you have drivers for an entire season, one of the key factors is to not mess up that early “sleeper” selection.

@jamiemcmurray: Our 2nd child was born earlier today. Both mom and Hazel are going great. We feel so blessed to have 2 healthy kids. @mattkenseth: I can’t wait to get back to racing in the nationwide series, Thanks @gamestopracing and @resers! @BubbaWallace (Darrell Wallace, Jr.): Kyle to us(drivers): “I didn’t bring home any hardware last …

Today’s Season Preview Topic: Bruton Smith has said this January start-and-parking is detrimental to the sport and must be stopped. Do you agree with that statement, and if so, jump in Bruton’s shoes and give us an idea to stop it.

Tom Bowles, Editor-In-Chief: I think start-and-parking has been a problem for years, done in part to make a profit and in part because teams feel hopeless. If you’re no better than a 35th-place car, and the difference between that and 34th in the purse won’t get you an extra set of tires then why finish the race?

I think that mentality was partially addressed by NASCAR through redistributing the purse. But cutting money for 39th through 43rd by $4,000 isn’t enough.

Tom Bowles, Editor-In-Chief: I feel a bit more positive on this issue than I did two weeks ago. There has been a sudden jump in announcements as of late for the smaller teams, from Tommy Baldwin’s two-car organization to Swan Racing’s No. 30 that makes me think new deals with companies are still possible.

The problem to me, in a nutshell is Hendrick’s attitude towards the No. 88 car. The owner is claiming companies are lining up in droves to back Earnhardt but he just hasn’t found the right fit, pushing him to the point he’ll even fund the ride out of pocket if necessary. That leaves us with two realities. One, Hendrick is full of you-know-what and the car, which at one time I’ve been told had $40 million in cash getting pumped to it has priced itself out of the market.

*Burning Question: How much longer can Martin be competitive?*

With Martin, at this point it’s continually a question of age. The veteran turned 54 years old in January, and while his skills haven’t diminished at the rate of many of the drivers of his generation (Terry Labonte, Dale Jarrett, Rusty Wallace) it’s only a matter of time before Father Time catches up with him – physical fitness be damned. Even the timeless Harry Gant, who holds the record for oldest Cup victory at 52 years of age couldn’t hang on forever. Holding his retirement tour in 1994, two years after that record he couldn’t even pull down a top-5 result despite driving for the same organization.

Today’s Season Preview Topic: Jimmie Johnson has now gone two years without a championship after winning five in a row. Does the team need to change anything for 2013 or is it simply a case of bad luck catching up with them?

Tom Bowles, Editor-In-Chief: I’m sure many NASCAR-ites are reading this question and groaning. There’s no question Johnson, outside of his rabid fan base has become Public Enemy No. 1 for the old school crowd’s complaints about everything from the sport becoming too politically correct to a potential double standard amongst crew chiefs. But for Johnson, 2013 is a crucial year if he’s looking to inch closer to that iconic mark of seven titles. If you look at the careers of the men he’s chasing, Petty and Earnhardt once they hit their prime there were never huge gaps in between first place…

*Burning Question:* Can Almirola get it done in Sprint Cup?

Richard Petty Motorsports’ selection of Almirola before the start of 2012 was a bit of a head-scratcher. Almirola had just come off of a mediocre season in the Nationwide Series with JR Motorsports, in which he failed to win a race (or really even come close). Drivers such as Brian Vickers, Trevor Bayne and maybe even Ricky Stenhouse were available as quality alternatives.

*Did You Notice?…* The battle over start-and-parking is revving up for 2013? The first salvo was fired at the end of January, where Bruton Smith went so far on the Media Tour as to ask reporters in attendance to stop the practice, where cars come to the track, park and collect the prize money for profit.

“Start-and-park should not be a part of what we do,” said the Speedway Motorsports, Inc. owner, whose tracks, he claimed, “donated” tens of millions of dollars to “this cause” in 2012. “Either NASCAR should shorten the race or something in order to stop this, but I think it’s got to be stopped.”

“I hope we look back in a year and (start-and-park) is history. Because it should be history.” 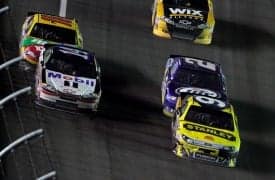 Today’s Season Preview Topic: All we’ve heard about this offseason is the Gen-6, Gen-6, Gen-6 and how it’s ready to fix NASCAR’s problems. Based on what you’ve seen in testing, heard from teams or through your sources will the car be as competitive as we’re being told? Also, will we see some of the underdogs break through, creating parity versus the upper-class teams or will the Hendricks, Roushs, etc. have the edge?

Mike Neff, Short Track Editor: The Gen-6 car is definitely an upgrade from the CoT. It appears as though there is more downforce on the front of the car along with greater mechanical grip. Crew chiefs are telling us that the increased downforce will make it easier to get close to a car and actually pull out and pass. That would seem counterintuitive, though because increased downforce would seem to require more air on the nose. The one thing that does seem to be true is that the car is harder to drive. That means it will put a greater emphasis on driver ability and a good driver will be able to do things with the car to make it respond.