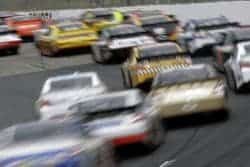 Yes, Sunday’s race was far from a classic, with rock hard tires again making track position the sole dictator of everyone’s race strategy. But this one was shaping up awful nice before a communication breakdown between Denny Hamlin and Darian Grubb put the No. 11 car that was the class of the field back far enough in the field that even a brilliant late-race charge couldn’t produce a checkered flag. And there’s not many race tracks out there that can overcome hard tires anyhow…or the mentality that every driver that didn’t win had, that they’d win in September…when it counted for something.

Kasey Kahne’s victory at New Hampshire sure shook up the wild card race. Kahne basically assured himself a spot in the playoffs, while he put other drivers who were looking good heading into the weekend on less solid ground.

Ryan Newman, Joey Logano and Jeff Gordon are those drivers on thin ice. Newman and Logano have a very slim chance of winning another race before The Chase, and Gordon’s chances of winning twice also seem unlikely. 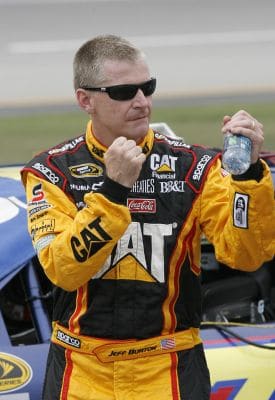 As the NASCAR Sprint Cup Series prepares to race at its only New England venue this week, talk is also heating up about Silly Season. As drivers and sponsors begin to make moves (Matt Kenseth has already announced that he will be leaving Roush Fenway Racing for an as-of-yet undisclosed team, while sponsor U.S. Army has declared its plans to leave NASCAR racing at the end of the year), there are always questions. After the Army announcement earlier this week, Ryan Newman is suddenly in the midst of the talk, while in the background, quiet speculation has been made about the career of another veteran driver, Jeff Burton. 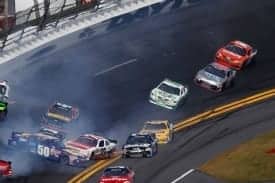 *ONE: The Irrelevance Of The Firecracker 400*

Tony Stewart emerged unscathed from a vicious finish at Daytona to score his third win of the 2012 season and his fourth at the World’s Center of Racing. One never would have known just about any of those things listening to Stewart in Victory Lane, sans the fact that victory lane is where he was standing. The same guy who made highlight reels for years courtesy of his fence climbing after winning the same 400-mile summer race in 2005 was remarkably subdued, distracted in talking about Daytona being special, rattling off sponsors as effectively as Michael Waltrip. 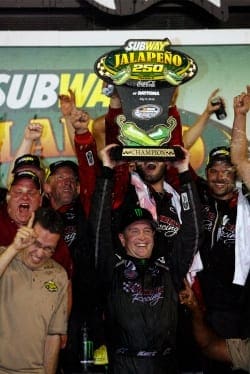 Friday night’s Nationwide race at Daytona seemed to have the best of both worlds for restrictor plate fans. Yes, the outcome was ultimately decided by tandem drafting. But in the process, there was more than enough pack racing to whet fans’ appetites, turning the event into a wild competition of record-setting proportions. 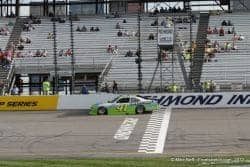 _In a span of under two years, Timmy Hill went from an ARCA rookie to a Cup Series driver. But now as NASCAR 2012 hits the summer stretch, Hill is back in Nationwide racing, having seen firsthand just how challenging life at the top of stock car racing is. Back with the team and organization that he won the NNS Rookie of the Year title with a season ago, Hill spoke to Frontstretch at Kentucky about his whirlwind season, and career, looking ahead to the rest of the season._

Bryan Davis Keith, Frontstretch.com: *You’ve certainly had an interesting season. You started the year as a Cup driver, but now here you are back with the team you won Nationwide Rookie of the Year with last year. Take us through 2012 for Timmy Hill.*

When one thinks of stability with regard to Sprint Cup racing, it’s likely that one thinks of Matt Kenseth and his iconic No. 17 Ford. The 2003 Cup champion has, for more than a decade, been a continual race winner and Chase contender, a rock of composure and consistency complimented by a “Killer Bees” pit crew that never falters.

It’s hardly surprising that a driver that’s proven unflappable (sans when an unstable teammate appears ready to go 15 rounds on Martinsville’s pit road) wants stability as much he’s been associated with it. With Penske Racing coming back to the blue oval for 2013 and the sponsorship well at Roush Fenway Racing proving so dry that both the Nationwide and Cup programs have had to contract in the past 12 months, one can hardly blame Kenseth for taking a deal in hand for the next season and beyond. This move, drastic as it may be, is not surprising.

As the onslaught of summer approaches in advance of Independence Day, and as the kids require much more time and energy (of which they have a lot. As for me? Not so much….), I thought it would be a good time to clean off what used to be my desk and make sense of NASCAR as we reach the halfway point of the season.

And what an odd trip it’s been thus far. From monsoons and jet dryer explosions to driver suspensions and the return of the Prodigal Son to victory lane, the 2012 Sprint Cup season has offered its share of thrills and chills –-or has it been more green than yellow, or more parading than passing?. It depends on your frame of mind, I guess.

Marcos Ambrose recorded his third top 10 (eighth) in the last four races at Sonoma. Ordinarily, that would grant him a spot in the Hot or Warm section of Who’s Hot and Who’s Not, but anyone who watched the race and knows how talented Ambrose is at the road courses, saw Sunday as a missed opportunity for the Richard Petty Motorsports driver.

Ambrose currently sits in 16th in the standings and needs at least one win, along with some consistency the rest of the way to have a shot at the Chase. Unfortunately for Ambrose, he watched one of his two best chances to go to Victory Lane slip through his grasp on Sunday. After starting from the pole, he led laps early before fading and never reinserting himself as a factor. Ambrose wasn’t alone.

State Park Speedway put on a special race for a special friend on Thursday night. Flip Merwin was a snowmobile racer who passed away from injuries suffered during a race accident in 2003 at the Eagle River World Championship Snowmobile Derby. Since the Wimmer family purchased State Park Speedway they’ve held the Merwin Memorial race …