Martinsville is just what NASCAR needed, right? It had everything everybody wanted without talk of aero-push or aero-loose. It was like tastes great AND less filling. No way! The first thing it featured was the (somewhat overblown) feud between Kurt Busch and Brad Keselowski, complete with Kes formally addressing the camera in his post-accident interview and letting Busch, who was apparently watching …

Once upon a time, there was a track that featured scintillating racing. She was a lovely track, and people were always fond of her and what she provided. One of the aspects that made the racing so good was how the tires wore out and how the drivers had to figure out how to deal …

It’s about time they got started! The Verizon IndyCar Series revs up this weekend with its traditional opener in St. Petersburg, Florida. Well, it’s not really one of those long-standing traditions in theory — the race has only been opening the season since 2009 — though it had usually been the second race on the …

This racing season is off to a fantastic start. Really. Two 12-hour races in Cup. The last three Nationwide races were won by Cup drivers. The Truck Series… wait, do they still race? Even Formula One is rolling hot with derision over its new six-cylinder engine and the lack of noise it produces. And INDYCAR hasn’t even …

Kurt Busch announced on Tuesday that he’ll be racing in both the Indianapolis 500 and the Coca-Cola 600 later that day in Charlotte. That’s 1,100 miles of racing in two different kinds of vehicles. To make sure that almost anyone who pays attention to sports knew about his attempt, he made all the media rounds, … 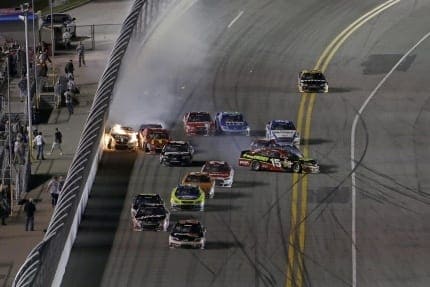 The Daytona 500 has become a strange affair over the past few years. Rain delays. Pot hole issues. The famed jet dryer incident. And now, another rain delay. The Frontstretch’s staff has debated whether or not the race was compelling — but hey, Dale Earnhardt, Jr. won! — and then the viewership numbers came in …

JOIN OUR FANTASY RACING LEAGUE!! The Frontstretch has a big league on Yahoo!, once again and we’d like you to be a part of it. Come compete with your favorite racing experts by clicking here and signing up. Our Group ID is 10532 and the password is stenica… so don’t miss out! Happiness Is… is …

Ryan Newman gave a scathing review of racing at Talladega Superspeedway, something that seemed an adrenalized version of earlier criticisms of the track. Since restrictor plates were added to the cars to reduce horsepower, racing at Daytona and Talladega has evolved into, well, take your pick: equalizer; crapshoot; fake racing; 150 laps of racing with a big crash to thin the herd; or an immensely entertaining race product. It doesn’t matter which option you choose, or if you go with a mixture of some of them. Restrictor plate racing is its own entity, and one that sits outside the normal parameters of racing where a talented driver with a strong car can distance himself from the field.

*In A Nutshell:* With varying pit strategies, and after a number of wrecks, the final 20 laps came down to a battle between Takuma Sato, Josef Newgarden, and James Hinchcliffe. Sato held strong, with a few questionable moves that seemed like blocks, but he could not gap those behind him and ultimately fell victim to Hinchcliffe’s better car during the final lap. Hinchcliffe earned his second win of the year (and his career) while Sato took second, Marco Andretti third, Oriol Servia fourth, and Newgarden faded to fifth.