The caution flag flew for Matt Kenseth breaking a track bar mount on lap 310. The lead lap cars pitted and Brad Keselowski never visited pit road again, making his tank of fuel last 89 laps en route to his fifth win of the season and second of the Chase.

Brad Keselowski took the lead after the final round of green flag pit stops and had a car that was simply better than everyone else for the final run to the checkered flag.

A green-white-checker finish saw Denny Hamlin grab the lead and hold off Jeff Gordon to take his series leading fourth win of the season.

Jimmie Johnson had the dominant car once Mark Martin was speared by the pit wall opening in a scary, mid-race crash. But as J.J. was strolling to what would have been his series-leading fourth victory, a valve spring failed with less than 15 miles left to run. That handed Greg Biffle Christmas in August, gift-wrapping him a second victory after a green-white-checkered finish and a pesky push from Michigan native Brad Keselowski.

_The Cup Series heads to Loudon, New Hampshire for the first time this season this coming weekend. Last year the Stewart-Haas Racing team owned the track, with Ryan Newman winning the pole position for both races along with winning one of the two while his boss and teammate, Tony Stewart, took the trophy in the other. Newman’s crew chief Tony Gibson is our guest for this week’s edition of Tech Talk and talks about the importance of aerodynamics, mechanical grip and rolling the center of the corners._ 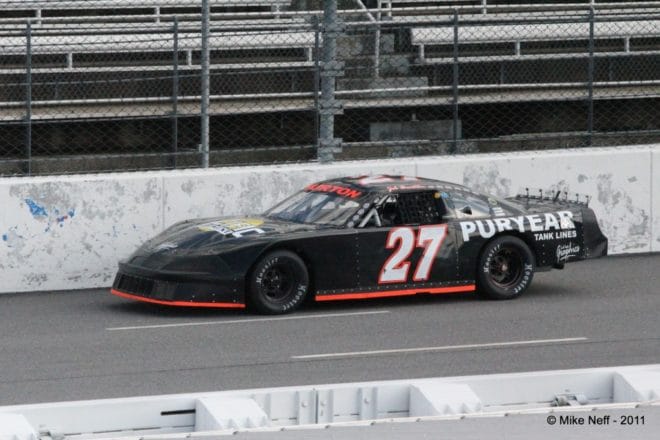 Greg Marlowe: A Late Model stock chassis is based more off a [Nationwide] car. Perimeter-style chassis with a steering box. They are based more on a conventional car style and they have to weigh 3,100 pounds. A Super Late Model is basically a 2,800 pound, straight rail, lightweight chassis, aluminum interior, just a quicker race car, period. There are less rules so we can do more what we need to do to make the cars faster and it just makes for a really good race.

Brian Vickers’s best race of 2011 was easily the Chase race at Loudon. He turned in his best qualifying effort of the season, slotting in with a third-place start.

At Kentucky Motor Speedway during the inaugural Cup visit to the track, David Reutimann led seven of the eight laps he led all season and chased Kyle Busch to the finish line.

Justin Allgaier ended the season as the number one driver at Turner Motorsports. Reed Sorenson was tops for most of the season but was dismissed by the team.

Earnhardt’s true best moment of the season again involved Kevin Harvick, but it was in the spring race at Martinsville.