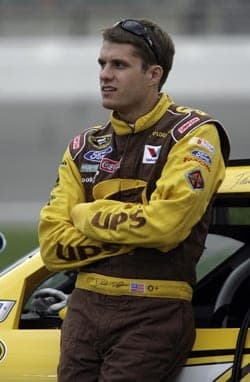 For Sprint Cup’s crowded field of free agents, matching the current state of unemployment in this country Christmas will come a little early this year – at least for one. Kurt Busch’s departure from Penske, leaving a seat that was 11th in points last season produces a top-tier job opportunity for 2012 at a time when fully-funded Sprint Cup teams are set to decrease by almost 10 percent. Yes, whoever gets it will likely get a one-year deal regardless of their success in the car: “A” level free drivers like Matt Kenseth or Denny Hamlin could be available next season, with Sam Hornish, Jr. moving up regardless of funding in 2013. But who wouldn’t take a “Kasey Kahne” type of “lame duck” ride, a temp job that could produce both victories and a Chase appearance immediately?

Michael Jordan. Brett Favre. Tiger Woods. The world’s greatest athletes, in any sport share moments where they literally willed themselves to win.

Feel free to now add Tony Stewart’s name to that list. And he knows it.

“I would have to say that under the circumstances,” reflected the newly-crowned Sprint Cup champion, minutes after taking the checkered at Homestead, “I’ve got to believe that this is definitely one of the greatest races of my life.” 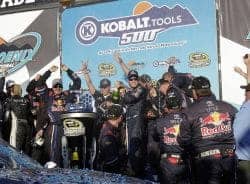 It was April of 2010, in the heat of the Arizona desert, where Kasey Kahne got busy answering questions on what it was like to land your dream job… only to wait nearly nineteen months to get it. Signed by Hendrick Motorsports earlier in the week, the pending free agent had earned the keys to a No. 5 car that had just finished runner-up in the title Chase to Jimmie Johnson. With crew chief Kenny Francis all but a package deal, the future was bright … it just seemed a long way off. The road ahead seemed daunting; a “lame duck” year with Richard Petty Motorsports, then God-Knows-What in 2011 before assuming the reins of a Hendrick Chevy come February 2012.

One year ago, Texas equaled triumph for a Joe Gibbs Racing operation cocking back to deliver what they thought was NASCAR’s equivalent of a knockout punch. While Jimmie Johnson’s team imploded, their pit road area turning into a deleted scene from _Days Of Our Lives,_ driver Denny Hamlin won the race, crew chief Mike Ford talked some trash and the four-year title reign for Johnson’s No. 48 was left hanging by a thread. JGR, whose risky move to Toyota once cost them superstar Tony Stewart, was on the verge of handing the manufacturer their biggest piece of hardware yet. Add in Joey Logano finishing fourth that day at age 20, along with three-time season winner Kyle Busch, just 25 that Sunday, the organization posed a triple threat of twenty-something drivers peaking years from reaching their prime. 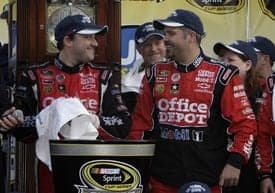 There have been many, many times when Tony Stewart could have seriously challenged for the season title. One of the sport’s most versatile drivers, his ability to turn scorching hot during a season’s second half in midsummer makes him the perfect closer under NASCAR’s hokey, let’s make a stick-and-ball playoff system. Already the owner of two Sprint Cup titles, most times seeing Stewart pop up at or near the top of the Chase wouldn’t do much more than raise an eyebrow.

Until this year. For Halloween, the perfect costume for this aging veteran should have been the Grim Reaper; his entry to the Chase, more than any other not named Denny Hamlin, was supposed to mean little for a championship bid predicted to be DOA (dead on arrival).

It was the Fall of 2008, and carnage ran rampant over the Talladega racetrack – as the Big One tends to do – with a finger of blame landing squarely on Carl Edwards. The awkward-timed bump, spinning teammate Greg Biffle around took out a dozen cars and all but giftwrapped the Chase for the Championship to the burgeoning Five-Time dynasty that back then went by the name “Jimmie Johnson.”

The latest version of NASCAR’s Chase has resembled an _American Idol_-style elimination, without the horrible singing, Ryan Seacrest, and 80% of the viewership. We started with the final 12 title hopefuls at New Hampshire, but each week, no matter what happens there’s always one person who ends up eliminated before moving on.

On Sunday, it was Jeff Gordon’s turn as the number of realistic championship contenders got trimmed to eight. The four-time titlist, labeled a prohibitive favorite after his late summer charge never really established much consistency the past four weeks, stumbling through this playoff before a blown engine officially put him out of his misery Sunday on Lap 264. 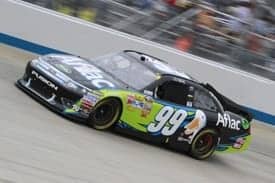 In every Sprint Cup race, 43 drivers come roaring to take the green. On every Sunday night, hours after the checkered 42 of them lay awake, fighting off sleep and daydreaming through every moment, every turn they could have handled differently to take a trip to Victory Lane.

“I’m going to lay in bed,” said Carl Edwards, giving his best looking-at-the-ceiling impression after running third. “My wife’s going to yell at me and tell me to get over it. That’s just how it goes. That’s how racing is.” 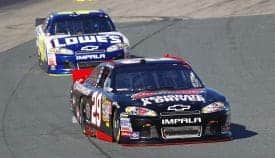 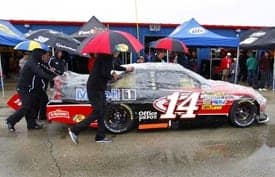 Apparently, when hyping up this year’s Chicago-based Chase debut, NASCAR forgot to send an invite to Mother Nature. She had her hissy fit Sunday, rain popping the hot-air playoff balloon by postponing the scheduled Sprint Cup race until Monday at 11 AM Central – a time when there’s still a 30% chance of more green stuff on the radar. It was a murky end to a week of pomp and circumstance, designed to pump up Sprint Cup’s new playoff system by placing it smack in the country’s No. 3 media market.