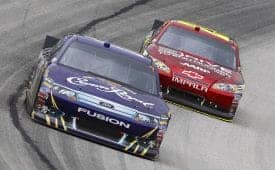 Whether you participate in a Chase fantasy NASCAR league or not, you have reached the home stretch of the season. The last ten races often make or break the fantasy season. Here is the primary reason why. Fantasy owners who have relied on the same top drivers all year long to accumulate points are starting to run out of picks with those drivers. Don’t be surprised when someone from the top of your league’s standings starts sinking in this final stretch of the season.

Hopefully, it is not you.

While many of the top-tier Sprint Cup organizations have been storing away some of their best chassis’ for the Chase, fantasy owners should have stored away some of their top drivers. With only ten races left in the season, it is time to map out your path to the championship. Start planning now which drivers you are going to start in which Chase races. Chances are there is going to be a conflict somewhere. For example, if you have one selection left with *Kasey Kahne* – a driver who has had a rollercoaster of a year – determine now where you might use that pick.

There is only one race left until the Chase for the Cup begins. The pressure will be on drivers such as *A.J. Allmendinger*, *Clint Bowyer* and *Paul Menard* to go for the win on Saturday at Richmond. For fantasy owners in Chase-style leagues, it could mean the same thing.

Owners who have felt comfortable with their position in the Chase have been able to lay back and take risks on drivers they might not normally pick, while they save valuable picks with top drivers at each level for the 10-race playoff. For those of you on the edge or the even the outside looking in, Richmond is time to go for broke just like it is for those aforementioned drivers. It’s time to score maximum points to make the Chase cutoff, and here are the drivers who can help you get there.

*Kyle Busch* made a statement with his win Sunday at Michigan. It wasn’t surprising that he was able to gain his series-leading fourth victory of the season. The manner and place in which Busch was able to perform the feat did speak volumes, however. Rowdy started the race with a mediocre car, but worked with crew chief Dave Rogers to get to the front for his first Michigan victory. In thirteen previous starts at the track, Busch had just four top-10 finishes.

Michigan had been a weak point in the schedule for the No. 18 team. In 2011, there have been no weak points. As of late, there have only been strong performances. Busch has recorded top-5 finishes in seven of the last ten races, making him a dependable fantasy pick anywhere. As the Chase for the Sprint Cup approaches, *Denny Hamlin* and *Carl Edwards* are fading and Busch has looked like the driver capable of knocking off *Jimmie Johnson*.

In NASCAR’s Sprint Cup Series, there were 13 different winners through a 36-race season in 2010 compared to 14 in 2009. Well, last Sunday *Marcos Ambrose* helped blow those stats out of the water; he became the 15th different winner through 22 races in 2011 and the fifth first-time visitor to Victory Lane. Those numbers are astounding, easily on pace to set a modern-era record as the list should just keep on growing through early Fall.

Why? Factor in some of the names that have been close, but have yet to earn a first-place finish this season like *Tony Stewart, Clint Bowyer, Greg Biffle, Dale Earnhardt, Jr., A.J. Allmendinger, Kasey Kahne, Joey Logano* and *Juan Pablo Montoya.* We easily could have more than 20 different winners by season’s end, beating the record of 19 set way back in 2001

With only five races until the Chase begins, teams are taking more risks in strategy to put themselves in position to win races and score big points. Fantasy owners should be doing the same. In leagues where driver picks are limited, now can be a time to stash away ones you need for when the Chase rolls around.

By saving those picks at a place like Watkins Glen, fantasy owners aren’t necessarily putting themselves in any worse position. At this road course, many of the front runners will be drivers who have had limited amounts of success as of late such as *Marcos Ambrose* and *Juan Pablo Montoya*. Meanwhile, owners have a chance to score big points with these guys while saving mid-level drivers such as *Clint Bowyer* and *Dale Earnhardt Jr.*

Entering 2011, *Trevor Bayne*, *Regan Smith* and *Paul Menard* had combined to score just two top-5 finishes in 244 starts. Twenty races later, they have more wins (three) than they had _top-5s_ before this season in what’s been a watershed year for first-time winners. These three underdog drivers, in particular have shined, sweeping arguably NASCAR’s biggest three races — the Daytona 500, the Southern 500 and Sunday’s Brickyard 400.

The Brickyard 400 sits behind only the Daytona 500 on most driver wish lists. While Sprint Cup racing at Indianapolis Motor Speedway may not always be action-packed for the fans, it is thrilling for the drivers because of the tradition the track holds.

Since NASCAR has started coming to Indianapolis in 1994, that tradition has only strengthened. It didn’t hurt that *Jeff Gordon* and *Dale Earnhardt* were the first two NASCAR drivers to visit victory at Indy. Great drivers like *Dale Jarrett*, *Bobby Labonte*, *Ricky Rudd* and *Bill Elliott* followed them.

There are a number of different formats of fantasy NASCAR leagues that are out there. Many now offer the chance for fantasy owners to compete in a 26-race regular season in order to qualify for a 10-race Chase for the Cup. Unless you are in league where picks for each driver are not limited, driver selection for the next eight races will be critical.

Owners currently on the outside of the playoff bubble will be forced to use up picks with top drivers to try their hardest to get in the Chase, while those who are already in contention may choose to take some risks at a race like New Hampshire. It may not seem like a big deal now, but it could decide the outcome of the owner’s season. The owner who has to use up top-driver selections now will have to take more risks in the Chase, and the owner who takes the risks now can save for when they count the most.

If the season hasn’t been unpredictable enough for fantasy owners, with 12 different winners in the first 17 races another wild card race has been thrown in at the halfway point. I guess NASCAR decided the series needed another 1.5-mile track on the schedule… it’s hard to believe it has been a decade since a new track has been added in the Sprint Cup Series, when Chicago and Kansas held inaugural races in 2001. Both are 1.5-mile tracks, in case you weren’t catching the trend.

But since the Cup Series has never visited Kentucky, there are many unknowns heading into the weekend. Out of all the 1.5-mile tracks on the schedule, Kentucky most resembles Kansas. Kentucky has 14 degrees of banking in the corners compared to Kansas’ 15 and the banking and shape of the two tracks’ tri-ovals are nearly identical (10 degrees at Kentucky; 10.4 at Kansas). The major difference between the tracks is Kentucky is still a one or two-lane race track, meaning Saturday’s race winner will most likely be running the bottom all night long.

Races with two-car breakaways should be more predictable than races with large 35-car packs, right?