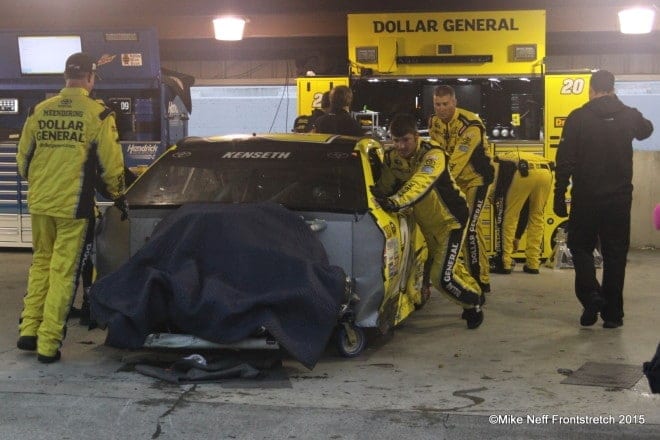 Friday, at Daytona International Speedway, NASCAR distributed rulebook changes designed to specifically categorize personal conduct violations. The intent would seem to be curbing any activities that might shine a disparaging light on the sport. While it is a noble concept in theory, providing little change in NASCAR’s philosophy its unintended consequences could cause a negative impact long-term. …

To say the NASCAR Sprint Cup Series is going through a change heading into 2016 is an understatement. The charter system, reduced field size, the overtime line and the low downforce package are all creating quite a bit of upheaval heading into the year. But one thing that hasn’t changed for the last four years …

As is customary during the annual NASCAR Media Tour, Brian France appeared before the media to give his annual State of the Sport address. After extolling the success of the 2015 season, from increased fan attendance to the wild success of the latest iteration of the Chase, he turned his attention to the 2016 season. …

The single most depressing thing to see at a race track is rain. It halts everything, it puts people in a bad mood, it prevents events from running on time and it pushes back all the other plans that fans and competitors have as they wait for activities they came for to take place. When …

The time and effort that has been poured into the rollout of the Gen-6 Cup car is probably more than the GDP of most Third World countries. The manufacturers have cooperated with each other in unprecedented fashion, and NASCAR has worked with all of them to make the cars as equal as possible while still maintaining the characteristics of the street cars they represent. The release has been forced down the throats of the fans, media and drivers to make sure everyone is on the same page as NASCAR tries to move back to the head of the sports landscape, or at least in the passenger’s seat next to the NFL. Unfortunately, after the first eight days of exposure on the racetrack in competitive events, the report card is somewhere between a C- and an F.

The NASCAR Hall of Fame is now 20 members strong with the induction of the class of 2013. The five members of the class all made significant contributions to the sport albeit in different ways. A mechanic, a driver owner, and three drivers make up this year’s group of honorees. Leonard Wood never drove a race car but his knowledge of making pit stops faster probably resulted in the passing of more cars than any driver ever did. Herb Thomas was the most successful driver in history in terms of winning races compared to how many he entered. Buck Baker not only had a great career but shaped thousands of others with his driving school. Rusty Wallace was the foil to Dale Earnhardt and is responsible for keeping Roger Penske in the sport, which led to Brad Keselowski’s 2012 championship. Finally, Cotton Owens, taught people in the sport that safety was more important than anyone at the time thought and yet still built race cars that could win races and titles including the first for David Pearson. The stories and accomplishments of these men would fill volumes, but here is a brief synopsis of each.

The Sprint Media Tour is a four-day trek through the racing landscape around the greater Charlotte area. It allows media members the opportunity to eat better than they will for the next month, drink more than they do the rest of the year and are told the “inside information” inside each team for the coming year — depending on how many insightful questions they come up with. But in the end, media and fans learn far too little, hear a lot of the same answers, realize every team thinks they’re going to win the championship and end up wondering what would Brian France do without a teleprompter.

With all that being said, there are still a few small observations you pick up along the way. Here’s some of mine that didn’t fit within the confines of a “normal” column…

There is no question that fans will be bombarded with the term “Gen-6” car throughout 2013, especially in the first few weeks of the season. But what does that mean, and how is this car different from the oft-criticized CoT?

Let’s attempt to find out. There are a few obvious aspects of this “reformed chassis” that clearly identify it as a Gen-6. The most obvious one is that the bodies on the cars more closely resemble those that can be purchased off the showroom floor. The adjustment, aesthetic in nature was done to please fans who felt the three remaining makes of Ford, Chevy, and Toyota had begun to look exactly the same.

Bruton Smith is well known for many things, but one of his more endearing features is that he has built a speedway empire by always focusing on the fans and their experience. During this week’s activities on the Sprint Media Tour Presented by Charlotte Motor Speedway, the chairman of SMI held court with the heads of all eight of his racing facilities. The focus of the presentation was to announce new initiatives designed to further engage the fans, a set of goals he’s entitled “Fans First.” The program will have several components, but it is designed to further remind fans that they are the most important piece that keeps SMI together.

The annual NASCAR press conference, during the Sprint Media Tour presented by Charlotte Motor Speedway was held on Tuesday afternoon in the NASCAR Hall of Fame. There were several topics discussed, both during presentations and the question and answer session with NASCAR CEO Brian France and President Mike Helton. The running theme surrounding these discussions was simple, contained within the mantra for the sport: Racing to Innovate. Several initiatives, from the Gen-6 car to the new qualifying system are hitting the racetrack for the first time this year and, all parties claim have been designed to make the sport better in the long run.