There’s just something about Martinsville. NASCAR’s oldest track, on the schedule since 1949, has a certain ambiance that is missing at the high-banked, high-dollar speedways that take up the lion’s share of the schedule. The little track, nestled in the foothills of the Blue Ridge, seems to have been passed over by the sands of time.

But there is another reason why the drivers want to win at the little paperclip-shaped oval in the hills, and it’s not just bragging rights. It’s the trophy.

Since 1964, the speedway has handed out what is perhaps the most unique prize in motorsports, a grandfather clock, manufactured locally by Ridgeway Clocks. It’s worth a cool ten grand, but that’s not why the drivers want it. It’s different, a symbol of conquering what is still one of the hardest tracks in all NASCAR to master.

Well, it’s certainly been an eventful week. On and off the track, it’s been many things, but boring isn’t one of them. From a wild and crazy Talladega race that sparked heated debate about restrictor plate racing, to Kurt Busch in the headlines for more than just his change of rides, to the first Cup race without an Earnhardt in the field in 33 years, the stories just keep on coming, and in the background is a Chase that’s shaping up to be a three-horse race among a brash, outspoken new threat, a five-time champion, and a once-spurned rival. No matter which side of the fence you sit on, no matter which dog you have in the fight, it’s great to have so much to think about.

I live in the Charlotte area and have spent a beautiful autumn weekend at the track. Fall is a little bittersweet; while the end of the racing season is a needed break for all, it’s also a little sad knowing that it’s almost over. I’ve been busy this weekend, but I’ve also had time to think about a lot of things, from the big stories to the smallest ones…and here is a little bit of everything.

Dale Earnhardt, Jr. knew he didn’t feel right. Struggling with headaches in the days following a multicar crash at Talladega, Earnhardt finally had to admit that something wasn’t right. It wasn’t the aches and pains a driver can feel for a few days after a hard hit, and deep down, Earnhardt knew it. “I knew that I didn’t feel (right)—you know your body and you know how your mind works, and I knew something was not quite right,” Earnhardt said on Thursday. The lingering headaches prompted Earnhardt to contact Dr. Jerry Petty, a Charlotte neurosurgeon who has worked with numerous athletes, including other drivers.

Teams continued testing of the 2013 Sprint Cup cars this week at Talladega Superspeedway and with it some optimism amid reports that NASCAR will allow race teams some test sessions at sanctioned tracks and that the sanctioning body is considering allowing teams some areas to work on the cars and dropping the controversial rule that locks the top 35 team in owners’ points into each race. All of these are very positive changes for NASCAR, and hopefully, race fans will respond by watching races on TV or in person, if for no other reason than to see if changes will make the competition more exciting, which is certainly something people are always hoping for.

For NASCAR, this is a big deal. A lot hinges on fans responding favorably to changes, possibly more than many casual fans realize. And in some ways, 2013 could be a defining season for the future of NASCAR.

Look at the headlines this week, and you might think they tell the story of the early weeks of this year’s Chase. First Brad Keselowski and then Denny Hamlin grabbed attention for their winning efforts at Chicago and New Hampshire, respectively, and each was touted as the title favorite after the victory. And then, of course, there’s Jimmie Johnson, the five-time Chase champion who is the overwhelming favorite to win this weekend at Dover and who also happens to have the points lead.

And then there are the drivers on the opposite end of the spectrum: Jeff Gordon and Dale Earnhardt, Jr. and Greg Biffle and Matt Kenseth and Kevin Harvick…and the speculation about what has gone wrong, why they’re done and why they think they’re not. Throw in a couple of props to the Michael Waltrip Racing team and how they’ve flown in under the radar and are poised to make the team one of NASCAR’s elite. That about sums it up, right?

=NASCAR needs a villain. Those are words that have echoed around the sport over the last few years. Really, we’ve heard them since the death of Dale Earnhardt, but it seems like they’ve gotten louder in recent years. NASCAR needs a bad boy, one who will be unabashedly aggressive on the track and proud of it off the track. One who knows how to use the ol’ chrome horn once in a while, one who will knock you into next week and then blame you for it. Yes, people say, that is just what we need. Except it isn’t.

What NASCAR really needs, even more than a villain to play the spoiler, is a real, honest-to-goodness blue-collar hero. 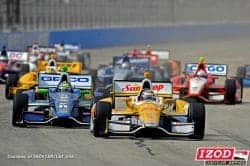 Love NASCAR? Of course you do, that’s probably why you’re reading a NASCAR column! But this week, I’m going to switch it up and talk another type of racing..Indy cars. Yeah, that’s right, those funny-looking pointy cars that sound more like mosquitoes than monsters..and go really, really fast. The bottom line is, if you love racing but aren’t watching IndyCar, you’re missing a whole lot. As NASCAR revs up its championship Chase this weekend, IndyCar will be deciding theirs once and for all. You say you need some good reasons to try out the season-ending, championship-deciding IZOD IndyCar Series race this weekend? Well, then, try these on for size: 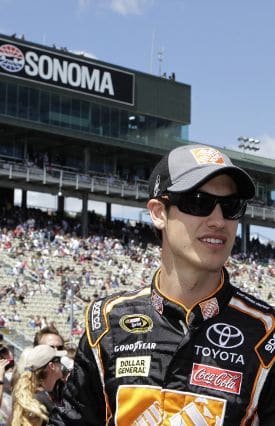 On Tuesday of this week, NASCAR’s Silly Season came to a head with Matt Kenseth’s long-awaited announcement that he would move to the No. 20 at Joe Gibbs Racing. Just a few hours later, the current driver running that Toyota, Joey Logano, announced his move to Penske Racing and the No. 22. On the surface, Kenseth’s and Logano’s choices look similar, basically lateral moves from one high-profile ride to another.

But look underneath, and they couldn’t be more different.

Hot or cold. Wet or dry. High or low. Good or bad. There are plenty of extremes we apply to NASCAR racing—and to the rest of our lives–every week. Often, it is an “either / or” situation: the track is either wet or it’s dry. A team either qualifies or goes home. You either win or you don’t.

But not everything is one or the other…often, the truth lies somewhere between.

It seems like many people in the sport, from drivers to fans, forget that there is middle ground. To be fair, it’s not limited to NASCAR or even sports; one simply has to view a few political ads to realize that candidates like to make it a game of extremes when perhaps they ought to be appealing to a more moderate audience. Whatever the case, it appears that in this sport, we love extremes.

NASCAR fans head to Bristol this week for the first time since the track made major modifications earlier this summer in an attempt to narrow out the racing groove and bring back the type of racing that the track was known for: beating and banging, and using the chrome horn to make a pass. Since the track was reconfigured in 2007 with progressive banking, the wide groove made two- and three-wide racing the norm, rather than the bump-and-run, which was often good for taking out several cars in one move. In short, fans are asking Bristol to turn back time.