And just like that, we’re at the halfway point of the arduous Sprint Cup schedule: 18 in the books, 18 still to go and just eight races until the Chase… and all the associated hype begins. As seems to be pretty much de rigueur with NASCAR across the first half of the 2011 campaign, there have been ups and downs, highs and lows, great races and eye-gougingly terrible ones: in short, a little bit of everything. So as we head into the second half of the schedule, starting this weekend at New Hampshire Motor Speedway here are my midseason awards:

It was pretty much a typical weekend for arguably NASCAR’s busiest driver. Not only did he pick up a win in the Truck Series (his fifth victory in just eight races), Busch finished third in the Nationwide race and then completed the weekend with a victory in the inaugural Cup race at Kentucky Speedway.

There’s nothing like some on-track fourth of July fireworks to mix things up, and Saturday night’s slugfest on the high banks of Daytona International Speedway were no exception. In the course of not one, but two green-white-checkered finishes we were treated to a typically insane finish to a plate event; it’s a level of excitement we’ve come to first expect, then appreciate whether racing in Florida or at the big, bad track in Alabama.

But now, it’s time to settle in as the unpredictability of plates gives way to the grind of a summer playoff push. This weekend’s race also marks the midway point of the season, so as the chaos of Daytona dies down, with nine races to go until the Chase starts let’s delve into nine observations about the season so far, starting with this Saturday night’s race in Kentucky and running through who the title favorite appears to be at this point… 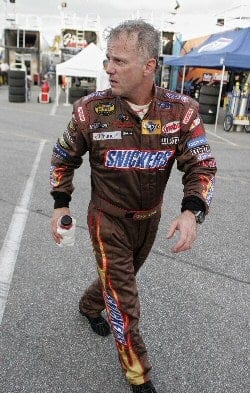 Whenever I am asked by one of my bemused Manhattan or London dwelling friends why on earth it is I like a sport that only turns left in circles, I never really know quite what to say. After all, explaining a passion and conveying the full sense of the fervor is not necessarily that easy. It’s not that I don’t try – and indeed I’m vociferous in my arguments in praise of NASCAR – but for various reasons I don’t even feel I ever quite do the sport justice. (Other than, that is, telling people to go to a race and then they’ll get it.) Well, thankfully, if I’m asked this week, I’m able to tell my questioners that this week yep, they really be turning right with a trip to Infineon Raceway.

After an almost blemish free season, no mean feat in a sport that humbles you quicker than Kyle Busch drives his road cars, Sunday’s 500-miler at picturesque Pocono gave Carl Edwards just a little reminder of how the other half live. By way of a quick refresher, Edwards won the final two races of 2010 at Phoenix and Homestead, to finish in fourth spot; and he’s started this season rather like he left off the last. Until his 37th place finish at the Tricky Triangle, Edwards had one win (Las Vegas), seven top-5’s and ten top-10’s – both of which are series best marks – with a tick under 400 laps led. In short, it’s been a terrific start for the driver who might just be the one to unseat the juggernaut that is Double J from picking up a sixth straight Sprint Cup crown.

Listen to the many PR machines operating in the realm of major league stock car racing, and each and every one of these episodes were regrettable lapses in judgment, lapses in control. Examples of the stress of this sport getting to professionals. Richard Childress wasted no time making that clear after NASCAR levied monetary fines and probation against the longtime owner on Monday, stating, “I let my passion and my emotions get the best of me. I accept the penalty NASCAR announced today.” Big surprise there, for a fine and probation is about as much a slap on the wrist as Stephen Garcia getting suspended from football… for the spring.

Sunday really was a phenomenal day of auto racing with the Formula One Grand Prix of Monaco in the morning, the 100th Anniversary of the Indy 500 in the afternoon and the 52nd running of NASCAR’s longest race as the evening’s nightcap: the Coca-Cola 600. But even in all the years of three of the most storied races in motorsports there cannot have been many stranger consecutive finishes than the conclusions we witnessed at the venerable Indianapolis Motor Speedway and then later that evening in eerily similar circumstances at Charlotte Motor Speedway.

In both races the wheelman of the National Guard car (how fitting on Memorial Day weekend when we remember those who have sacrificed so much) led the race at not only the white flag but also exiting turn four with the checkers in sight. For both JR Hildebrand, an IndyCar rookie from Sausalito, CA and a rather more famous name, Dale Earnhardt Jr. from Kannapolis, NC, the race would not end in raucous champagne celebrations in Victory Lane, rather crushing disappointment of being so close and yet so far.

If you are a racing aficionado of any particular level of intensity, this coming Sunday, May 29th, is about as close as you can get to perfection on wheels with three of the most famous races running in all of motorsports: The Formula 1 Monaco Grand Prix, the Indy 500 and lastly the Coca-Cola 600 all in one glorious day. Coupled with the fact that Monday is a public holiday here in the States, it means you can grab a seat on your couch, rig your TV up in the yard or head to your favorite motorports friendly bar and sit back and enjoy 1261.887 miles (to be exact to the fourth decimal point) of racing without worrying about schlepping to work the following day.

First up in the early morning–or late, late night depending on your proclivities–at 6am EST is the *Monaco Grand Prix*, arguably the most storied race in all of Formula One. Sunday’s race will be the sixth on a 19-race slate – the 58th official F1 race through the streets of the tiny principality which at just 0.76 square miles is the second smallest country behind the Vatican City; and with a population of around 35,000 people is also the most densely populated country in the world.

When Sprint (then NEXTEL) took over from Winston as NASCAR’s title sponsor in 2004, ending the sport’s 32 years of association with the tobacco giant, they didn’t hesitate to make major changes. But in the midst of those adjustments (can you say Chase?) one small tweak the telecommunications company implemented, flying under the radar so to speak was adding a Fan Vote component to the All-Star Race. As a basic idea, it’s a good one because it allows the rank and file to have their say while ensuring the Most Popular Driver not already qualified makes the main event.

In the simplest terms and the most convenient of definitions, it is extremely hard to win a NASCAR Sprint Cup race.

Such displays of patriotism, as we saw Sunday night here in New York City, are not uncommon in our great sport of NASCAR.