A few weeks ago, I wrote an article stating there was no way there would be more than 16 winners by the time we got to the Chase, and that points still mattered, along with consistent finishes. With Joey Logano’s win at Texas on Monday (that I predicted three weeks ago over at Athlon Sports), I might …

NASCAR has long been home to a range of varied personalities. From the quiet to the quarrelsome, the range of emotions and cast of characters has served to establish the fabric of the sport. That said, this past weekend painted a perfect picture of who the Sprint Cup Series should focus their efforts around if the …

Ever since NASCAR made an announcement, changing the new Chase rules for 2014, there has been a common thread to the comments made regarding team performance: Win and you’re in! You can take chances every week! Once you win, the R&D begins, and teams will get more aggressive! To quote General Hummel from The Rock, …

A couple of weeks ago during the Las Vegas Race, I noted that the Roush Fenway Racing teams – and any Ford outside of the Team Penske tandem of Brad Keselowski and Joey Logano were seemingly out to lunch. Carl Edwards managed a Top 5 atLVMS largely on the strength of some late race pit strategy, … 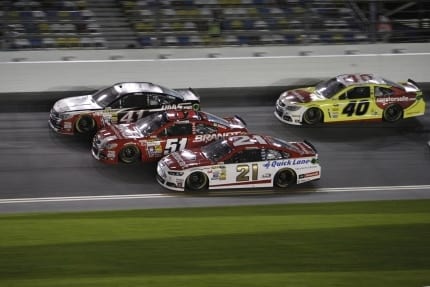 Primetime vs. Sunshine Following the excitement and frenzy of Dale Earnhardt, Jr.’s Daytona 500 win Sunday, the chorus of cries began to run towards putting NASCAR’s marquee event in primetime. “It’s more exciting! It’s under the lights! It’s just like football!” It’s a horrible idea. We’ve dabbled with late start times before in the Daytona … 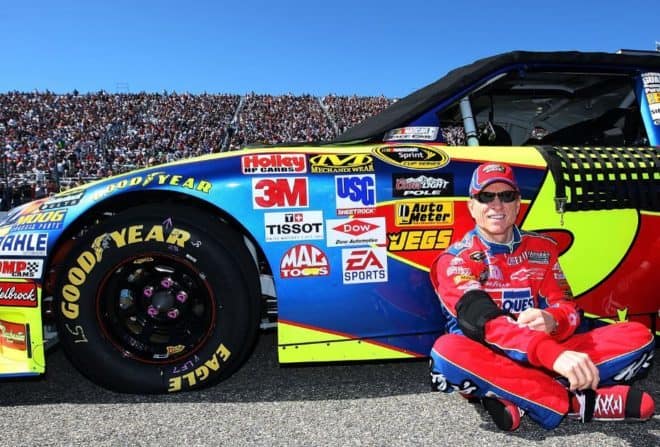 One of the most storied careers in motorsports came to an end Sunday at Homestead-Miami Speedway. After 882 starts in the NASCAR Sprint Cup Series, Mark Martin has (presumably) competed in his final race – and done so on his terms. Ready to move onto the next chapter of his career, the owner of 40 …

Sunday’s Pure Michigan 400 was aptly named. The race was Pure Michigan International Speedway, bringing all of what we’ve come to expect at MIS in August — repave be damned.

Yes, the new asphalt did play a role, to some degree. The formerly multi-groove track used to see cars running four different lines, fanning out in all areas around the 2-mile oval. However, following a repave and a re-tire to keep the speeds under 220mph (at one point, quarter-sized chunks of rubber were coming off from blistering) it has become more of a one-and-a-half groove track in 2012. Speeds, once dangerous are still well in excess of 210 MPH down the straightaway.

But the more things change, the more they stay the same. The names you normally expect to see up front and factors in the race were there. Mark Martin leads active drivers with five career wins at MIS, the last coming in 2009 when – coincidentally – it was Greg Biffle who ran out of fuel on the last lap, while Martin sped past, only to run out of gas a corner later and coast to the win. 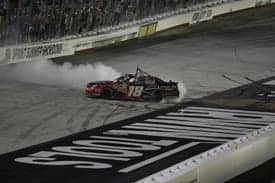 As much as I hate tired, trite clichés, one that I do believe in happens to be the simple phrase, “Less is More.”

It is an axiom that has proven to be correct in the automotive industry time and time again. The 1968 Plymouth Roadrunner – a stripped out Satellite with a 383 engine and some non-color cartoon stickers — was expected to sell a little over 2,000 units its first year and sold over 45,000. The Toyota Prius is essentially a battery in a box with little in the way of creature comforts, style, or power – but it has developed a rabid following, establishing itself as the poster child for the cause du jour of guilt-ridden/eco-conscious drivers everywhere.

Gambling used to have a bit of a negative connotation to it. Now, it is to be celebrated and encouraged, particularly if it is on television and/or if you are wearing a stupid hat and mirrored state cop teardrops while engaging in degenerate behavior. With that said, if you know anybody who’s going to Vegas, they might want to scour the sports books to see if any of these are on tap; and if so, to lay some money down. I firmly believe and fearlessly predict that each of these the next few scenarios are money in the bank and guaranteed to happen.

It goes without saying, but NASCAR deals with a lot of criticism on a weekly — no, _daily!_ — basis, and sometimes rightfully so. After all, they make questionable calls without explaining them to fans, they tend to show favoritism without saying why, and go directly against peoples’ wishes when it comes to issues like the schedule and rules changes their constituents openly resist.

However, I’m a believer in giving credit where credit is due, and I think NASCAR is in line for some praise. Prior to the start of the 2011 season, the sport announced several changes to the way the points would be structured, earned, and set. That garnered a mixed response from fans and the media, somewhat expected on how, exactly they would work out.