It’s not often NASCAR races threaten to be called by sunset, especially with many tracks having installed lights. But when an afternoon event is delayed three hours due to rainy weather, these things tend to happen.

Not that Regan Smith probably minds. After NASCAR cut the race by ten laps Saturday, with looming darkness while a late crash by Joey Coulter dragged the event further into black skies, Smith made a daredevil move coming into the tri-oval on the final lap. As he dove to the inside, several cars wrecked behind him, but Smith pulled ahead right at the point of caution, winning the Aaron’s 312(ish).

Brad Keselowski’s 2013 was off to a solid, if unspectacular start; eight races in the Sprint Cup Series had yielded four top fives and seven top 10s, but recent weeks had found him less and less a part of the conversation when it came to victories. Despite entries in every Nationwide Series race to that point, he had only managed two top-5 finishes, while fellow Cup regular Kyle Busch ran away with the majority of the first six races.

In a period of five races spanning from April 2008 to April 2010, Kyle Busch was unbeatable in the Nationwide Series at Texas Motor Speedway. In April 2013, the trend potentially began again.

Busch led 91 laps Friday night (April 12) on the way to victory in the O’Reilly Auto Parts 300. It was his sixth Nationwide victory at the track, the most of any driver in the series, and his third straight win in 2013.

The Las Vegas native continues to impress in his return to Joe Gibbs Racing for his Nationwide entries in 2013, after competing for a year in his own equipment. Busch now has four wins in six races this season, inciting restlessness for fans who have already grown tired of the Cup regular racing and winning in the Nationwide Series.

For the third time in five races this season, Busch emerged victorious in the second-tier series, leading 92 laps en route to his 54th career win in the NASCAR Nationwide Series. It was a commanding performance from the Las Vegas native, who started from the pole and was substantially challenged by points leader and runner-up Sam Hornish Jr., who added 28 laps led.

His win continues a return to form for Busch, who returned to Joe Gibbs Racing in the Nationwide Series in 2013 after driving for his own team in 2012. After being unable to secure any sort of win in the series last year, he’s already scored enough victories this year to compensate — and then some. 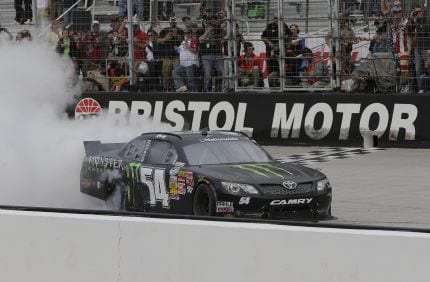 Despite his standing as a highly-touted prospect in the NASCAR ranks, Kyle Larson had a tough start to his rookie season in the Nationwide Series, crashing out of two races (one a spectacular launch into the Daytona catchfence that injured many spectators) and finishing a good-but-not-great 13th in his other event. Saturday at Bristol, Larson …

_Editor’s Note: Anyone looking for information on the last-lap crash, which injured 33 fans will find it elsewhere on our website. The following is just a race racap only… check out the links below for the latest information we have — as well as reaction to the incident._

*Inside The Nationwide Series: COPD 300*

As smoke cleared from a last-lap horror, “Smoke” the driver was wheeling his way into Victory Lane once again at Daytona. Tony Stewart, who had spent most of the day riding comfortably in the back of the pack timed his move perfectly to surge forward during the race’s final stretch. His winning percentage here, as a result in the Nationwide cars has jumped to an absurd 50%, with seven victories in 14 career starts – including five of the last seven.

If Joey Logano has taught the Nationwide Series anything in 2012, it’s that there is still no contest: Joe Gibbs Racing still has the strongest cars in the game. Though he was challenged late following a lap 198 crash triggered by championship contender Elliott Sadler, Logano was able to hold off JGR teammate Brian Vickers to score his ninth win of the 2012 season. Vickers, Ricky Stenhouse Jr., Kyle Busch, and Austin Dillon rounded out the top-5 finishers.

Although Kyle Busch showed flashes of his past dominance in NNS competition early at Texas, Kevin Harvick cruised to a relatively easy win in his final start of the season on Saturday, leading 127 of the 200 laps run. Ryan Blaney trimmed the margin of victory by more than two seconds during the final green-flag run but was unable to catch the No. 33, settling for a career-best runner-up finish. Polesitter Busch, Ricky Stenhouse Jr, and Denny Hamlin rounded out the top 5 in this event dominated by Sprint Cup regulars.

A championship comeback if there ever was one, Ricky Stenhouse Jr. saw his championship hopes vanish then reappear again over the course of a race due to some patience, strategy, and a little bit of luck. Around lap 100, Stenhouse made contact with Joey Logano and in the process severely damaged his No. 6 machine. After getting trapped a few laps down to repair the damage, Stenhouse fought tooth and nail to get back on the lead lap and finally received the free pass on lap 163. From there, Stenhouse worked his way up through the field and on the final caution found himself right back in contention.

Joey Logano proved once again that the Nationwide series is his world and the rest of the Nationwide drivers are just squirrels trying to get a nut. Logano led a race high six times for 62 laps. Logano beat Kevin Harvick to the line for the win. Elliott Sadler, the series point leader came home in third. Kyle Busch drove the No. 54 to a fourth place finish with Denny Hamlin finishing up the top 5.

Logano has not run all of the races on the Nationwide schedule this season but, when he has climbed behind the wheel in the junior series, he’s won almost half of the races. This victory is number eight for the year for Logano in Nationwide competition, far and away the most in the series. Ricky Stenhouse Jr. is second in season wins with five while Sadler has four. The race was slowed by five cautions, four of them for on track incidents. There were nine leaders who participated in a total of 21 lead changes. Sadler played it conservatively because he is the leader in the point battle, and in the end added to his point lead by not opening himself up to potential pit road pitfalls.