Following a slow start to his young Penske Racing career with bad luck defining some mediocre performances, AJ Allmendinger found himself at Martinsville Speedway for the Goody’s Fast Relief 500.

Brad Keselowski ran out of gas, down the backstretch with 58 laps left, allowing Clint Bowyer to breeze by. That left the No. 15 team virtually unencumbered as they turned on the fuel mileage jets, put a Rip Van Winkle spell over the stands, and advanced to a shocking intermediate oval victory at Charlotte.

It wasn’t the win he has been searching for for more than a year and a half, but for Carl Edwards, a seventh-place finish was a welcome ending. For Edwards, who has just three top-five performances in 2012, this week’s result was only the second to fall inside the top 10 in the last eight weeks, just his 13th top-10 finish in 31 races. That’s half the number he had a year ago, when Edwards lost the Sprint Cup title to Tony Stewart in a tiebreaker. The top-five stat is even more dismal. Edwards finished in that group 19 times in 2011, more than six times as often as 2012. No matter where his points finish is, it will be the worst of his career because he didn’t make the Chase cut and can finish no better than 13th.

It’s time for the Chase! Aren’t you thrilled? Oh. Well, actually neither am I. The fact is the haze of summer has given way to September blue skies and the children have returned to class. Life takes on a calmer pace and I look forward to quiet afternoons devoid of screaming children and angry parents. …

This one wasn’t over until the checkered flag was thrown. Wow.

Jimmie Johnson, who had dominated the race, had his car get out from under him on the final restart and collected second-place Matt Kenseth. From there, it was on. 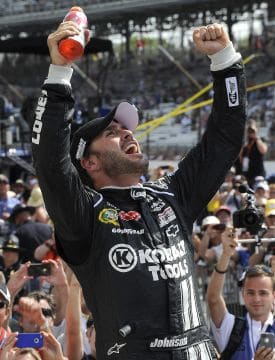 The Brickyard 400… the ultimate example of sizzle over steak.

With news coming this week that AJ Allmendinger’s “B” sample came up positive, who was first in line to jump on the ‘Dinger’s bandwagon? That’s right, ‘ol Meth Mouth himself, Jeremy Mayfield. “I don’t see how any man, if he’s got any (manhood) at all, can go and take what he’s fixing to have to … 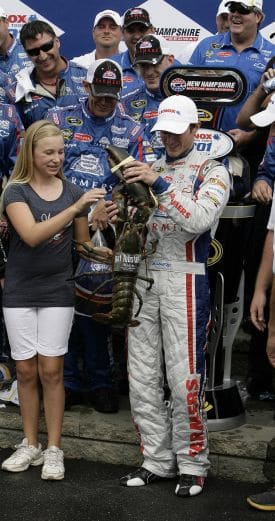 Denny Hamlin dominated much of the race but miscommunication in the pits dropped him to 14th. Kasey Kahne inherited the lead and with clean air on the nose of his Chevy drove to an easy win.

The Passion of The Kurt Kurt Busch’s late-race heroics in the Subway Jalapeno 250 at Daytona last Friday evening was the type of “Born Again” moment many have been waiting for from the petulant pilot of the Phoenix Racing Chevrolets. While AJ Allmendinger is likely bemoaning his last best chance gone awry at Penske Racing …