Scott Dixon On IndyCar Return: ‘We’re All In This Business To Win’ 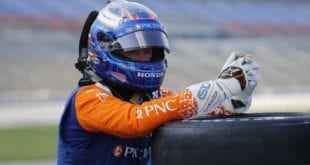 Scott Dixon was the unquestioned star of the NTT IndyCar Series’ long-awaited return on Saturday (June 6), as the five-time champion easily won the Genesys 300 at Texas Motor Speedway. The victory was Dixon’s third at the track, the most of any active driver in the series, and gave him …

END_OF_DOCUMENT_TOKEN_TO_BE_REPLACED

Driven to the Past: Parnelli Jones & AJ Foyt

It was in 1960 that Parnelli Jones came east with the Fike Plumbing Special out of Phoenix which was powered by a small-block Chevy, and began kicking the butts of the venerable Offenhauser-powered cars. If I recall correctly, that was also the last year USAC had a Midwest champion and an Eastern champion. Parnelli won the Midwest title, and some guy named Foyt won the No. 1 in the East. The thing I remember most is the battles they had on the high-banked track there, as well as at Winchester and Dayton – Parnelli in that Fike Chevy and AJ Foyt driving the Offy-powered Bowes Seal Fast Special.