After nearly three years away from the NASCAR Xfinity Series, Korbin Forrister returns to the circuit in this weekend’s Dover International Speedway doubleheader, driving the No. 36 for DGM Racing. Forrister, a mostly part-time competitor in the Gander RV & Outdoors Truck Series since 2014 (including seven starts in 2020), …

END_OF_DOCUMENT_TOKEN_TO_BE_REPLACED 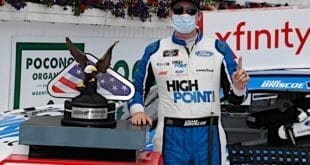 The NASCAR Xfinity Series took to the Tricky Triangle on Sunday afternoon, the second race of a tripleheader across the sport’s three major divisions. Chase Briscoe scored his fourth win of 2020, rebounding nicely after spinning from the lead on lap 70. Briscoe suffered a flat tire and was forced …

END_OF_DOCUMENT_TOKEN_TO_BE_REPLACED

Much as ESPN's focus was on the Chase and the drivers contending for it, the action at the front of the pack was largely veteran, with the rookies in the field left to run their own races and to figure out an already difficult circuit under the lights. And while Logano managed to crack the top 15 and run with the leaders (including eventual race winner Kasey Kahne), the ever-changing track conditions at Atlanta proved too much for even the Rookie of the Year leader, as the No. 20 car lost their handle and faded late.

END_OF_DOCUMENT_TOKEN_TO_BE_REPLACED

In Friday’s Driver Diary, Scott Speed gave the Frontstretch faithful a little insight into how he would perform this weekend when he wrote that he that believed he had a car better than what the team brought to Bristol earlier in 2009. Well, it may have not looked that way early on, but this driver and team ran the half-mile exactly the way they should have and were rewarded in the end. Speed did not overdrive the car and kept his nose clean while providing effective feedback to his crew chief.

END_OF_DOCUMENT_TOKEN_TO_BE_REPLACED

I mentioned last week that I was impressed by Joey Logano’s ability to improve through out the course of a race and while the finish wasn’t as pretty this week, the run was almost as notable. The No. 20 car looked like junk for the first half of the race, barely hanging on outside of the top 30. Just past the halfway mark, Greg Zipadelli’s call to get his driver back on the lead lap appeared to give the team the momentum boost they desperately needed. Once they learn to come out of the gate faster, I guarantee Logano will be racing for top 10s instead of top 20s at the end of each event.

END_OF_DOCUMENT_TOKEN_TO_BE_REPLACED

Plenty of people were wondering when we would see this new, bright young star named Joey Logano live up to the hype. Well, we started to get a glimpse of his talent today - but it wasn’t because of where he finished but rather, how he got there that showed it. In an afternoon full of carnage and failing equipment, Logano displayed the poise and maturity of a 10-year veteran, avoiding problems and ensuring that he stuck around until the end.