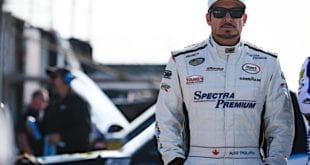 As the NASCAR Gander Outdoors Truck Series heads north of the border to Canadian Tire Motorsports Park, it has one of the shortest entry lists of the season with only 28 as of press time. Additionally, there will be six drivers who can be considered road course ringers, something that’s …

END_OF_DOCUMENT_TOKEN_TO_BE_REPLACED 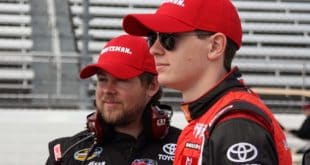 Christian Eckes is officially a pole winner in the NASCAR Gander Outdoors Truck Series. The 18-year-old topped the charts on Friday evening (Feb. 15) with a speed of 182.604 miles per hour in just his fifth Truck Series attempt. He’ll start from the pole for the NextEra Energy Resources 250 …

END_OF_DOCUMENT_TOKEN_TO_BE_REPLACED

The Camping World Truck Series may be sitting silent this week, awaiting its return at Kansas Speedway in three weeks, but the Xfinity and Sprint Cup series are headed off to Bristol Motor Speedway for a little short-track showdown. As is the case with pretty much every extended downtime, very …

END_OF_DOCUMENT_TOKEN_TO_BE_REPLACED

*In a Nutshell:* Johnny Sauter took the checkered flag 2.474 seconds ahead of Matt Crafton to win the Las Vegas 350 at Las Vegas Motor Speedway Saturday night. Sauter took the lead for the final time with 17 laps remaining and never looked back on the way to his first career Camping World Truck Series win. Jason White, Todd Bodine and Timothy Peters rounded out the Top 5.

END_OF_DOCUMENT_TOKEN_TO_BE_REPLACED

*In a Nutshell:* Kyle Busch took the checkered flag 2.721 seconds ahead of Matt Crafton to win the O'Reilly 200 Wednesday night at Bristol Motor Speedway. Busch took the lead from Jason White on lap 124 and never looked back on the way to his third Camping World Truck Series victory this season. Ron Hornaday, Jr, Ryan Newman and Brian Scott rounded out the top 5. *Who Should Have Won:* Mike Skinner. The driver of the No. 5 Exide Toyota started on the outside pole and pulled to commanding lead when the green flag flew. Despite multiple challenges by pole sitter Ryan Newman, Skinner remained in the top spot until pit stops under the first caution flag.