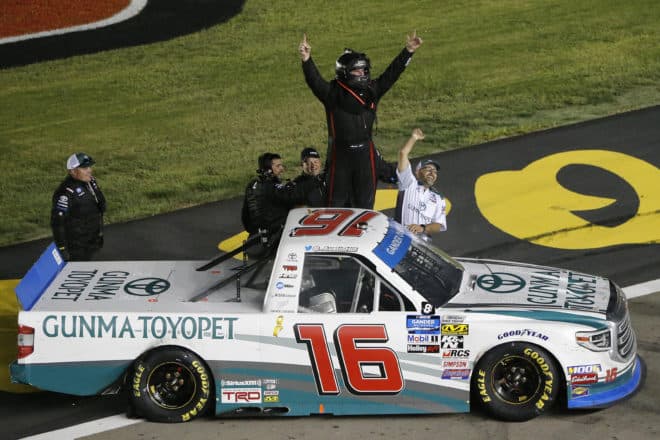 In a Nutshell: Austin Hill scored his third win of the 2019 NASCAR Gander Outdoors Truck Series season with a 2.116-second victory over Ross Chastain in Friday night’s World of Westgate 200 at Las Vegas Motor Speedway. The driver of the No. 16 Hattori Racing Toyota restarted 20th on lap 87 restart after a late …

Both the NASCAR Nationwide and Sprint Cup Series were off this weekend, but the NASCAR Camping World Truck Series headed to Darlington Raceway.

Kasey Kahne took the checkered flag 1.116 seconds ahead of Ron Hornaday Jr. to win the Too Tough to Tame 200 Saturday evening at Darlington Raceway.

Following a questionable non-call last weekend in the season-opener, NASCAR has issued penalties in relation to the spoiler failure on Michael Waltrip’s winning No. 15 Toyota. The truck was found in violation of Sections 12-1 (Actions detrimental to stock car racing); 12-4-J (any determination by NASCAR Officials that the race equipment used in the event does not conform to NASCAR rules); and 20B-3.12E (rear spoiler did not meet specifications in post-race inspection).

Crew Chief Doug Howe was fined $25,000 and placed on probation until December 31st, and owner Billy Ballew was docked 25 owner points. Waltrip will not receive a fine since he’s not running for the Truck Series championship, and his win will stand.

Before the green flag flies over the Truck Series field, it’s time to meet the 2011 rookie class.