Turn Back the Clock: 2008 ARCA Season And Justin Allgaier’s Championship 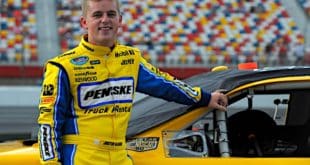 When it comes to the ARCA Menards Series, there have been seasons where future stars are born and brought into the picture. In 2008, Justin Allgaier earned the ARCA Re/Max Series championship battling the likes of Frank Kimmel, Matt Carter, Ricky Stenhouse Jr., and Scott Speed. The 2008 season saw …

END_OF_DOCUMENT_TOKEN_TO_BE_REPLACED

Despite the best efforts of Kyle Busch to run him down, Carl Edwards topped a dominant evening with his 35th career Nationwide Series win Saturday night in front of a stellar crowd at the Atlanta Motor Speedway. Busch, Ricky Stenhouse Jr., Kevin Harvick and Kasey Kahne rounded out the top 5. Though Edwards led 101 of the 195 laps led en route to victory, side-by-side racing at the front of the field proved plentiful, with each of the drivers in the top 5 taking turns at the front. Goodyear seemed to get the tire situation under control after fielding rocks at Bristol a week ago, with the rubber proving to wear on the abrasive Atlanta service. Drivers throughout the field were seen visibly wrestling with loose race cars throughout the 300 miles.

END_OF_DOCUMENT_TOKEN_TO_BE_REPLACED

Saturday saw Richard Childress Racing's Nationwide program for the first time in 2009 resemble the juggernaut that Kevin Harvick took to nine wins and the 2006 Series crown. This time, however, the driver was Clint Bowyer, who in leading the final 83 laps scored a convincing win at Dover in the first of a three-race stint that the Cup regular is supposed to run to help turn around the performance of the team's No. 29 car. Though listening to Bowyer, you'd never know he was brought in for performance reasons. When asked why he ended up driving this race in favor of development prospect Steven Leicht, Bowyer's response was “It's my name on the car,” referring to a wager he won earlier in the year between fellow Holiday Inn drivers Jeff Burton and Leicht.

END_OF_DOCUMENT_TOKEN_TO_BE_REPLACED

All day at Richmond, through coverage of practice and qualifying, the hype was all over Kevin Harvick's No. 33 car and how he finally had the horses to run with Kyle Busch. There was also plenty of press regarding the charity competition within Joe Gibbs Racing between Busch and Denny Hamlin. Meanwhile, Carl Edwards only qualified 39th, made his way forward all night long, took the lead on lap 227 and never looked back, taking a win that few expected him to contend for with a broken foot and being relegated to a last-place start after suffering from spark plug issues.

END_OF_DOCUMENT_TOKEN_TO_BE_REPLACED

Saturday night’s race at Daytona was shaping up to be a tremendous finish, until a messy wreck on lap 96 stopped the battle at the front of the field and scattered debris and rescue equipment all over the 2.5 mile oval. And in their infinite wisdom, NASCAR chose not to red flag the race, instead settling for a green-white-checker finish. Still, the two lap shootout at the finish had all the potential in the world.

END_OF_DOCUMENT_TOKEN_TO_BE_REPLACED

After Brandon Whitt decided to step down as the driver of the No. 61 Specialty Racing Ford in the Nationwide Series ranks last week, ARCA Re/Max Series standout Matt Carter was tabbed as the team’s new driver. And just as his former ARCA owner, Larry Clement, couldn’t control his enthusiasm about having Carter return to his ARCA team for that series’ upcoming race at Iowa Speedway on the Inside ARCA radio program Wednesday, Specialty Racing owner/crew chief Doug Taylor was equally high on the new talent behind the wheel of his Ford.

END_OF_DOCUMENT_TOKEN_TO_BE_REPLACED

Sometimes, going faster and winning all comes down to going a bit slower. Whether or not that was Kyle Busch’s strategy doesn’t matter, because it worked. In a performance far departed from his stretch of eight consecutive Nationwide races leading the most laps, Busch started ninth on Saturday…and stayed there for a while. Rather than embarking on a bonsai charge to the front from the first lap, Busch was patient. Running in traffic for a while, the No. 18 team made adjustments to a degree and volume not seen from them in recent weeks, turning Busch’s car from a top 5 runner to the fastest piece in the field. And, thanks to those adjustments, Busch was able to pick off teammate Joey Logano (who dominated and led the most laps Saturday) on lap 165 and drive off to score his fifth win of 2009.

END_OF_DOCUMENT_TOKEN_TO_BE_REPLACED

The offseason certainly did not provide any off time for several members of the ARCA circuit, as many of the drivers changed teams, and teams themselves changed names. Perhaps the most notable Silly Season move involved Frank Kimmel, who will no longer pilot Larry Clement's familiar No. 46 Ford -- the team which Kimmel won nine ARCA championships with. Instead, the veteran has partnered with Cunningham Motorsports to form Kimmel Racing, and will now drive the No. 44 Dodge Charger. Taking Kimmel's place in the vaunted No. 46 is rookie Matt Carter, son of long-time Sprint Cup crew chief Travis Carter.