The NASCAR Xfinity Series is set to embark on its final restrictor-plate race of the season this weekend at Daytona International Speedway. With so many unknowns at plate events due to the style of racing, it’s the perfect time to deliver a breakdown of how the rookies have done this …

END_OF_DOCUMENT_TOKEN_TO_BE_REPLACED 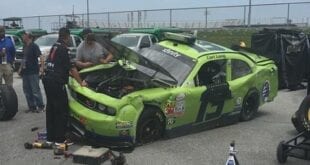 Another appeal heard; another penalty upheld. The National Motorsports Appeals Panel, Xfinity Series team Obaika Racing and NASCAR met on Wednesday to hear the appeal one of the penalties levied against the team following the Dover race weekend in May. A P3 penalty was announced by NASCAR the following week for …

END_OF_DOCUMENT_TOKEN_TO_BE_REPLACED

Trevor Bayne and Jennifer Jo Cobb were among five drivers among all three national NASCAR series to be penalized for infractions at Dover International Speedway last week. Both drivers were expected to be penalized on Wednesday for failing to stay within their vehicles after crashing out during competition at the …

END_OF_DOCUMENT_TOKEN_TO_BE_REPLACED

Eyes on Xfinity: Evaluating the Rookie Battle, 9 Races In

Youth is in the air. NASCAR’s future continues to show signs of fresh faces, along with a new generation of fans entering the sport. With so many drivers working through the rankings, opportunities have presented themselves for a select few to race against some of the best racers NASCAR has …

END_OF_DOCUMENT_TOKEN_TO_BE_REPLACED

After Brandon Whitt decided to step down as the driver of the No. 61 Specialty Racing Ford in the Nationwide Series ranks last week, ARCA Re/Max Series standout Matt Carter was tabbed as the team’s new driver. And just as his former ARCA owner, Larry Clement, couldn’t control his enthusiasm about having Carter return to his ARCA team for that series’ upcoming race at Iowa Speedway on the Inside ARCA radio program Wednesday, Specialty Racing owner/crew chief Doug Taylor was equally high on the new talent behind the wheel of his Ford.

END_OF_DOCUMENT_TOKEN_TO_BE_REPLACED

Déjà vu. Last year, Carl Edwards shook off a disastrous run at Kentucky and a weak start to his defense of the 2007 Nationwide title with a breakthrough win at the Milwaukee Mile. That’s exactly what happened on Saturday night, again. Edwards, who stalked the race leaders for much of the event, finally got past Kyle Busch with 44 laps to go, and never looked back, holding Busch off on two late race restarts to score his first Nationwide win of 2009.

END_OF_DOCUMENT_TOKEN_TO_BE_REPLACED

There’s no denying it. Any race that runs Charlotte’s crown oval is a very big deal. To any stock car racer from the Southeast, nay, in the country, Lowe’s Motor Speedway truly is a place of significance. And that’s no different for Peyton Sellers, a driver who knows a thing or two about racing in the sport’s backyard (the name of his team, Cardinal Motorsports, was born out of respect for his Virginia/North Carolina racing roots). Having grown up in Danville, VA, a literal stone’s throw from the Virginia/North Carolina border and cut his teeth on some of the region’s most renown short tracks, Lowe’s Motor Speedway has been on his radar long before his schedule for 2009 was announced. Says Sellers, “[Racing at LMS is] a dream come true.”

END_OF_DOCUMENT_TOKEN_TO_BE_REPLACED

It was business as usual at Richmond Friday night, as Kyle Busch in his No. 18 ran up front all night, led the most laps, and won the race. Busch, who led four times for 115 laps, had little trouble holding off Carl Edwards following a late restart in notching his third victory of the 2009 campaign. But, much like last season’s race at O’Reilly Raceway Park that saw Busch do the same thing on a short track, there was plenty of racing throughout the pack to make Friday night an enjoyable show.