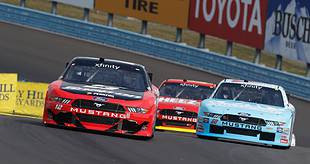 END_OF_DOCUMENT_TOKEN_TO_BE_REPLACED

When the green flag was waved for the Centurion at the Glen, Marcos Ambrose found himself tasked with having to overtake 42 Sprint Cup drivers at one of the toughest tracks on the circuit to pass -- nearly an impossible feat. However, after running near the top of the practice charts and taking home his first career NASCAR victory in the Nationwide Series race the day before, the Australian had a little bit of confidence in his fuel tank; and boy, did it pay off.

END_OF_DOCUMENT_TOKEN_TO_BE_REPLACED

After qualifying his Dodge Charger on the outside of row four for Sunday's race, it appeared that Juan Pablo Montoya was poised to have another strong run following his second-place finish at Indianapolis. In fact, Montoya did look strong throughout the first quarter of the race, remaining in or just outside of the top 10. But as the race wore on, so did Montoya's attention span, as at one point he made a remark about how long the race was. Struggling to keep his No. 42 machine on the bottom, the Rookie of the Year points leader began to fade, and he eventually wound up 16th in the final running order. Still, it was Montoya's 10th top finishing rookie honor in the 2007 season - leading all first-year drivers in that category.

END_OF_DOCUMENT_TOKEN_TO_BE_REPLACED

Tearing Apart the Trucks: History of the Truck Series

With the Craftsman Truck Series taking three weeks off after only two races, what is there for a truck racing columnist to do? I started thinking about how the Truck Series originated, and I learned one thing; I didn't have a clue. When I got into watching truck races, the series was well underway, so I turned back to the Truck Series' roots to see just what started it all.